Trust boundary is a term used in computer science and security which describes a boundary where program data or execution changes its level of "trust," or where two principals with different capabilities exchange data or commands. The term refers to any distinct boundary where within a system all sub-systems (including data) have equal trust. [1] An example of an execution trust boundary would be where an application attains an increased privilege level (such as root). [2] A data trust boundary is a point where data comes from an untrusted source--for example, user input or a network socket. [3]

A "trust boundary violation" refers to a vulnerability where computer software trusts data that has not been validated before crossing a boundary. [4] 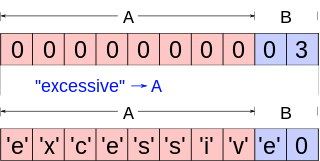 Static program analysis is the analysis of computer software performed without executing any programs, in contrast with dynamic analysis, which is performed on programs during their execution.

Software testing is the act of examining the artifacts and the behavior of the software under test by validation and verification. Software testing can also provide an objective, independent view of the software to allow the business to appreciate and understand the risks of software implementation. Test techniques include, but not necessarily limited to:

A software bug is an error, flaw or fault in computer software that causes it to produce an incorrect or unexpected result, or to behave in unintended ways. The process of finding and correcting bugs is termed "debugging" and often uses formal techniques or tools to pinpoint bugs. Since the 1950s some computer systems have been designed to deter, detect or auto-correct various computer bugs during operations.

Trusted Computing (TC), also often referred to as Confidential Computing, is a technology developed and promoted by the Trusted Computing Group. The term is taken from the field of trusted systems and has a specialized meaning. The core idea of trusted computing is to give hardware manufacturers control over what software does and does not run on a system by refusing to run unsigned software. With Trusted Computing, the computer will consistently behave in expected ways, and those behaviors will be enforced by computer hardware and software. Enforcing this behavior is achieved by loading the hardware with a unique encryption key that is inaccessible to the rest of the system and the owner.

A rootkit is a collection of computer software, typically malicious, designed to enable access to a computer or an area of its software that is not otherwise allowed and often masks its existence or the existence of other software. The term rootkit is a compound of "root" and the word "kit". The term "rootkit" has negative connotations through its association with malware.

Black-box testing is a method of software testing that examines the functionality of an application without peering into its internal structures or workings. This method of test can be applied virtually to every level of software testing: unit, integration, system and acceptance. It is sometimes referred to as specification-based testing.

A penetration test, colloquially known as a pen test or ethical hacking, is an authorized simulated cyberattack on a computer system, performed to evaluate the security of the system; this is not to be confused with a vulnerability assessment. The test is performed to identify weaknesses, including the potential for unauthorized parties to gain access to the system's features and data, as well as strengths, enabling a full risk assessment to be completed.

Fuzzing or fuzz testing is an automated software testing technique that involves providing invalid, unexpected, or random data as inputs to a computer program. The program is then monitored for exceptions such as crashes, failing built-in code assertions, or potential memory leaks. Typically, fuzzers are used to test programs that take structured inputs. This structure is specified, e.g., in a file format or protocol and distinguishes valid from invalid input. An effective fuzzer generates semi-valid inputs that are "valid enough" in that they are not directly rejected by the parser, but do create unexpected behaviors deeper in the program and are "invalid enough" to expose corner cases that have not been properly dealt with.

Fault tolerance is the property that enables a system to continue operating properly in the event of the failure of one or more faults within some of its components. If its operating quality decreases at all, the decrease is proportional to the severity of the failure, as compared to a naively designed system, in which even a small failure can cause total breakdown. Fault tolerance is particularly sought after in high-availability, mission-critical, or even life-critical systems. The ability of maintaining functionality when portions of a system break down is referred to as graceful degradation.

Mutation testing is used to design new software tests and evaluate the quality of existing software tests. Mutation testing involves modifying a program in small ways. Each mutated version is called a mutant and tests detect and reject mutants by causing the behavior of the original version to differ from the mutant. This is called killing the mutant. Test suites are measured by the percentage of mutants that they kill. New tests can be designed to kill additional mutants. Mutants are based on well-defined mutation operators that either mimic typical programming errors or force the creation of valuable tests. The purpose is to help the tester develop effective tests or locate weaknesses in the test data used for the program or in sections of the code that are seldom or never accessed during execution. Mutation testing is a form of white-box testing.

Fault injection is a testing technique for understanding how computing systems behave when stressed in unusual ways. This can be achieved using physical- or software-based means, or using a hybrid approach. Widely studied physical fault injections include the application of high voltages, extreme temperatures and electromagnetic pulses on electronic components, such as computer memory and central processing units. By exposing components to conditions beyond their intended operating limits, computing systems can be coerced into mis-executing instructions and corrupting critical data. In software testing, fault injection is a technique for improving the coverage of a test by introducing faults to test code paths; in particular error handling code paths, that might otherwise rarely be followed. It is often used with stress testing and is widely considered to be an important part of developing robust software. Robustness testing is a type of fault injection commonly used to test for vulnerabilities in communication interfaces such as protocols, command line parameters, or APIs.

A manifest file in computing is a file containing metadata for a group of accompanying files that are part of a set or coherent unit. For example, the files of a computer program may have a manifest describing the name, version number, license and the constituent files of the program.

API testing is a type of software testing that involves testing application programming interfaces (APIs) directly and as part of integration testing to determine if they meet expectations for functionality, reliability, performance, and security. Since APIs lack a GUI, API testing is performed at the message layer. API testing is now considered critical for automating testing because APIs now serve as the primary interface to application logic and because GUI tests are difficult to maintain with the short release cycles and frequent changes commonly used with Agile software development and DevOps.

Concolic testing is a hybrid software verification technique that performs symbolic execution, a classical technique that treats program variables as symbolic variables, along a concrete execution path. Symbolic execution is used in conjunction with an automated theorem prover or constraint solver based on constraint logic programming to generate new concrete inputs with the aim of maximizing code coverage. Its main focus is finding bugs in real-world software, rather than demonstrating program correctness.

In computer security and programming, a buffer over-read is an anomaly where a program, while reading data from a buffer, overruns the buffer's boundary and reads adjacent memory. This is a special case of violation of memory safety.