Trustly Group is a Swedish fintech company founded in 2008. [1] [2] Trustly is an open banking payment method that allows customers to shop and pay from their online bank account, without the use of a card or app. Its account-to-account network supports 6,300 banks, reaching 525 million consumers and bypassing the card networks.

Trustly provides its service to PayPal [3] and TransferWise, among other companies.

Trustly is used by more than 8,000 merchants including PayPal, Alibaba, Facebook, eBay, AT&T, Unicef, Dell, Lyft, GoFundMe, TransferWise, DraftKings, and eToro. In 2020, Trustly launched in Australia and Canada, adding to its existing coverage in Europe and the US. [4] Trustly generated revenue in 2019 totaling $150 million, up 58% from 2018. [5]

The company, originally named Glue Finance, [6] was founded in 2008 in Stockholm, Sweden, and signed contracts that same year with the first online retailers. A first investment round was completed in 2009, and development of a second generation technical platform was launched. The company underwent a geographical expansion in 2010 after which its revenues grew by more than 200%. [7] The first office outside of Sweden was opened in Malta and over one million transactions were processed the same year. The second generation platform was launched in 2011, and 25% of the company was sold to the investment group Alfvén & Didrikson. [8]

In 2014, the company entered into a strategic partnership with Groupon [9]  as well as PayPal. [10] The 10 million transactions mark was reached and the risk capital firm Bridgepoint Capital (BDC) invested €23 million to gain a minority stake. [11] [12]

The Swedish FinTech company ranked #242 on the publication's first ‘FT 1000: Europe’s Fastest Growing Companies’ list in 2017 based on its 3-year growth in revenue and staff. [14]

In March 2018, the private equity fund Nordic Capital bought a majority stake, some 70 percent of the existing shares, in Trustly. Ahead of the deal the company reportedly got valued at roughly €700 million. [15]

On June 10, 2020, Trustly announced a new round of investment from a consortium of investors, including BlackRock, which valued the company at close to $2 billion. [16]

In August 2020, Trustly expanded into Canada and Australia, marking its first step into the Asia-Pacific region. [17]

In April 2021, Trustly signalled their intention to list publicly on Nasdaq, Stockholm, seeking a valuation of almost $9bn. [18]

Trustly is a licensed payment institution authorized and supervised by the Swedish Financial Supervisory Authority. [19] It holds a European Payment Services Provider (PSP) license in accordance with the Payment Services Directive (PSD, 2007/64/EC).

Trustly faced criticism in 2013 from a competing bank when they used client information to log into the client's  Internet banking. The bank claimed that Trustly had gained access not only to the information required for performing the payment but also to information related to, for example, the client's mutual funds and shareholdings and therefore, banking confidentiality had been compromised. [20] The controversy has resurfaced in 2016 in Poland when PayPal switched to Trustly [21] and a number of information security related websites and banks pointed out that the Trustly's practice is inconsistent with PayPal's own guidance to avoid revealing the credentials to third parties. [22] [23] In 2018 Finnish Financial Supervisory Authority ruled that the screen scraping technique used by Trustly is illegal. [24]

Trustly defended itself by saying that the company sets out a clear agreement for what information the company may access for performing payments and establishing identity, in the same way as banks. Like the banks, Trustly is under the supervision of the Swedish Financial Supervisory Authority as a licensed Payment Institute. [20]

Nordea Bank Abp, commonly referred to as Nordea, is a European financial services group operating in northern Europe and based in Helsinki, Finland. The name is a blend of the words "Nordic" and "idea". The bank is the result of the successive mergers and acquisitions of the Finnish, Swedish, Danish, and Norwegian banks of Merita Bank, Nordbanken, Unidanmark, and Christiania Bank og Kreditkasse that took place between 1997 and 2001. The Nordic countries are considered Nordea's home market, having finalised the sales of their Baltic operations in 2019. The largest shareholder of Nordea is Sampo, a Finnish insurance company with 15.9% of the shares. Nordea is listed on Nasdaq Nordic exchanges in Helsinki, Copenhagen, and Stockholm and Nordea ADR is listed in the US. 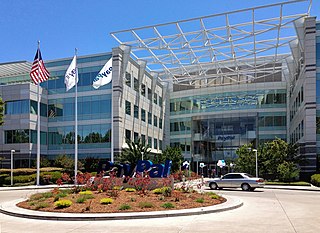 PayPal Holdings, Inc. is an American multinational financial technology company operating an online payments system in the majority of countries that support online money transfers, and serves as an electronic alternative to traditional paper methods such as checks and money orders. The company operates as a payment processor for online vendors, auction sites and many other commercial users, for which it charges a fee.

Online banking, also known as internet banking, web banking or home banking, is an electronic payment system that enables customers of a bank or other financial institution to conduct a range of financial transactions through the financial institution's website. The online banking system will typically connect to or be part of the core banking system operated by a bank to provide customers access to banking services in place of traditional branch banking. Online banking significantly reduces the banks' operating cost by reducing reliance on a branch network, and offers greater convenience to customers in time saving in coming to a branch and the convenience of being able to perform banking transactions even when branches are closed. Internet banking provides personal and corporate banking services offering features such as viewing account balances, obtaining statements, checking recent transactions, transferring money between accounts, and making payments. 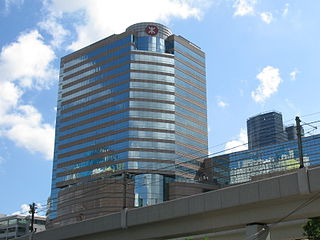 MTR Corporation Limited is a majority government-owned public transport operator and property developer in Hong Kong which operates the Mass Transit Railway, the most popular public transport network in Hong Kong. It is listed on the Hong Kong Exchange and is a component of the Hang Seng Index. The MTR additionally invests in railways across different parts of the world, including franchised contracts to operate rapid transit systems in London, Sweden, Beijing, Hangzhou, Macau, Shenzhen, Sydney, and a suburban rail system in Melbourne.

A non-performing loan (NPL) is a bank loan that is subject to late repayment or is unlikely to be repaid by the borrower in full. Non-performing loans represent a major challenge for the banking sector, as it reduces the profitability of banks, and is often presented as preventing banks from lending more to businesses and consumers, which in turn slows down economic growth.

Bridgepoint Group plc is a British private investment company listed on the London Stock Exchange and is a constituent of the FTSE 250 Index.

Sonali Bank Limited is the principal state-owned leading public commercial bank in Bangladesh. It is the largest bank of the country.

Adyen is a Dutch payment company that allows businesses to accept e-commerce, mobile, and point-of-sale payments. It is listed on the stock exchange Euronext.

Klarna Bank AB, commonly referred to as Klarna, is a Swedish fintech company that provides online financial services such as payments for online storefronts and direct payments along with post-purchase payments. 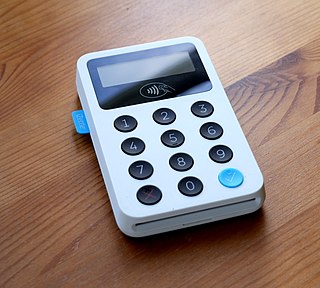 Zettle by PayPal is a Swedish financial technology company founded by Jacob de Geer and Magnus Nilsson in April 2010, and is now owned by PayPal. Launching its first app and service in 2011, the company offers a range of financial products including payments, point of sales, funding and partners applications.

Paytm is an Indian multinational technology company that specializes in digital payment system, e-commerce and financial services, based in Noida. Paytm is currently available in 11 Indian languages and offers online use-cases like mobile recharges, utility bill payments, travel, movies, and events bookings as well as in-store payments at grocery stores, fruits and vegetable shops, restaurants, parking, tolls, pharmacies and educational institutions with the Paytm QR code. As of 2020, Paytm is valued at US$16 billion, making it one of the highest valued fintech companies in the world.

PayU is a Netherlands-based payment service provider to online merchants. The company was founded in 2002 and is headquartered in Hoofddorp. It allows online businesses to accept and process payments through payment methods that can be integrated with web and mobile applications. As of 2018, the service is available in 17 countries. The firm is owned by the Naspers Group, which also owns a stake in one of its sister companies, Tencent.

Nordic Cinema Group is a Swedish company which owns 103 cinemas and 590 cinema saloons in six countries. It was founded in 2013 through a merger of Filmstaden in Sweden, Odeon Kino in Norway, Finnkino in Finland and Forum Cinemas in the Baltics. Between 2013 and 2017 it was owned by both Bridgepoint and Bonnier Group.