A twist tie is a fastener made of one or more metal wires encased in a thin strip of paper or plastic, in such a way that it can bend and retain its shape. It is used to tie the openings of containers including bags, such as garbage bags or bread bags. [1] [2] It is also called garden twist wire.[ citation needed ] A twist tie is used by wrapping it around the item to be fastened, then twisting the ends together. [1] They are often included with boxes of plastic food bags or trash bags, and are commonly available individually in pre-cut lengths, on large spools, or in perforated sheets called gangs. [2]

The outer covering can be in a variety of colors with or without printing. [1] Plain paper, metallic paper, plastic, poly, or custom coatings are popular for different applications. [1] The plastic, poly, or metallic paper twist ties withstand water better than the uncoated paper versions. Different sizes and strengths are used for different applications, from a small closure for a bag of bread to a large, heavy tie to hold unwieldy garden hoses in place. A twist tie with a broad paper covering may also be used for labeling.

The wire is often made of stainless steel or galvanized steel with a diameter between 19 and 31 (American standard wire gauge). [2] 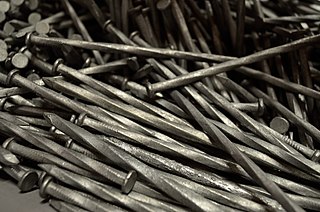 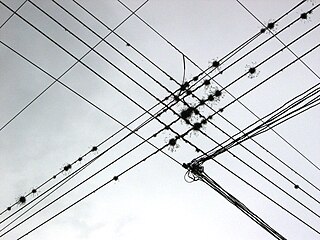 A wire is a single, usually cylindrical, flexible strand or rod of metal. Wires are used to bear mechanical loads or electricity and telecommunications signals. Wire is commonly formed by drawing the metal through a hole in a die or draw plate. Wire gauges come in various standard sizes, as expressed in terms of a gauge number. The term 'wire' is also used more loosely to refer to a bundle of such strands, as in "multistranded wire", which is more correctly termed a wire rope in mechanics, or a cable in electricity. 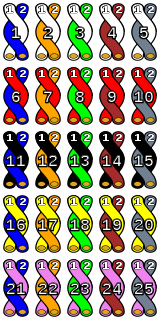 A perforation is a small hole in a thin material or web. There is usually more than one perforation in an organized fashion, where all of the holes collectively are called a perforation. The process of creating perforations is called perforating, which involves puncturing the workpiece with a tool. 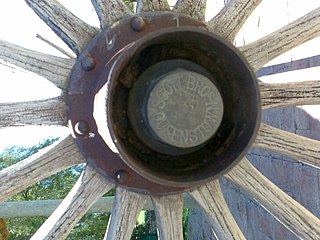 A hubcap is a decorative disk on an automobile wheel that covers at least a central portion of the wheel, called the hub. An automobile hubcap is used to cover the wheel hub and the wheel fasteners to reduce the accumulation of dirt and moisture. It also has the function of decorating the car. 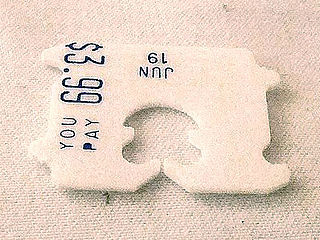 A bread clip is a device used to hold plastic bags closed, such as the ones in which sliced bread is commonly packaged. They are also commonly called bread tags, bread tabs, bread ties or bread-bag clips. By sealing a bag more securely than tying or folding over its open end, the clip or tie may preserve its contents longer. In some cases, the color of the tag indicates the day on which it was baked, although there is no universal standard for the color code. 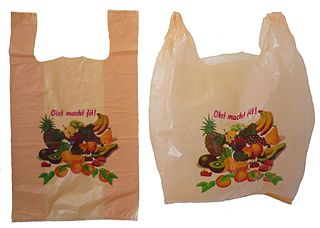 Plastic shopping bags, carrier bags, or plastic grocery bags are a type of plastic bag used as shopping bags and made from various kinds of plastic. In use by consumers worldwide since the 1960s, these bags are sometimes called single-use bags, referring to carrying items from a store to a home. However, reuse for storage or trash is common, and modern plastic shopping bags are increasingly recyclable. In recent decades, numerous countries have introduced legislation restricting the sale of plastic bags, in a bid to reduce littering and plastic pollution. 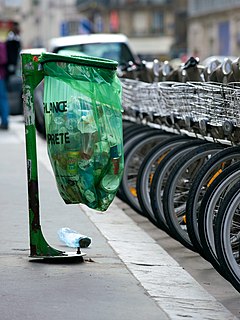 A plastic bag, poly bag, or pouch is a type of container made of thin, flexible, plastic film, Nonwoven fabric, or plastic textile. Plastic bags are used for containing and transporting goods such as foods, produce, powders, ice, magazines, chemicals, and waste. It is a common form of packaging. 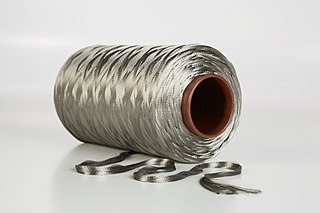 A bin bag, rubbish bag, garbage bag, bin liner, trash bag or refuse sack is a disposable bag used to contain solid waste. Such bags are useful to line the insides of waste containers to prevent the insides of the receptacle from becoming coated in waste material. Most bags these days are made out of plastic, and are typically black in color. 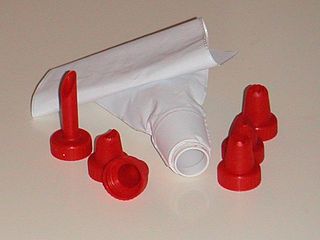 A pastry bag is an often cone- or triangular-shaped bag made from cloth, paper, or plastic that is squeezed by hand to pipe semi-solid foods by pressing them through a narrow opening at one end often fitted with a shaped nozzle, for many purposes including in particular cake decoration and icing. It is filled through a wider opening at the opposite end, rolled or twisted closed, and then squeezed to extrude its contents. Many differently shaped nozzles are used to produce cross-sections such as star, leaf, and flower-petal shapes; a simple circular nozzle makes round shapes and is also used for filling pastries such as profiteroles.

Plastic recycling is the process of recovering scrap or waste plastic and reprocessing the material into useful products. Since the majority of plastic is non-biodegradable, recycling is a part of global efforts to reduce plastic in the waste stream, especially the approximately 8 million metric tonnes of waste plastic that enters the Earth's ocean every year. 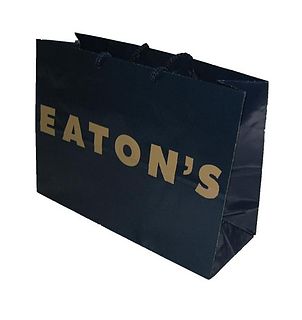 A paper bag is a bag made of paper, usually kraft paper. Paper bags are commonly used as shopping bags, packaging, and sacks.

Strapping, also known as bundling and banding, is the process of applying a strap to an item to combine, stabilize, hold, reinforce, or fasten it. The strap may also be referred to as strapping. Strapping is most commonly used in the packaging industry.

Kerbside collection or curbside collection is a service provided to households, typically in urban and suburban areas, of collecting and disposing of household waste and recyclables. It is usually accomplished by personnel using specially built vehicles to pick up household waste in containers that are acceptable to, or prescribed by the municipality, that are placed on the kerb. 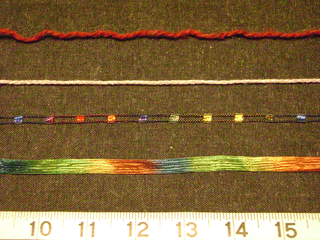 Novelty yarns include a wide variety of yarns made with unusual features, structure or fiber composition such as slubs, inclusions, metallic or synthetic fibers, laddering and varying thickness introduced during production. Some linens, wools to be woven into tweed, and the uneven filaments of some types of silk are allowed to retain their normal irregularities, producing the characteristic uneven surface of the finished fabric. Man-made fibres, which can be modified during production, are especially adaptable for special effects such as crimping and texturizing. 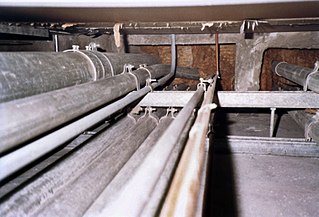