The Uganda AIDS Commission (UAC) is a national organization established by parliamentary statute in 1992. The Commission's main objective is to oversee the implementation of the national strategy to combat HIV/AIDS, adopted by the Government of Uganda in 1990. [1]

The unicameral Parliament of Uganda is the country's legislative body.

The Commission is situated under the Office of the President of Uganda. The current Chairman is Professor Vinand Nantulya. The Director General of the UAC is Dr. Christine Joyce Ondoa, a prominent consultant pediatrician and former Minister of Health (May 2011 - May 2013). [2]

Professor Vinand Mukatabala Nantulya, is a Ugandan physician, pathologist, medical researcher, entrepreneur and academic administrator, who since 3 October 2017, serves as the Chancellor of Busitema University, a public university in the Eastern Region of Uganda.

Christine Joyce Dradidi Ondoa is a physician and medical administrator who is regarded as one of Uganda's finest leaders especially in ensuring that the quality of health service delivery in Uganda is improved, and discipline and ethical code of conduct among health workers is observed. She is a Ugandan paediatrician and Christian Leader. She currently serves as the Director General of the Uganda AIDS Commission. She was appointed to that position by the President of Uganda in February 2014. Prior to that, she served as a Senior Presidential Advisor to President Yoweri Kaguta Museveni on Public Health. She was a member of the board of directors of the Global Alliance for Vaccines and Immunization (GAVI). She was Minister of Health in the Ugandan Cabinet from 2011 to 2013. She was appointed to that position on 27 May 2011, but was replaced by Ruhakana Rugunda on 23 May 2013. On account of being a cabinet minister she was a member of the Ugandan Parliament, in an ex officio capacity. Prior to that, she was the Executive Director of Mbarara Regional Referral Hospital, one of the fourteen regional referral hospitals in Uganda.

Rakai District is a district in the Central Region of Uganda. The town of Rakai is the site of the district's headquarters.

Adjumani District is a district in Northern Uganda. Like most other Ugandan districts, it is named after its 'chief town', Adjumani, where the district headquarters are located.

Christine Joy Maggiore was an HIV-positive activist and promoter of AIDS denialism. She was the founder of Alive & Well AIDS Alternatives, an organization which disputes the link between HIV and AIDS and urges HIV-positive pregnant women to avoid anti-HIV medication. Maggiore authored and self-published the book What If Everything You Thought You Knew about AIDS Was Wrong?

Noerine Kaleeba is a Ugandan physiotherapist, educator and AIDS activist. She is the co-founder of the AIDS activism group "The AIDS Support Organization" (TASO). She is currently a program development adviser for the Joint United Nations Programme on HIV/AIDS (UNAIDS). She is also the Patron of TASO. 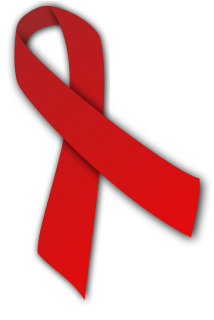 AIDS, caused by the human immunodeficiency virus (HIV), has become a global health issue, and various ways are being explored in order to combat the spread of the disease. One such way to somewhat limit the spread of AIDS is through education. Societies with significant number of HIV positive individuals and people that have been diagnosed with having cases of AIDS are societies in which education about the disease is limited to almost non-existent and where culture and tradition clash with modern medicine. Thus, education and training are of great importance and a number of organizations have been formed within the past two decades. Organizations vary from being government funded to private and/or are formed by health and social advocates. Organizations provide range of services from support for families and individuals affected by the disease, classes in academic settings ranging from preschools to universities, available resources to updates on the latest advances in medical treatments. 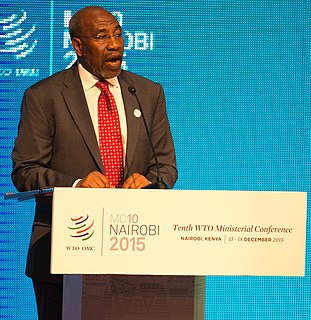 Ruhakana Rugunda is a Ugandan politician who has been Prime Minister of Uganda since 2014. A physician by profession, he held a long series of Cabinet posts under President Yoweri Museveni beginning in 1986. He served as Uganda's Minister of Foreign Affairs from 1994 to 1996 and as Minister of Internal Affairs from 2003 to 2009. Subsequently, he was Permanent Representative to the United Nations from 2009 to 2011 and Minister of Health from 2013 to 2014.

Abstinence, be faithful, use a condom, also known as the ABC strategy or abstinence-plus sex education, also known as abstinence-based sex education, is a sex education policy based on a combination of "risk avoidance" and harm reduction which modifies the approach of abstinence-only sex education by including education about the value of partner reduction safe sex and birth control methods. Abstinence-only sex education is strictly to promote the sexual abstinence until marriage, and does not teach about safe sex or contraceptives. The abstinence-based sex education program is meant to stress abstinence and include information on safe sex practices. In general terms, this strategy of sex education is a compromise between abstinence-only education and comprehensive sex education. The ABC approach was developed in response to the growing epidemic of HIV/AIDS in Africa, and to prevent the spread of other sexually transmitted diseases. This approach has been credited by some with the falling numbers of those infected with AIDS in Uganda, Kenya and Zimbabwe, among others. From 1990 to 2001 the percentage of Ugandans living with AIDS fell from 15% to between 5 and 6%. This fall is believed to result from the employment of the ABC approach, especially reduction in the number of sex partners, called "Zero-Grazing" in Uganda.

Nakaseke District is a district in Central Uganda. It is named after Nakaseke, the largest town in the district. However, the district headquarters are located at Butalangu.

The very high rate of HIV infection experienced in Uganda during the 1980s and early 1990s created an urgent need for people to know their HIV status. The only option available to them was offered by the National Blood Transfusion Service, which carries out routine HIV tests on all the blood that is donated for transfusion purposes. Because the need for testing and counseling was great, a group of local non-governmental organizations such as The AIDS Support Organisation (TASO), Uganda Red Cross, Nsambya Home Care, the National Blood Bank, the Uganda Virus Research Institute together with the Ministry of Health established the AIDS Information Centre in 1990 to provide HIV testing and counseling services with the knowledge and consent of the client involved.

Like other countries worldwide, HIV/AIDS is present in Ghana. As of 2014, an estimated 150,000 people infected with the virus. HIV prevalence is at 1.37 percent in 2014 and is highest in the Eastern Region of Ghana and lowest in the northern regions of the country. In response to the epidemic, the government has established the Ghana AIDS Commission which coordinates efforts amongst NGO's, international organizations and other parties to support the education about and treatment of aids throughout Ghana and alleviating HIV/AIDS issues in Ghana.

Mount Saint Mary's College Namagunga is an all-girl boarding school located in Mukono District in Uganda. The school is affiliated with the Roman Catholic Diocese of Lugazi.

AIDS Information Centre-Uganda (AIC) is a Non-Governmental Organization in Uganda established in 1990 to provide Voluntary Counseling and Testing (VCT) for Human Immune Deficiency Virus (HIV). The Organization was founded as a result of growing demand from people who wanted to know their HIV status. At this time the HIV/AIDS in Uganda was high.

The AIDS Support Organization (TASO) is an indigenous HIV and AIDS service initiative, registered in Uganda as a non-governmental organisation. It is a pioneer non-public actor in the HIV and AIDS response in Uganda. TASO is a membership organisation with over 4,000 subscriber members.

National AIDS Commission may refer to:

Cissy Kityo Mutuluuza,, is a Ugandan physician, epidemiologist, and medical researcher. She is the Deputy Executive Director of the Joint Clinical Research Centre, a government-owned medical research institution in Uganda, specializing in HIV/AIDS treatment and management.

Christine Obbo is an Ugandan socio-cultural anthropologist. She attended school at Makerere University in Uganda, earning her BA and MA there. She went on to receive a doctorate at the University of Wisconsin. She was then a professor at Wheaton College and then Wayne State University, later becoming involved in activities with HIV/AIDS, gender, and policy issues.

Alyek Judith is a Ugandan politician and the district Woman Representative for Kole District in Uganda's 10th Parliament. She is a member of the National Resistance Movement on whose ticket she ran on in the 2016 general elections. She also serves as the Chairperson on the Committee on HIV/AIDS and related diseases.