Uist Camanachd is a shinty team from the Western Isles, Scotland. The club is based in North Uist but draws its players from the whole archipelago from Berneray to Eriskay.

Roots of shinty in Uist

Shinty died out in the Uists in the 1900s due to a difficulty in gaining access to the Camanachd Association's competitions and the rise of football after the First World War. The sport was once highly organised within the islands itself, with Tigharry being the final champions of Uist in 1907. [1] Due to a lack of trees, camans were made with sea weed stalks at the time.

Shinty returned to Uist on a permanent basis in the 1990s and the initiatives spearheaded at this time have resulted in a vibrant youth system alongside a senior team which claimed its first senior trophy by winning the Mod Cup in 2005 against Lewis Camanachd. The club is also involved in coaching shinty at local Feisean. [2]

At youth level, Uist has been making advances in recent years, with U-14 teams competing at National Development level, 2008 saw the team's best ever performance, finishing third. They also competed in the Minch Medal Tournament. [4]

In 2009, the youth teams will be competed in mainland competition on a full-time basis for the first time, playing against Skye B and Lochcarron. In August 2009, Uist hosted Skye but were defeated 12-0. [5]

In 2011, the club entered the Camanachd Association Development League, a new tier of shinty for developing clubs such as Uist. They played their first ever games as a senior side on the mainland against Strathspey Camanachd and Kinlochbervie Camanachd on 21 May 2011 at Beauly. The club lost in the HebCelt Cup match 3-2 to Lewis. The club competed for the Mod Cup in October 2011 but were defeated by Lewis Camanachd 2-0 on home soil.

In 2012, a sixes team competing as Uist came second in a six a-side tournament in Edinburgh. [7] Uist won the Hebcelt Cup on penalties in 2012.

Shinty in Uist over the last few years has been overtaken by developments in Lewis, but the club has exported players to the mainland and in 2018 won the HebCelt Cup for the first time since 2018.

On 3 November 2007, the club regained possession of the North Uist Shinty Challenge Cup, which had been in the possession of D.R. Macdonald for many years. The club is resurrected the tradition of New Year shinty in North Uist with a game between the Westside (An Taobh Siar) and the Eastside (An Taobh Sear) of the Island on Hogmanay 2007 to mark a hundred years since the trophy was last played for. The game took place at Paible School and the Eastside triumphed 9-0.

The trophy was contested again in 2008 with the Westside winning 8-1. In 2009, the Eastside won 7-5. In 2010, the match was won by the Eastside again but in a tight 6-3 contest. [8] The fixture is also complemented by the Lachlan McQuien Memorial Shield, an under-14 match between East and West dedicated to Lachlan McQuien, who was the last surviving player from the 1907 game and whose great-grandchildren are involved in the club today.

The fixture was not held in 2011 as the club were refused permission to use the usual venue on the scheduled date. [9]

The Camanachd Association is the world governing body of the Scottish sport of shinty. The body is based in Inverness, Highland, and is in charge of the rules of the game. Its main competitions are the Tulloch Homes Camanachd Cup and the Mowi Premiership and the Mowi Valerie Fraser Camanachd Cup.

The Hebridean Celtic Festival or HebCelt is an international Scottish music festival, which takes place annually in Stornoway on Lewis, in the Outer Hebrides of Scotland. Headliners to date include Runrig, Van Morrison, Deacon Blue, The Fratellis, The Levellers and KT Tunstall. Many other acts take part in the event, including visiting international artists, solo artists and local musicians. The festival regularly attracts over 16,000 attendees and provides significant economic and cultural benefits for its host area. 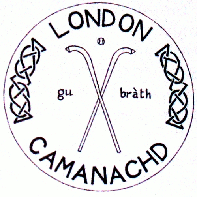 London Camanachd is a shinty club in England. They have historically been attached to the South District. They went into abeyance in 1992 but were reconstituted in 2005. They played the first officially recognised Shinty match outside Scotland in 80 years on Saturday 22 July 2006 against the Highlanders. Currently the club field men's and women's teams in English and Scottish competitions as well as exhibition matches in Europe, most recently in 2018 in Brussels.

Lochcarron Camanachd is a shinty club from Wester Ross, Scotland.

Glasgow Mid Argyll Shinty Club (GMA) is a shinty club from Glasgow, Scotland. It is the only senior side in Glasgow and was founded in 1928. They have two men's sides and two women's sides. All GMA teams play at Peterson Park.

Strathglass Shinty Club or "Comunn Camanachd Straghlais" in Scottish Gaelic is a shinty club from Cannich, Inverness-shire. The Club was founded in 1879, is considered to be the oldest constituted club in shinty and played a major role in the development of the rules of the sport. The first team plays in National Division One but played in the Marine Harvest Premier Division after two successive promotions from the old North Division One from 2006 to 2008. The club restarted its second team in 2017, and there is a successful women's team, started in 2006.

Aberdeen University Shinty Club is a shinty club from Aberdeen, Scotland, that plays in Marine Harvest North Division One. It is the oldest constituted shinty club in Scotland, and therefore the world, dating back to November 9, 1861 in a document held by the University of Aberdeen. The club celebrated its 150th anniversary in 2011. The team is the current champion of North Division Two.

Shinty was played in its original form throughout North and South America by Scottish settlers until the early 1900s when the practice died out. Shinty, and its close Irish relative hurling as well as the English bandy, are recognised as being the progenitors of ice hockey and are an important part of North America's modern sporting heritage. 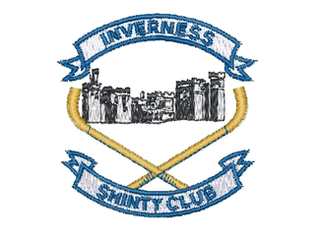 Inverness Shinty Club is a shinty club from Inverness, Scotland. The first team competes in North Division One and the second team in North Division Three. Founded in 1887 as Inverness Town and County Shinty Club to distinguish from other clubs in Inverness such as Clachnacuddin, Inverness moved to the Bught Park in 1934. Inverness won the Camanachd Cup in 1952. The club struggles to compete for players with the wide proliferation of football clubs in Inverness, in particular Inverness Caledonian Thistle but still manages to put out two teams.

Lewis Camanachd, or Comann Camanachd Leòdhais in Scots Gaelic, is the senior shinty team from the Isle of Lewis, Scotland. The club entered North Division Three for the first time in 2011. This was the first time a team from the Western Isles was allowed to compete in league shinty. However, the club was only allowed in on trial and awaited a decision from the Camanachd Association as to whether this was to become a permanent arrangement. Lewis was granted entry on a permanent basis from 2012.

Naver Athletic Camanachd Club was a shinty club based in Bettyhill, Sutherland, Scotland established in 2008. It was a select team drawing players from both Sutherland and Caithness. Naver competed in the Strathdearn and Sutherland Cups in 2008.

The Mod Cup, also known as the Aviemore Cup is a trophy in the sport of shinty first competed for in 1969, traditionally played for by the two teams who are based closest to the host venue of the Royal National Mod. The current holders are Glasgow Mid-Argyll.

Women's shinty is a sport, played almost entirely within Scotland, identical to the men's game – with the same rules, same sized pitch and same equipment. However, its history is significantly different. Social pressures – along with the broader game's self-image – resulted in a largely hidden history until comparatively recently.

The Balliemore Cup is a knock-out cup in the sport of shinty. It is the Intermediate Championship run under the auspices of the Camanachd Association and only first teams competing in the National, North Division One and South Division One are eligible for entry.

Strathspey Camanachd is a shinty club based in Grantown-on-Spey, Strathspey, Scotland, currently competing in the Marine Harvest North Division Two.

The WCA National Division One is the top league for women in the sport of shinty, and is run by the Women's Camanachd Association. Below that from season 2016 there was a return to regional second level set-up with a WCA North Division 2 and WCA South Division 2. All three leagues are sponsored by Marine Harvest. This progression is evidence of the fact that women's shinty is the fastest growing section in Scotland's oldest sport.