Ulestraten (Limburgish : Ulesjtraote) is a village in the Dutch province of Limburg. It is located in the municipality of Meerssen. It is surrounded by several forests.

Ulestraten was a separate municipality until 1982, when it was merged with Meerssen. [1]

Meerssen is a place and a municipality in southeastern Netherlands.

Nuth is a village and was a municipality in the province of Limburg, situated in the southern Netherlands. In January 2019, the municipality merged with Schinnen and Onderbanken to form Beekdaelen. 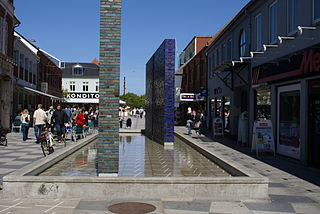 Holstebro Municipality is a municipality in Region Midtjylland on the Jutland peninsula in west Denmark. The municipality covers an area of 801.55 km2 (309.48 sq mi), and has a population of 57,411. Its mayor is H. C. Østerby, a member of the Social Democratic party. 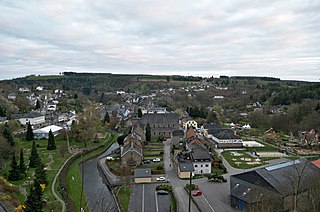 Houffalize is a Walloon municipality of Belgium in the province of Luxembourg. On 1 January 2007 the municipality, which covers 166.58 square kilometres (64.32 sq mi), had 4,802 inhabitants, giving a population density of 28.8 inhabitants per km².

Jan Jozef Alfons Franciscus Krekels is a retired cyclist from the Netherlands. He became Olympic champion in the 100 km team time trial in 1968 with Joop Zoetemelk, René Pijnen and Fedor den Hertog; at the same Games he came in 11th in the road race. He also won the 19th stage of the Tour de France in 1971 and the prologue of Paris–Nice in 1970. He retired from professional cycling in 1978.

Bunde is a village in the Dutch province of Limburg. It is located in the municipality of Meerssen, about 2 km northwest of Meerssen itself.

Geulle is a village in the Dutch province of Limburg. It is located in the municipality of Meerssen, about 8 km southwest of Geleen.

Gerben Karstens is a former professional racing cyclist from the Netherlands, who won the gold medal in the 100 km team trial at the 1964 Summer Olympics, alongside Bart Zoet, Evert Dolman, and Jan Pieterse. At the same Olympics he finished 27th in the individual road race. Karstens ranks 6th in all-time stage wins in Vuelta a España history.

Gerard Veldscholten is a Dutch former professional road bicycle racer. In 1985 he placed 2nd in the Dutch National Championship and also performed well in the 1985 UCI Road World Championships finishing within the group just three seconds behind winner Joop Zoetemelk. In 1988 he finished 7th in Paris-Roubaix and won the Tour de Romandie.

Heerlen is a railway station located in Heerlen, Netherlands. 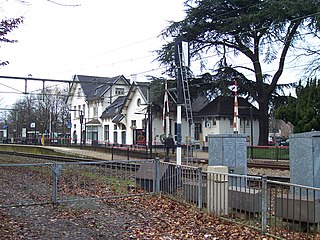 Meerssen railway station is located in Meerssen, the Netherlands. The station opened on 23 October 1853 on the Maastricht–Aachen railway. The original station building was enlarged in 1900.

Sigulda Municipality is a municipality in Vidzeme, Latvia. The municipality was formed in 2003 by merging Sigulda town, Sigulda Parish and More Parish. In 2009 it absorbed Allaži parish, too; the administrative centre being Sigulda. The population in 2020 was 17,992.

South Limburg is both a COROP (statistical) region as well as a landstreek (area) of the Netherlands located in the province of Limburg. The Dutch term landstreek, literally translated "land area/region", means that the area is not an administrative region but an area that displays cohesion with regard to culture and landscape. With regards to South Limburg this deals with its hilly landscape, especially in the Heuvelland region, sunken lanes, an abundance of castles, and the regional language Limburgish spoken by a significant part of the population alongside Dutch. The region also contains the highest point above sea level in mainland Netherlands, the Vaalserberg being 322.5 metres (1,058 ft) above sea level. 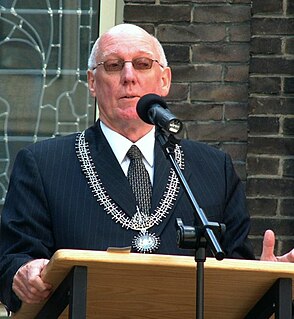 Martinus Johannes Maria "Tiny" Ruys is a Dutch football coach who has managed SV Meerssen since 2015.