The Ulla Viaduct is a composite truss bridge that spans the Ulla river, in Galicia, northern Spain. It is a part of the Atlantic Axis, a high-speed rail line.

The bridge is a composite featuring a steel truss built on a concrete deck. In addition to the three main spans, there are four more minor spans on each side, three of them 120 meters in length, the other five 80 meters. One side also has an extra span on one side of 50 meters. Only the main spans are supported by pillars in the riverbed, all of the ancillary spans are anchored on the banks on either side.[ citation needed ]

The union pillar-deck of the main spans of the viaduct is rigid, something which is typically avoided to prevent the movement of the spans from applying torque to the pillars, but because the spans are different lengths, their motion cannot be compensated for in the center of the bridge and so the rigid spans allow for the pillars instead to compensate and maintain the stability of the bridge. Usually forces within the bridge end up transferred to the shorter span as a result of this.[ citation needed ]

To ensure that the pillars are capable of dealing with these greater forces resulting from the uneven lengths of spans, the fifth and ninth pillars were built with two parallel walls instead of the ordinary designs used on the other pillars. Because this concentrates the mass of those pillars along the edges, it saved on the concrete necessary to improve those pillars' resistance to being torqued by the spans.[ citation needed ]

The viaduct is located in the section of the railway line between Villagarcía and Arousa-Padrón. Since it is near the Arosa Estuary, which has extraordinarily beautiful surroundings subjected to strict environmental protection, it induced the Directorate General for Railways to shortlist an ideas competition. The constructive project that won the competition was realized by IDEAM, the construction management was done by ADIF Alta Velocidad and the Dirección General de Ferrocarriles - Ministerio de Fomento, and finally, the construction work was done by UTE Dragados-TECSA. The project managers were Rubén A. Estévez (ADIF AV) and Marina Soler (Ineco), along with Imanol Güemes as the construction manager. The viaduct began operation on March 30, 2015.[ citation needed ]

The viaduct currently holds the world record in the typology of high-speed composite truss bridge, beating the Nantenbach Bridge over the Main in Germany, which had held the record since 1993 with a 208m span.[ citation needed ]

It is a finalist in the Outstanding Structure Award 2016, managed by the International Association for Bridge and Structural Engineering (IABSE). This award recognize the most prominent and outstanding structures around the world and it is the first time that a structure designed and constructed in Spain has received this award.[ citation needed ]

It has also received the San Telmo award in 2015, by the Colegio de Ingenieros de Caminos, Canales y Puertos de Galicia, which distinguishes the best engineering structures constructed in the Comunidad Autónoma de Galicia, taking into account its technical quality, construction procedure and impact on the Galician society.[ citation needed ] 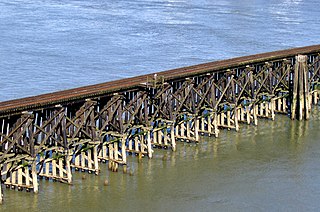 A trestle bridge is a bridge composed of a number of short spans supported by closely spaced frames. A trestle is a rigid frame used as a support, historically a tripod used both as stools and to support tables at banquets. Each supporting frame is a bent. A trestle differs from a viaduct in that viaducts have towers that support much longer spans and typically have a higher elevation.

The Kap Shui Mun Bridge (KSMB) in Hong Kong, part of Lantau Link of Route 8, is one of the longest cable-stayed bridges in the world that transports both road and railway traffic, with the upper deck used for motor vehicles and the lower deck used for both vehicles and the MTR. It has a main span of 430 metres (1,410 ft) and an overall length of 750 metres (2,460 ft). It spans the Kap Shui Mun marine channel between Ma Wan and Lantau and has a vertical clearance of 47 metres (154 ft) above sea level. The bridge was completed in 1997.

The Philadelphia & Reading Railroad Bridge carries Norfolk Southern rail lines across the Susquehanna River between Cumberland County, Pennsylvania and Harrisburg, Pennsylvania. Some of its concrete piers encase stone masonry piers from an earlier truss bridge on this site, completed in 1891 by the Philadelphia, Harrisburg and Pittsburgh Railroad, which was then acquired by the Philadelphia and Reading Railroad to connect its Harrisburg and Lurgan lines. The current structure was constructed from 1920 to 1924 by replacing the trusses with concrete arches one track at a time. The bridge has fifty-one concrete arches, three more than the nearby Rockville Bridge. 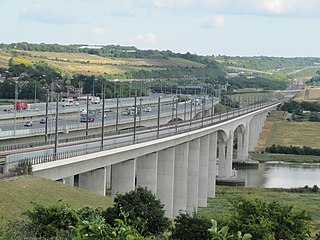 The Medway Viaducts are three bridges or viaducts that cross the River Medway between Cuxton and Borstal in north Kent, England. The two road bridges carry the M2 motorway carriageways. The other viaduct carries the High Speed 1 railway line. All three bridges pass over the Medway Valley Line.

Borodinsky Bridge is a steel plate girder bridge that spans Moskva River, connecting Dorogomilovo District and Kievsky Rail Terminal with the centre of Moscow, Russia. The bridge was built in 1911–1912 as deck arch bridge by N.I. Oskolkov, M.I. Schekotov and Roman Klein. In 2001, the bridge was reconstructed, replacing arches and deck with a plate girder structure.

The Schierstein Bridge is 1,282-meter (4,206 ft) long, four-lane highway bridge in Germany. It carries Bundesautobahn 643 over the Rhine River between Mainz-Mombach, Rhineland-Palatinate and Wiesbaden-Schierstein, Hesse. Crossing two arms of the Rhine and the intervening island of Rettbergsaue, the bridge is made of six individual structures, including 100 m (330 ft) from prestressed concrete. It was built between 1959 and 1962.

The Langwieser Viaduct is a single track reinforced concrete railway bridge spanning the Plessur River and the Sapünerbach, near Langwies, in the Canton of Graubünden, Switzerland.

The Castielertobel Viaduct is a single track railway bridge spanning the Castielertobelbach, and linking the municipalities of Castiel and Calfreisen, in the Canton of Graubünden, Switzerland. It was built between 1913 and 1914 for the Chur–Arosa railway, and is now owned and used by the Rhaetian Railway.

Incremental launch is a method in civil engineering of building a complete bridge deck from one abutment of the bridge only, manufacturing the superstructure of the bridge by sections to the other side. In current applications, the method is highly mechanised and uses pre-stressed concrete.

The Sant Boi Bridge is the first steel structure in the high-speed railway joining the city of Madrid and Barcelona. 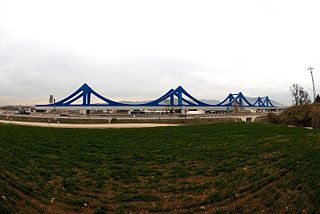 The Llinars Bridge this bridge is the first steel structure in the high-speed railway (HSR) joining Barcelona and the French Border. The 1883 ft long Llinars HSR bridge comprises two parts: a 1008 ft long composite steel–concrete structure crossing the highway, and a continuous prestressed concrete bridge crossing the Mogent River with a maximum span of 157 ft.

The Viaduct of Moresnet, also known as the Geul Valley bridge is a railway bridge above and on the southern side of the village of Moresnet, within the municipality of Plombières, close to the three-way Belgian frontier with Germany and the Netherlands.

The Hammer Bridge is a 220 metres (722 ft) long railway bridge on the Weser Valley line crossing the Geul valley a few hundred meters to the south of Hergenrath.

The Hølen Viaduct is a disused iron railway viaduct situated at Hølen in Viken county, Norway. The iron carried a single track of the Østfold Line over the river Såna and the valley where the village of Hølen is located. The viaduct was the first pendulum pillar bridge in the world, and was designed by the principle's inventor, Axel Jacob Petersson. It is 130.6 meters (428 ft) long.

The Hølendalen Bridges are three parallel concrete cantilever bridge which cross Hølendalen in Vestby, Norway. One carries two tracks of the Østfold Line, the other two carry four lanes of European Road E6. The bridges have four spans, the two in center at 128 meters (420 ft) and the two outer at 80 meters (260 ft). The overall lengths are 416 meters (1,365 ft). The bridges are up to 50 meters (160 ft) above the valley and the creek of Såna. 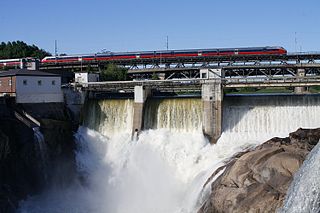 Sarp Bridge is a series of bridges which span across Sarpefossen, a waterfall of the river Glomma in Sarpsborg, Norway. In the current arrangement, one bridge carries a pathway, one carries a single track of the Østfold Line and one carries two lanes of National Road 118. The road and pathway bridges are about 91 meters (299 ft) long, while the railway bridge is 247 meters (810 ft).

Rupsha Railway Bridge is a railway bridge on Rupsha River under construction. This bridge will connect Khulna with Port of Mongla by railway network. Bangladesh Railway and Indian Larsen & Toubro Limited signed an agreement to construct the bridge. The bridge will be 5.13 kilometres (3.19 mi) long.

The King Louis Bridge spans the River Iller in the town of Kempten in the Allgäu in southern Germany. It was built by the Royal Bavarian State Railways in the middle of the 19th century. After being reconstructed and changed in use several times, the bridge is currently closed due to an assumed instability. 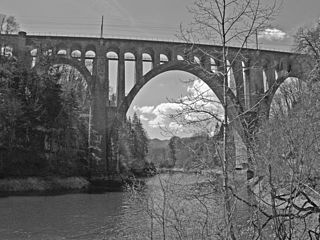 The Le Day viaduct is a railway viaduct in Vallorbe in the Jura-Nord vaudois District of the Swiss canton of Vaud. It stands near the hamlet of Le Day and crosses the Orbe. This has been dammed since 1955 by the Le Day dam, which lies 450 m downstream.

The Grandfey-Viaduct is on the railway line from Bern to Fribourg and is one of the largest bridges in Switzerland.