Umbarra, or King Merriman (died 1904) was an Aboriginal elder of the Djirringanj/Yuin people of the Bermagui area on the South Coast of New South Wales.

Although Aboriginal people traditionally did not have kings or chiefs, only elders, the white colonial powers used to often grant king plates to certain elders, hence the moniker King.

Umbarra lived on Merriman Island, in the middle of Wallaga Lake, while his people lived on the shores of the lake. Umbarra was believed to have clairvoyant abilities, and communicated with a black duck, his moojingarl or being with which he had a spiritual connection, which warned him of coming danger.

Umbarra provided information on the Yuin to Alfred William Howitt for Howitt's 1904 book The native tribes of South-East Australia. [1]

Umbarra's father, who was also associated with the black duck, is believed to have also been named Merriman and to have died around 1850. [1] His wife, Queen Narelle, died around 1900. [2] The brother of Umbarra and the brother of Narelle, despite being unrelated to one another, founded a single family, the Nobles. Yuin genealogist and researcher Dave Tout is a descendant of the Nobles. [1]

Many legends now exist about Umbarra and his moojingarl. One day it told him of a group of warriors coming from the far south to do battle. King Merriman remained on the island while the other men took the women and children to a place of safety and then hid in the reeds. The first to sight the approaching warriors, the King warned his men who fought a fierce battle but lost. The opposing tribesmen then set out for the island. [3]

King Merriman threw powerful spears, and a boomerang which severed the arms and heads of his opponents before returning to him, but it was not enough. He then turned himself into a whirlwind and flew off. He passed over the fierce Kiola tribe and their wise men correctly divined his presence and that it meant the defeat of the Wallaga people and the advance of another tribe. King Merriman journeyed on to the Shoalhaven tribe to warn them but the Kiola tribe defeated the invaders and the King, whose power was finished, stayed for a time at the Shoalhaven then travelled away. [3]

General access to Merriman Island is forbidden due to its great significance for Indigenous people – it was the first place to be gazetted as an Aboriginal site. A focus of tribal culture, the island is associated with the story of King Merriman, widely known among the Yuin Aborigines of the south coast.

Today, the Yuin operate the Umbarra Cultural Centre near the Lake. The former Wallaga Lake National Park is incorporated into Gulaga National Park.

Gulaga is a national park on the south coast of New South Wales, Australia. The park was created in 2001. It is 46.73 km2 in area. The park forms part of the Ulladulla to Merimbula Important Bird Area, identified as such by BirdLife International because of its importance for swift parrots.

Eurobodalla Shire is a local government area located in the South Coast region of New South Wales, Australia. The Shire is located in a largely mountainous coastal region and situated adjacent to the Tasman Sea, the Princes Highway and the Kings Highway. 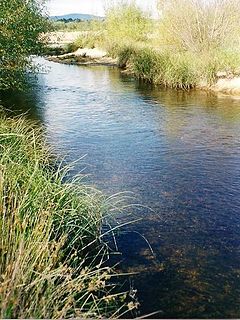 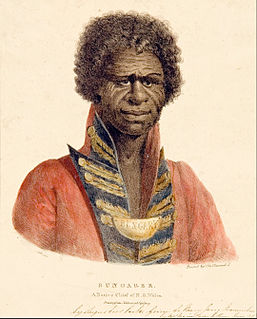 Aboriginal breastplates were a form of regalia used in pre-Federation Australia by white colonial authorities to recognise those they perceived to be local Aboriginal leaders. The breastplates were usually metallic crescent-shaped plaques worn around the neck by wearer. 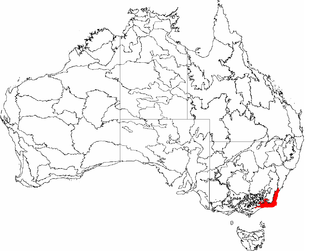 The ethnonym Yuin refers to a group of Australian Aboriginal people from the South Coast of New South Wales. All Yuin people share ancestors who spoke, as their first language, one or more of the Yuin language dialects, including Djiringanj, Thaua, Walbanga, Wandandian and Dhurga language, from Narooma to Nowra.

Mount Gulaga, also Gulaga,, a mountain located in the south coast region of New South Wales, Australia, rises above the village of Central Tilba and is within the Gulaga National Park. At its highest point, it measures 806 metres (2,644 ft) above sea level.

Nerrigundah is a small village on the Eurobodalla Nature Coast in south eastern New South Wales. Situated at the head of the Tuross River Valley, it is nineteen kilometres inland from Bodalla. At the 2016 census, Nerrigundah had a population of 25.

South Durras is a small village on the South Coast of New South Wales, Australia. South Durras is located approximately 280 kilometres south of Sydney and 15 kilometres north of Batemans Bay, in the local government area of Eurobodalla Shire. The village is surrounded by the Murramarang National Park.

The Thaua/Thawa, also spelt and also called Yuin-Djuin, were an Aboriginal Australian people living around the Twofold Bay area of the South Coast of New South Wales.

Edwin "Guboo" Ted Thomas of the Yuin people was a prominent Aboriginal (Koori) elder (leader), He lived a full life, including touring Australia with a gumleaf orchestra during the Great Depression of the 1930s, playing rugby league and getting banned for fighting a referee, yet growing to become an Elder campaigning for protection of sacred sites on the South Coast, who went to the United Nations in New York, who urged the World Council of Churches to accept indigenous religions, and who met the Dalai Lama. Guboo loved a "cuppa", had a sense of mischief, enjoyed being doted on by women, and his favourite saying was: "Always remember, the best is yet to come!".

The Wandandian were an indigenous Australian people of the South Coast of New South Wales with connections to the Yuin and Tharawal nations.

The Dhurga language, also written Thurga, is an Australian Aboriginal language of New South Wales. The language is tonal, and spoken in the Nowra-Jervis Bay area southwards to Narooma, and possibly as far south as Wallaga Lake.

Batemans Bay is an open oceanic embayment that is located in the South Coast region of New South Wales, Australia. The bay forms the mouth of the Clyde River and its primary outflow is to the Tasman Sea of the South Pacific Ocean.

The Brabiralung are an Indigenous Australian people, one of the five tribes of Gippsland, in the state of Victoria, Australia, belonging to a wider regional grouping known as the Kurnai.

The Tatungalung are an indigenous Australian people of the state of Victoria. They are often, together with the Bratauolung, Braiakaulung, Brabiralung and Krauatungalung classified as belonging to one nation, the Gunai/Kurnai, though this typology has been thought, by Norman Tindale, to be an artificial construct.

The Walbunja are an Aboriginal Australian people of New South Wales, part of the Yuin nation and MURRIM TERRITORY.

The Djiringanj, also spelt Dyirringañ, are an Aboriginal Australian people of the southern coast of New South Wales. They are one of a larger group, known as the Yuin people, who all speak or spoke dialects of the Yuin–Kuric group of languages. 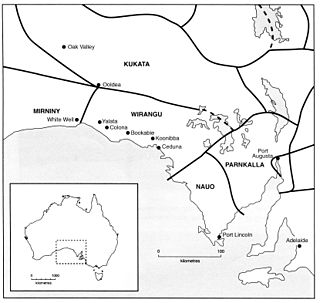 The Nauo people, also spelt Nawu and Nhawu, are an Aboriginal Australian people of the south-western Eyre Peninsula in South Australia. The Nauo language became extinct by the twentieth century, but efforts are being made to revive it.