Under the Yoke (Stirling novel)

Under the Yoke is a science fiction novel by American writer S. M. Stirling, [1] [2] the second of four books in his alternate history series The Domination. It was first published in the United States on September 1, 1989.

Tanya von Shrakenberg, a Draka, establishes a plantation in the formerly-French Touraine after the Drakan subjugation of Continental Europe. Her slaves include Marya Sokolowska and Chantal Lefarge, formerly a Polish nun and a French Communist respectively. Fred Kustaa, an agent for the Alliance secret service (the OSS), is involved in the effort to keep a resistance movement alive in Europe. He smuggles weapons to guerillas in Finland, and later attempts to smuggle out the German professor Ernst Oerbach, who has vital knowledge on nuclear fusion. Marya Sokolowska is Fred's contact in this second mission. Meanwhile, Chantal is raped by Tanya's husband, and impregnated with twins. Fred attempts to flee, but fails, leading to the deaths of Fred, Marya, and Ernst. Chantal manages to escape to the United States on a submarine. In New York City, she gives birth to Fred and Marya Lefarge (named after her rescuers), who would be the protagonists of the next book in the series, The Stone Dogs , and who - though biologically the children of a Draka father - would be staunch enemies of the Draka. 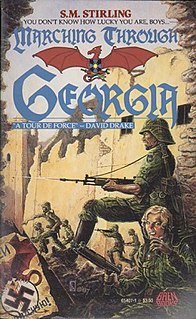 The Domination of the Draka is a dystopian alternate history series by American author S. M. Stirling.

Colonization is a trilogy of alternate history books by American writer Harry Turtledove. It is a series continuation of the situation set up in the Worldwar tetralogy, projecting the situation between humanity and The Race nearly twenty years afterward, in the mid-1960s.

The Two Georges is an alternate history and detective thriller novel co-written by science fiction author Harry Turtledove and Oscar-winning actor Richard Dreyfuss. It was originally published in 1995 by Hodder & Stoughton in the United Kingdom, and in 1996 by Tor Books in the United States, and was nominated for the 1995 Sidewise Award for Alternate History.

The Southern Victory series or Timeline-191 is a series of eleven alternate history novels by author Harry Turtledove, beginning with How Few Remain (1997) and published over a decade. The period addressed in the series begins during the Civil War and spans nine decades, up to the mid-1940s. In the series, the Confederate States defeats the United States of America in 1862, thereby making good its attempt at secession and becoming an independent nation. Subsequent books are built on imagining events based on this alternate timeline. 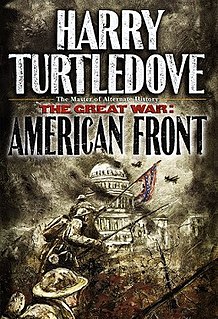 Marching Through Georgia is an alternate history novel by American writer S. M. Stirling, the first of four books in the series The Domination. The novel was released in the United States on May 1, 1988.

Settling Accounts: In at the Death is the last novel of the Settling Accounts tetralogy that presents an alternate history of World War II known as the Second Great War that was released July 27, 2007. It brings to a conclusion the multi-series compilation by author Harry Turtledove, a series sometimes referred to as Southern Victory. It covers the time period from 1943 to 1945.

1634: The Galileo Affair is the fourth book and third novel published in the 1632 series. It is co-written by American authors Eric Flint and Andrew Dennis and was published in 2004. It follows the activities of an embassy party sent from the United States of Europe (Grantville) to Venice, Italy, where the three young Stone brothers become involved with the local Committees of Correspondence and the Inquisition's trial of Galileo Galilei.

1635: The Cannon Law is the sixth book and fifth novel published in the 1632 series by Eric Flint and Andrew Dennis. It is the second novel in the French-Italian plot thread, which began with 1634: The Galileo Affair and was published by Baen Books in 2006. The book explores the reactions of the Roman Catholic hardliners to Pope Urban VIII's actions in tolerating the new freedom of religion taking root in Central Europe during the climax of The Galileo Affair.

Throne of Jade is the second novel in the Temeraire alternate history/fantasy series written by American author Naomi Novik. It was published by Del Rey first in the United States on April 25, 2006, and was published in the United Kingdom in August 2007 by Voyager.

Colonization: Aftershocks is an alternate history and science fiction novel by Harry Turtledove. It is the third and final novel of the Colonization series and the seventh installment in the extended Worldwar series. 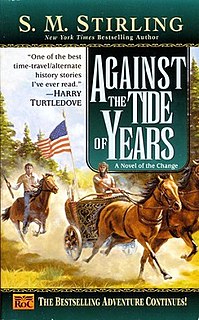 Against the Tide of Years is the second out of the three alternate history novels of the Nantucket series by S. M. Stirling. The novel was released in the United States, Canada, and the United Kingdom on May 1, 1999.

Drakon is a science fiction novel by Canadian-American writer S. M. Stirling, the fourth novel in the alternate history series The Domination. The novel was released in the United States on January 1, 1996.

The Stone Dogs is a science fiction novel by Canadian-American writer S. M. Stirling, the third book in the alternate history series, The Domination. It was first published in paperback by Baen Books in August, 1990. It was a preliminary nominee for the 1996 Prometheus Hall of Fame Award. 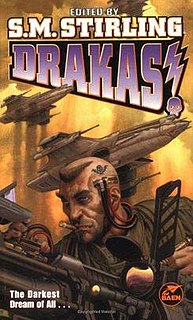 Drakas! is a science fiction anthology, containing stories set in S. M. Stirling's alternate history series The Domination. The anthology was released in the United States on October 31, 2000.

1635: The Eastern Front is an alternate history novel by Eric Flint in the 1632 series, first published in hardcover by Baen Books on October 5, 2010, with a paperback edition following from the same publisher in November 2011. It is a sequel to 1635: The Tangled Web and is directly continued by 1636: The Saxon Uprising.

Atlantis is an alternate history series written by Harry Turtledove. The point of divergence occurs around 85 million years ago when the eastern portion of the North American continent splits off from the rest of the continent and forms Atlantis, a separate continent farther east in the Atlantic Ocean.