Undercuts from etching (microfabrication) are a side effect, not an intentional feature. Undercuts from etching can occur from two common causes. The first is over etching, which means the etchant was applied too long. The second is due to an isotropic etchant, which means the etchant etches in all directions equally. To overcome this problem an anisotropic etchant is used. [1]

In metalworking and jewellery making, casting is a process in which a liquid metal is somehow delivered into a mold that contains a negative impression of the intended shape. The metal is poured into the mold through a hollow channel called a sprue. The metal and mold are then cooled, and the metal part is extracted. Casting is most often used for making complex shapes that would be difficult or uneconomical to make by other methods.

Isotropic etching is a method commonly used in semiconductors to remove material from a substrate via a chemical process using an etchant substance. The etchant may be in liquid-, gas- or plasma-phase, although liquid etchants such as buffered hydrofluoric acid (BHF) for silicon dioxide etching are more often used. Unlike anisotropic etching, isotropic etching does not etch in a single direction, but rather etches in multiple directions within the substrate. Any horizontal component of the etch direction may therefore result in undercutting of patterned areas, and significant changes to device characteristics. Isotropic etching may occur unavoidably, or it may be desirable for process reasons. 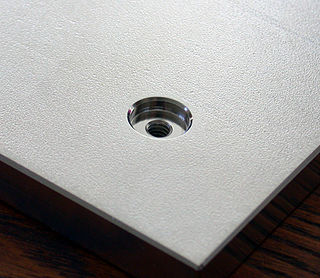 A counterbore is a cylindrical flat-bottomed hole that enlarges another coaxial hole, or the tool used to create that feature. A counterbore hole is typically used when a fastener, such as a socket head cap screw, is required to sit flush with or below the level of a workpiece's surface. 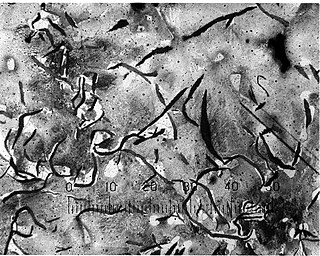 Surface finish, also known as surface texture or surface topography, is the nature of a surface as defined by the three characteristics of lay, surface roughness, and waviness. It comprises the small, local deviations of a surface from the perfectly flat ideal.

Etching is used in microfabrication to chemically remove layers from the surface of a wafer during manufacturing. Etching is a critically important process module, and every wafer undergoes many etching steps before it is complete.

A chill is an object used to promote solidification in a specific portion of a metal casting mold. Normally the metal in the mould cools at a certain rate relative to thickness of the casting. When the geometry of the molding cavity prevents directional solidification from occurring naturally, a chill can be strategically placed to help promote it. There are two types of chills: internal and external chills.

Permanent mold casting is a metal casting process that employs reusable molds, usually made from metal. The most common process uses gravity to fill the mold, however gas pressure or a vacuum are also used. A variation on the typical gravity casting process, called slush casting, produces hollow castings. Common casting metals are aluminium, magnesium, and copper alloys. Other materials include tin, zinc, and lead alloys and iron and steel are also cast in graphite molds.

Full-mold casting is an evaporative-pattern casting process which is a combination of sand casting and lost-foam casting. It uses an expanded polystyrene foam pattern which is then surrounded by sand, much like sand casting. The metal is then poured directly into the mold, which vaporizes the foam upon contact.

Photochemical machining (PCM), also known as photochemical milling or photo etching, is a chemical milling process used to fabricate sheet metal components using a photoresist and etchants to corrosively machine away selected areas. This process emerged in the 1960s as an offshoot of the printed circuit board industry. Photo etching can produce highly complex parts with very fine detail accurately and economically.

Free machining steel is steel that forms small chips when machined. This increases the machinability of the material by breaking the chips into small pieces, thus avoiding entanglement in the machinery. This enables automatic equipment to run without human interaction. Free machining steel with lead also allow for higher machining rates. Free machining steel costs 15 to 20% more than standard steel, but this higher cost is offset by increased machining speeds, larger cuts, and longer tool life.

A core is a device used in casting and moulding processes to produce internal cavities and reentrant angles. The core is normally a disposable item that is destroyed to get it out of the piece. They are most commonly used in sand casting, but are also used in die casting and injection moulding.

Surface integrity is the surface condition of a workpiece after being modified by a manufacturing process. The term was coined by Michael Field and John F. Kahles in 1964.