Unearthed is a 2007 American horror film directed by Matthew Leutwyler and starring Emmanuelle Vaugier and Luke Goss. It opened on November 9, 2007 as one of the "8 Films to Die For" in the After Dark Films Horrorfest.

After a sinister crash on the highway in a small New Mexican town, people start disappearing and animals begin dying. The cause of the crash is later revealed to be a 900-year-old creature which was unearthed during an archaeological dig in the area.

Meanwhile, a gas station owner informs a group of people that the gas tank never arrived, which meant that the small group needed to spend the night at the gas station. Sheriff Annie is called to investigate the crash, and finds a strange piece of evidence.

Annie then takes it to the gas station, where Nodin investigates it. It is clearly not human, and has many elements of DNA in it. It is later explained the creature is an alien weapon, devised by an extremely ancient civilization to collect DNA like some kind of probe or exploration device created using bio-technology, however it tends to do so in a decidedly lethal manner.

At the bar, Carla finds male customers dead in the back lot. She runs back into the bar, and the creature then breaks in. It first injures her arm (and also causes her to shoot herself in the foot), and then it eventually butchers her.

Back at the gas station, Caya and Charlie are flirting inside the motel room. Ally goes outside to throw out some garbage, and encounters Grandpa, thinking Ally was a coyote rustling through the trash. Ally then returns to the motel, but before she can enter, the creature rips its claw into her torso.

Ally's dead body is thrown back into the room and onto the stove. Her dead body burns, causing a fire, and a gas leak. Annie, Nodin, and Grandpa go into the room where the creature is outside banging on the walls. Grandpa is then killed, and Nodin begins to panic.

Annie then knocks her unconscious and they go out to the truck, after the room explodes into flames.

After battling the monster countlessly, most of the group is killed. At the end, Annie confronts the monster, and believes she kills it by smashing it against a water tank with her car but the monster was only made unconscious for a while. Annie injects herself with the poison containing uranium (the only substance that makes the poison work against the monster) that was prepared by Nodin in order to kill the monster. The monster kills Annie and dies itself as soon as it comes in contact with the uranium in the poison. The remaining survivors, Caya and Nodin, place Annie's body in the back of their truck. They then drive off, leaving the monster in the dirt, where it is most likely going to become buried again.

Joy Ride is a 2001 American horror thriller film directed by John Dahl and written by J. J. Abrams and Clay Tarver. Paul Walker stars as Lewis Thomas, a college freshman embarking on a cross-country road trip during summer break to pick up his childhood crush Venna. Along for the ride is Lewis' brother Fuller, a practical joker who uses the car's CB radio to play a cruel prank on a trucker known only by the handle Rusty Nail. The victim of Fuller's gag, a psychotic murderer, pursues them relentlessly to get revenge at any cost.

"Sacrifice" is episode 20 of season 4 in the television show Angel.

Komodo is a 1999 Australian-American monster horror thriller film directed by Michael Lantieri. On a holiday with his parents, fifteen-year-old Patrick witnesses them get attacked and killed. The shock prevents Patrick from remembering what happened, and he is assigned to young psychiatrist Victoria Juno for help. Patrick attempts to come to terms with his loss, but when he and his aunt Annie return to the scene, Patrick must face the creature responsible for their demise.

Aberration is a 1997 horror film directed by Tim Boxell. It was set in the United States and shot in New Zealand, and stars Pamela Gidley as a woman who moves to her old childhood cabin in the woods, only to discover that it is overrun by a pack of murderous lizards.

Vacancy is a 2007 American horror thriller film directed by Nimród Antal and starring Kate Beckinsale and Luke Wilson. It was released April 20, 2007, by the distributor Screen Gems. Early in the film's development, it was thought Sarah Jessica Parker would star; but, in September 2006, The Hollywood Reporter announced Kate Beckinsale had been signed instead. 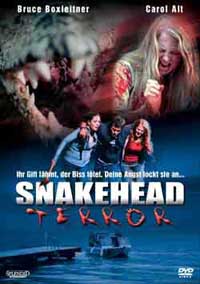 Snakehead Terror is a 2004 American made-for-television science fiction-horror film and is one of two Sci Fi Channel films based on the snakehead fish incident in a Crofton, Maryland, pond. The other film is Frankenfish. Swarm of the Snakehead is an independently produced creature comedy based on the same Crofton incident, and the only one of the three actually filmed in Maryland. All three films are based on real fish called snakeheads. 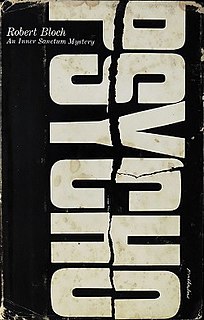 Psycho is a 1959 horror novel by American writer Robert Bloch. The novel tells the story of Norman Bates, caretaker at an isolated motel who struggles under his domineering mother and becomes embroiled in a series of murders. The novel is considered Bloch's most enduring work and one of the most influential horror books of the 20th Century.

The Nature of the Beast is a 1995 American direct-to-video mystery horror film written and directed by Victor Salva and starring Eric Roberts and Lance Henriksen.

Species: The Awakening is a 2007 science fiction action thriller film and the fourth and final installment of the Species film series. The film was directed by Nick Lyon and starring Ben Cross, Helena Mattsson, Dominic Keating and Marlene Favela. It is not a sequel to the first three films, instead as a stand-alone film and the first film of the Species series that does not feature Natasha Henstridge. The film premiered on the American broadcast, the Sci-Fi Channel on September 29, 2007 and was released on DVD on October 2.

Giant Phantom Monster Agon is a 1964 black-and-white Japanese Kaiju miniseries. Produced by Nippon Television, the miniseries aired on Fuji TV from January 2, 1968, to January 8, 1968. Internationally, the film is known as Agon: Atomic Dragon. The series was re-released in a condensed feature-length film in the mid-1990s by Toho.

"Left Behind" is the 15th episode of the 3rd season of Lost. It was aired on April 4, 2007, making it the 64th episode of the series. The episode was written by Damon Lindelof and Elizabeth Sarnoff and directed by Karen Gaviola. The character of Kate is featured in the episode's flashbacks.

Dolan's Cadillac is a 2009 Canadian crime film starring Wes Bentley, Christian Slater and Emmanuelle Vaugier. It is based on a novella of the same name by Stephen King.

It's Alive! is a 1969 American monster movie directed by Larry Buchanan and distributed by American International Pictures. The story concerns a mad farmer who tries to feed a stranded couple to a dinosaur he keeps in a cave.

Pumpkinhead is an American horror film series. The series mainly focuses on Pumpkinhead, a gigantic vengeance demon, that destroys whomever it is summoned to destroy. It was released at a time when slasher movies were beginning to become less commercially successful. The original film received mixed reviews and was not a commercial success, but it has gained a cult following. The first film was the only one to have a theatrical release; the sequels, which weren't as well-received as the original film, were released either direct to video or were made for television. Critics praised the design of Pumpkinhead and the effects of the original film. Pumpkinhead was the directorial debut of the late special effects wizard Stan Winston.

Dying Room Only is a 1973 American made-for-television horror mystery thriller film directed by Philip Leacock and starring Cloris Leachman and Ross Martin. Written by Richard Matheson and based on his 1953 short story of the same name, the film follows a woman whose husband disappears after they stop by a rural diner in the Arizona desert.

Looking Glass is a 2018 American thriller film directed by Tim Hunter and starring Nicolas Cage. It was released in the United States by Momentum Pictures on February 16, 2018.