Last updated May 04, 2021
American database of artists and people

The Union List of Artist Names (ULAN) is a free online database of the Getty Research Institute using a controlled vocabulary, which by 2018 contained over 300,000 artists and over 720,000 names for them, as well as other information about artists. [1] Names in ULAN may include given names, pseudonyms, variant spellings, names in multiple languages, and names that have changed over time (e.g., married names). Among these names, one is flagged as the preferred name.

Although it is displayed as a list, ULAN is structured as a thesaurus, compliant with ISO and NISO standards for thesaurus construction; it contains hierarchical, equivalence, and associative relationships.

The focus of each ULAN record is an artist. In the database, each artist record (also called a subject) is identified by a unique numeric ID. The artist's nationality is given, as are places and dates of birth and death (if known). [2] Linked to each artist record are names, related artists, sources for the data, and notes. The temporal coverage of the ULAN ranges from Antiquity to the present and the scope is global.

Artists may be either individuals (persons) or groups of individuals working together (corporate bodies). Artists in the ULAN generally represent creators involved in the conception or production of visual arts and architecture. Some performance artists are included (but typically not actors, dancers, or other performing artists). Repositories and some donors are included as well. [3]

Development of the ULAN began in 1984 by the J. Paul Getty Trust. The Trust, which already managed the Art and Architecture Thesaurus (AAT), began the project in response to requests from Getty projects for controlled vocabularies of artists' names. [4] The ULAN grows and changes via contributions from the user community and editorial work of the Getty Vocabulary Program. [4]

Although originally intended only for use by Getty projects, the broader art information community outside the Getty expressed a need to use ULAN for cataloging and retrieval. The Getty thus distributed ULAN for broader use according to the tenets previously established for the construction and maintenance of the Art and Architecture Thesaurus: Its scope includes names needed to catalog and retrieve information about the visual arts and architecture; it is based on terminology that is current, warranted for use by authoritative literary sources, and validated by use in the scholarly art and architectural history community; and it is compiled and edited in response to the needs of the user community. Originally constructed as a simple alphabetized "union list" of clustered artist names and biographies, in order to make it consistent with the AAT and Getty Thesaurus of Geographic Names, in the late 1990s ULAN was brought into compliance with national and international standards for thesaurus construction. Its scope was broadened to include corporate bodies such as architectural firms and repositories of art, which may have hierarchical levels.

The ULAN was founded under the management of Eleanor Fink (head of what was then called the Vocabulary Coordination Group, and later Director of the Art History Information Program, later called the Getty Information Institute). [5] The ULAN has been constructed over the years by numerous members of the user community and an army of dedicated editors, under the supervision of several managers. The ULAN was published in 1994 in hardcopy (Union List of Artist Names. Project manager, James M. Bower; senior editor, Murtha Baca. New York: G.K. Hall, 1994) and machine-readable files. [5] Given the growing size and frequency of changes and additions to the ULAN, by 1997 it had become evident that hard-copy publication was impractical. It is now published in automated formats only, in both a searchable online Web interface and in data files available for licensing. The data for ULAN is compiled and edited in an editorial system that was custom-built by Getty technical staff to meet the unique requirements of compiling data from many contributors, merging, moving, and publishing in various formats. Final editorial control of the ULAN is maintained by the Getty Vocabulary Program, using well-established editorial rules. The current managers of the ULAN are Patricia Harpring, Managing Editor, and Murtha Baca, Head, Vocabulary Program and Digital Resource Management.

Even though the structure is relatively flat, the ULAN is constructed as a hierarchical database; its trees branch from a root called Top of the ULAN hierarchies (Subject_ID: 500000001); it currently has two published facets: Person and Corporate Body. Entities in the Person facet typically have no children. Entities in the Corporate Body facet may branch into trees. There may be multiple broader contexts, making the ULAN structure polyhierarchical. In addition to the hierarchical relationships, the ULAN also has equivalent and associative relationships.

Ulan may refer to:

Artstor is a nonprofit organization that builds and distributes the Digital Library, an online resource of more than 2 million images in the arts, architecture, humanities, and sciences, and Shared Shelf, a Web-based cataloging and image management software service that allows institutions to catalog, edit, store, and share local collections.

Mather Brown was a portrait and historical painter, born in Boston, Massachusetts, but active in England.

The Getty Thesaurus of Geographic Names is a product of the J. Paul Getty Trust included in the Getty Vocabulary Program. The TGN includes names and associated information about places. Places in TGN include administrative political entities and physical features. Current and historical places are included. Other information related to history, population, culture, art and architecture is included.

IMS VDEX, which stands for IMS Vocabulary Definition Exchange, is a mark-up language – or grammar – for controlled vocabularies developed by IMS Global as an open specification, with the Final Specification being approved in February 2004.

AGROVOC is a multilingual controlled vocabulary covering all areas of interest to the Food and Agriculture Organization of the United Nations (FAO), including food, nutrition, agriculture, fisheries, forestry and the environment. The vocabulary consists of over 35,000 concepts with up to 671,000 terms in different languages. It is a collaborative effort, edited by a community of experts and coordinated by FAO.

The Getty Research Institute (GRI), located at the Getty Center in Los Angeles, California, is "dedicated to furthering knowledge and advancing understanding of the visual arts".

The Art & Architecture Thesaurus (AAT) is a controlled vocabulary used for describing items of art, architecture, and material culture. The AAT contains generic terms, such as "cathedral," but no proper names, such as "Cathedral of Notre Dame." The AAT is used by, among others, museums, art libraries, archives, catalogers, and researchers in art and art history. The AAT is a thesaurus in compliance with ISO and NISO standards including ISO 2788, ISO 25964 and ANSI/NISO Z39.19.

Categories for the Description of Works of Art (CDWA) describes the content of art databases by articulating a conceptual framework for describing and accessing information about works of art, architecture, other material culture, groups and collections of works, and related images. The CDWA includes 532 categories and subcategories. A small subset of categories are considered core in that they represent the minimum information necessary to identify and describe a work. The CDWA includes discussions, basic guidelines for cataloging, and examples. 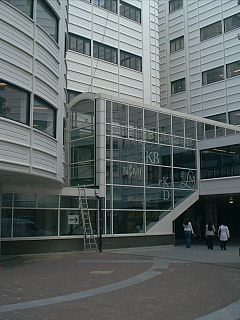 The Netherlands Institute for Art History or RKD, previously Rijksbureau voor Kunsthistorische Documentatie (RKD), is located in The Hague and is home to the largest art history center in the world. The center specializes in documentation, archives, and books on Western art from the late Middle Ages until modern times. All of this is open to the public, and much of it has been digitized and is available on their website. The main goal of the bureau is to collect, categorize, and make art research available, most notably in the field of Dutch Masters.

ISO 25964 is the international standard for thesauri, published in two parts as follows:

The Cultural Objects Name Authority (CONA) is a project by the Getty Research Institute to create a controlled vocabulary containing authority records for cultural works, including architecture and movable works such as paintings, sculpture, prints, drawings, manuscripts, photographs, textiles, ceramics, furniture, other visual media such as frescoes and architectural sculpture, performance art, archaeological artifacts, and various functional objects that are from the realm of material culture and of the type collected by museums. The focus of CONA is works cataloged in scholarly literature, museum collections, visual resources collections, archives, libraries, and indexing projects with a primary emphasis on art, architecture, or archaeology. The target users are the visual resources, academic, and museum communities.

The documentation of cultural property is a critical aspect of collections care. As stewards of cultural property, museums collect and preserve not only objects but the research and documentation connected to those objects, in order to more effectively care for them. Documenting cultural heritage is a collaborative effort. Essentially, registrars, collection managers, conservators, and curators all contribute to the task of recording and preserving information regarding collections. There are two main types of documentation museums are responsible for: records generated in the registration process—accessions, loans, inventories, etc. and information regarding research on objects and their historical significance. Properly maintaining both types of documentation is vital to preserving cultural heritage.

The Répertoire de vedettes-matière de l'Université Laval (RVM) is a controlled vocabulary made up of four mostly bilingual thesauruses. It is designed for document indexers, organizations that want to describe the content of their documents or of their products and services, as well as anyone who wants to clarify vocabulary in English and French as part of their work or research.