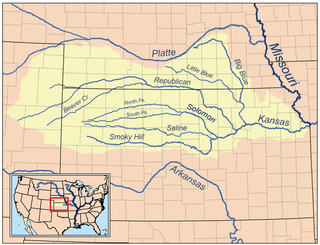 The Kansas River, also known as the Kaw, is a river in northeastern Kansas in the United States. It is the southwestern-most part of the Missouri River drainage, which is in turn the northwestern-most portion of the extensive Mississippi River drainage. Its two names both come from the Kanza (Kaw) people who once inhabited the area; Kansas was one of the anglicizations of the French transcription Cansez of the original kką:ze. The city of Kansas City, Missouri, was named for the river, as was later the state of Kansas. 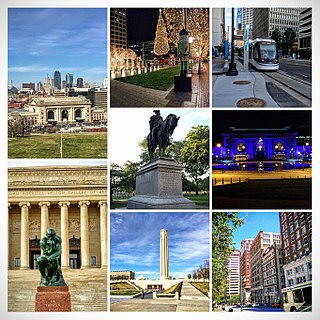 Kansas City is the largest city in the U.S. state of Missouri. According to the U.S. Census Bureau, the city had an estimated population of 488,943 in 2017, making it the 37th most-populous city in the United States. It is the central city of the Kansas City metropolitan area, which straddles the Kansas–Missouri state line. Kansas City was founded in the 1830s as a Missouri River port at its confluence with the Kansas River coming in from the west. On June 1, 1850 the town of Kansas was incorporated; shortly after came the establishment of the Kansas Territory. Confusion between the two ensued and the name Kansas City was assigned to distinguish them soon after.

It is the sister bridge to the Missouri Pacific Bridge

The BNSF Railway Company is the largest freight railroad network in North America. One of eight North American Class I railroads, BNSF has 44,000 employees, 32,500 miles (52,300 km) of track in 28 states, and more than 8,000 locomotives. It has three transcontinental routes that provide rail connections between the western and eastern United States. BNSF trains traveled over 169 million miles in 2010, more than any other North American railroad. The BNSF and Union Pacific have a duopoly on all transcontinental freight rail lines in the Western U.S. and share trackage rights over thousands of miles of track.

The Katy Trail State Park is a state park in the U.S. state of Missouri that contains the Katy Trail, a recreational rail trail that runs 240 miles (390 km) in the right-of-way of the former Missouri–Kansas–Texas Railroad. Running largely along the northern bank of the Missouri River, it is the country's longest Rails-to-Trails trail. The trail is open for use by hikers, joggers, and cyclists year-round, from sunrise to sunset. Its hard, flat surface is of "limestone pug".

The Missouri–Kansas–Texas Railway is a former Class I railroad company in the United States, with its last headquarters in Dallas. Established in 1865 under the name Union Pacific Railway, Southern Branch, it came to serve an extensive rail network in Texas, Oklahoma, Kansas, and Missouri. In 1989, it merged with the Missouri Pacific Railroad; today, it is part of Union Pacific Railroad.

The Arkansas and Missouri Railroad is a Class III short-line railroad headquartered in Springdale, Arkansas.

The Missouri and Northern Arkansas Railroad is a Class III short-line railroad headquartered in Carthage, Missouri.

The Kansas City Terminal Railway is a Class III terminal railroad that serves as a joint operation of the trunk railroads that serve the Kansas City metropolitan area, the United States' second largest rail hub. It is operated by the Kaw River Railroad.

The Harry S Truman Bridge is a vertical lift rail drawbridge over the Missouri River connecting Jackson County, Missouri with Clay County, Missouri in Kansas City, Missouri. It has a 427 foot main span, and is the tenth longest span in the United States.

The Missouri–Kansas–Texas Bridge is a former rail bridge across the Missouri River at Boonville, Missouri, where it connects Howard and Cooper counties. In 2010, the bridge was acquired by the city of Boonville from the Union Pacific Railroad. The city plans to incorporate it into the 225-mile Katy Trail bicycle trail.

Railroads in Omaha, Nebraska have been integral to the growth and development of the city, the state of Nebraska, the Western United States and the entire United States. The convergence of many railroad forces upon the city was by happenstance and synergy, as none of the Omaha leaders had a comprehensive strategy for bringing railroads to the city.

The Pencoyd Railroad Bridge is a former railroad bridge in Kansas City, Missouri, that was converted into the Freight House Pedestrian Bridge and moved to its new location where it connects Union Station and the Crossroads Arts District. 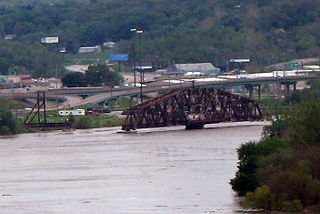 The Central Midland Railway, a division of Progressive Rail Incorporated of Lakeville, Minnesota, is a short line railroad in the U.S. state of Missouri, operating under lease of the former St. Louis Subdivision of the Chicago, Rock Island and Pacific Railroad. CMR operates the eastern-most 60 miles of the 298-mile Rock Island line which used to stretch from St. Louis to Kansas City, Missouri. Today, CMR's operation of the line is performed under two separate leases from the Union Pacific Railroad and the Ameren Corporation, respectively, from Overland, Missouri - a suburb of St. Louis, to a location just west of Union, Missouri. CMR's first leased-segment is Union Pacific's "Lackland Subdivision" which extends from "Rock Island Junction" near the intersection of Page Avenue and I-170 in Overland to a location on the north-side of Creve Coeur Lake in Maryland Heights, Missouri, known as "Vigus." The second leased-segment is owned by A&K Railroad Materials and extends from Vigus to Beaufort, Missouri, with active service terminating at Union.