The United Cut Nail Makers of Great Britain Protection Society was a trade union in the United Kingdom. It merged with the Transport and General Workers' Union in 1952. [1]

A trade union, also called a labour union or labor union (US), is an association of workers in a particular trade, industry, or company created for the purpose of securing improvement in pay, benefits, working conditions or social and political status through collective bargaining and working conditions through the increased bargaining power wielded by creation of a monopoly of the workers. The trade union, through its leadership, bargains with the employer on behalf of union members and negotiates labour contracts with employers. The most common purpose of these associations or unions is "maintaining or improving the conditions of their employment". This may include the negotiation of wages, work rules, complaint procedures, rules governing hiring, firing and promotion of workers, benefits, workplace safety and policies.

The World Federation of Trade Unions (WFTU) was established in 1945 to replace the International Federation of Trade Unions. Its mission was to bring together trade unions across the world in a single international organization, much like the United Nations. After a number of Western trade unions left it in 1949, as a result of disputes over support for the Marshall Plan, to form the International Confederation of Free Trade Unions, the WFTU was made up primarily of unions affiliated with or sympathetic to communist parties. In the context of the Cold War, the WFTU was often portrayed as a Soviet front organization. A number of those unions, including those from Yugoslavia and China, left later when their governments had ideological differences with the Soviet Union.

Freedom of association encompasses both an individual's right to join or leave groups voluntarily, the right of the group to take collective action to pursue the interests of its members, and the right of an association to accept or decline membership based on certain criteria. Freedom of Association, The Essentials of Human Rights describes the right as coming together with other individuals to collectively express, promote, pursue and/or defend common interests. Freedom of Association is both an individual right and a collective right, guaranteed by all modern and democratic legal systems, including the United States Bill of Rights, article 11 of the European Convention on Human Rights, the Canadian Charter of Rights and Freedoms, and international law, including articles 20 and 23 of the Universal Declaration of Human Rights. The Declaration on Fundamental Principles and Rights at Work by the International Labour Organization also ensures these rights.

A national trade union center is a federation or confederation of trade unions in a single country. Nearly every country in the world has a national trade union center, and many have more than one. When there is more than one national center, it is often because of ideological differences—in some cases long-standing historic differences. In some regions, such as the Nordic countries, different centers exist on a sectoral basis, for example for blue collar workers and professionals. 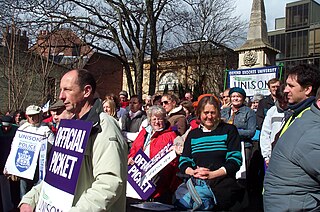 Trade unions in the United Kingdom were first decriminalised under the recommendation of a Royal Commission in 1867, which agreed that the establishment of the organisations was to the advantage of both employers and employees. Legalised in 1871, the Trade Union Movement sought to reform socio-economic conditions for working men in British industries, and the trade unions' search for this led to the creation of a Labour Representation Committee which effectively formed the basis for today's Labour Party, which still has extensive links with the Trade Union Movement in Britain. Margaret Thatcher's governments weakened the powers of the unions in the 1980s, in particular by making it more difficult to strike legally, and some within the British trades union movement criticised Tony Blair's Labour government for not reversing some of Thatcher's changes. Most British unions are members of the TUC, the Trades Union Congress, or where appropriate, the Scottish Trades Union Congress or the Irish Congress of Trade Unions, which are the country's principal national trade union centres.

The International Centre for Trade Union Rights (ICTUR) is "an organizing and campaigning body with the fundamental purpose of defending and improving the rights of trade unions and trade unionists throughout the world." ICTUR has accredited status with both the United Nations and the International Labour Organization. 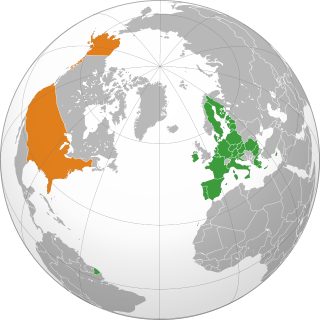 Relations between the United States of America (USA) and the European Union (EU) are the bilateral relations between that country and the supranational organization. The USA and EU have been interacting for more than sixty years. USA-EU relations officially started in 1953 when USA ambassadors visited the European Coal and Steel Community. The two parties share a good relationship which is strengthened by cooperation on trade, military defense and shared values.

Trade unions in Albania have had an unstable existence in recent decades, mirroring the regional political turbulance in Albania. Since the 1991 defeat of the Albanian Party of Labour (APL), independent trade unions have asserted themselves, with two main national trade union centres; the United Independent Albanian Trade Unions (BSPSh) and the Confederation of Trade Unions (KSSh).

The European Union Customs Union (EUCU) is a customs union which consists of all the member states of the European Union (EU), Monaco, and some dependencies of the United Kingdom which are not part of the EU. Some detached territories of EU members do not participate in the customs union, usually as a result of their geographic separation. In addition to the EUCU, the EU is in customs unions with Andorra, San Marino, and Turkey, through separate bilateral agreements.

The European Union has concluded free trade agreements (FTAs) and other agreements with a trade component with many countries worldwide and is negotiating with many others.

Brexit is the withdrawal of the United Kingdom (UK) from the European Union (EU). Following a referendum held on 23 June 2016 in which 51.9 per cent of those voting supported leaving the EU, the invocation of Article 50 of the Treaty on European Union started a two-year process which was due to conclude with the UK's exit on 29 March 2019, a deadline which was later extended to 12 April 2019.