United Families International (UFI) is a United States nonprofit organization founded in 1978 by Susan Roylance. [1] [2] UFI works on an international scale to influence public policy toward "maintaining and strengthening the family". UFI has NGO status with ECOSOC and works to spread their opinion to United Nations (UN) ambassadors and delegates on family related issues. [5] UFI also operates a website, DefendMarriage.org. [6] They are listed by the Southern Poverty Law Center (SPLC) as an anti-gay hate group. [7] [8] [9] but are supported by and in agreement with significant portions of the Christian conservative coalition. [10] [11]

United Families International was founded in 1978 by Susan Roylance [1] [2] of Washington state and Jan Clark of South Carolina. [12] The group actively promotes what it believes are "traditional family values" internationally, nationally and locally.

UFI under Roylance was actively involved in promoting "traditional family values" at the Beijing Conference in the mid 1990s. Roylance characterized the conference as a "wakeup call for those who believe the traditional family unit to be an important basic unit of society". [10]

The organization received ECOSOC accreditation [11] :xxxi and participated in the World Congress of Families II Conference in Switzerland in 1999. [11] :82 UFI has brought its platform to international organizations, including the UN in 2002, at which it joined more than 300 activists in urging diplomats to "reaffirm marriage and promote sexual abstinence among teen-agers." Sharon Slater, UFI's president at the time asked UN diplomats "to ensure that religions are respected and protected in U.N. documents, insofar as they respect the family and the dignity of the human person". [13]

UFI, considered by some to be part of the Christian right and a Mormon organization, [10] [11] is connected with several politicians in Arizona. Arizona Republican state Representative Andy Biggs is the former policy advisor to UFI and his wife Cindy is the secretary and treasurer of the organization. Republican state Representative Cecil Ash and his wife are also affiliated with the organization. [9] [14]

In 2006, UFI contributed $50,000 in support of Arizona Proposition 107, the Protect Marriage Arizona initiative, a proposed same-sex marriage ban that was ultimately defeated. [15]

In their Guide to Family Issues UFI makes a number of claims about homosexuality, including [16]

Family Research Council (FRC) is an American fundamentalist Protestant activist group, with an affiliated lobbying organization. FRC promotes what it considers to be family values by advocating and lobbying for policies in government.

The American Family Association (AFA) is a Christian fundamentalist 501(c)(3) organization based in the United States. It opposes LGBT rights and expression, pornography, and abortion. It also takes a position on a variety of other public policy goals. It was founded in 1977 by Donald Wildmon as the National Federation for Decency and is headquartered in Tupelo, Mississippi.

The Traditional Values Coalition (TVC) was an American conservative Christian organization. It was founded in Orange County, California by Rev. Louis P. Sheldon to oppose LGBT rights. Sheldon's daughter, Andrea Sheldon Lafferty, was the executive director. TVC was influential in the 1980s and 1990s in lobbying for government policy based in Christian fundamentalism.

The Family Research Institute (FRI), originally known as the Institute for the Scientific Investigation of Sexuality (ISIS), is an American socially conservative non-profit organization based in Colorado Springs, Colorado which states that it has "...one overriding mission: to generate empirical research on issues that threaten the traditional family, particularly homosexuality, AIDS, sexual social policy, and drug abuse". The FRI is part of a sociopolitical movement of socially conservative Christian organizations which seek to influence the political debate in the United States. They seek "...to restore a world where marriage is upheld and honored, where children are nurtured and protected, and where homosexuality is not taught and accepted, but instead is discouraged and rejected at every level." The Boston Globe reported that the FRI's 2005 budget was less than $200,000. 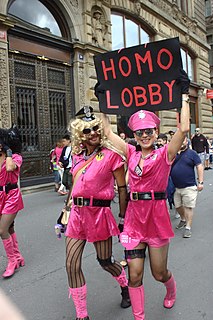 "Gay agenda" is a term introduced by sectors of the Christian religious right as a disparaging way to describe the advocacy of cultural acceptance and normalization of non-heterosexual orientations and relationships. The term originated among social conservatives in the United States and has been adopted in other nations with active anti-LGBT movements such as Hungary and Uganda.

Mission: America is an American Christian right organization based in Columbus, Ohio and founded in 1995 that seeks to "cover the latest cultural and social trends in our country and what they might mean for Christians." The organization publishes articles on its web site about its views on homosexuality and paganism. Mission: America's founder and president, Linda Harvey, is an outspoken critic of LGBT rights, including same-sex marriage.

The World Congress of Families (WCF) is a United States coalition that promotes Christian right values internationally. It opposes same-sex marriage, pornography, and abortion, while supporting a society built on "the voluntary union of a man and a woman in a lifelong covenant of marriage". WCF comprises organizations in several countries, and most of its member partners are strongly active campaigners against abortion rights and same-sex marriage. WCF was formed in 1997 and is active worldwide, regularly organizing conventions. Its opposition to gay marriage and abortion has attracted criticism. It was added to the list of organizations designated by the Southern Poverty Law Center as anti-LGBT hate groups in February 2014 for its involvement with the 2013 Russian LGBT propaganda law and opposing LGBT rights internationally.

MassResistance is a hate group which promotes anti-LGBT and socially conservative positions. The group is designated an anti- LGBT hate group by the Southern Poverty Law Center, in part for claims linking LGBT people with pedophilia and zoophilia, and claims that suicide prevention programs aimed at gay youth were created by homosexual activists to normalize and "lure" children into homosexuality.

Scott Douglas Lively is an American activist, author, and attorney, who is the president of Abiding Truth Ministries, an anti-LGBT group based in Temecula, California. He was also a cofounder of Latvia-based group Watchmen on the Walls, state director of the California branch of the American Family Association, and a spokesman for the Oregon Citizens Alliance. He unsuccessfully attempted to be elected as the governor of Massachusetts in both 2014 and 2018.

The Center for Family and Human Rights (C-Fam) is a right-wing United States-based advocacy group, founded in 1997, in order to affect policy debate at the United Nations and other international institutions. It was formerly known as the Catholic Family and Human Rights Institute. The 501(c)(3) organization is anti-abortion and anti-LGBT.

Abiding Truth Ministries (ATM) is a United States nonprofit 501(c)(3) organization founded by Scott Lively in Temecula, California in 1997. The ministry has been based in Springfield, Massachusetts since 2008. Lively, an American author, attorney and activist, is noted for his opposition to LGBT rights and his involvement in the ex-gay movement. Lively has called for the criminalization of "the public advocacy of homosexuality" as far back as 2007. Along with Kevin E. Abrams, he co-authored the book The Pink Swastika, which states in the preface that "homosexuals [are] the true inventors of Nazism and the guiding force behind many Nazi atrocities." He is also directly linked to pending anti-gay legislation in Uganda, which would, if passed, make homosexual conduct punishable by a lengthy prison sentence or death. The Southern Poverty Law Center regards Abiding Truth Ministries as a hate group.

Bryan Jonathan Fischer is the former Director of Issues Analysis for the American Family Association (AFA). He hosts the talk radio program Focal Point on American Family Radio and posts on the AFA-run blog Instant Analysis. 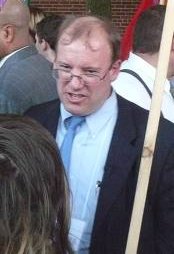 Peter LaBarbera is an American social conservative activist and the president of the anti-gay organization Americans for Truth about Homosexuality (AFTAH).

Americans for Truth about Homosexuality (AFTAH) is an organization which describes its mission as "exposing the homosexual activist agenda". AFTAH rejects the idea that sexual orientation is innate and believes that people can "leave the homosexual lifestyle". AFTAH contends that there is a fundamental conflict between gay rights and religious freedom. The Southern Poverty Law Center (SPLC) designated it as an anti-LGBT hate group.

Public Advocate of the United States is an organization founded in either 1978 or 1981 (disputed) by Eugene Delgaudio. It advocates religious conservative policies in American politics. The Southern Poverty Law Center has designated the organization as a hate group for its anti-gay activism.

Heterosexuals Organized for a Moral Environment (HOME) is an American pro-heterosexuality, anti-homosexuality organization founded by Wayne Lela and based in Downers Grove, Illinois. The organization's aim is "to use science, logic, and natural law to expose all the flaws in the arguments homosexuals use to try to justify homosexual activity". The organization has been designated an anti-gay hate group by the Southern Poverty Law Center "based on their propagation of known falsehoods".

SaveCalifornia.com is a United States nonprofit organization founded in 1999 by Randy Thomasson as part of Campaign for Children and Families (CCF). The organization is active in influencing public policy on various social issues, and has opposed California's FAIR Education Act. They are listed as an anti-gay hate group by the Southern Poverty Law Center, in part for depicting LGBT people as predatory.

Family Watch International (FWI) is a fundamentalist Christian lobbying organization. Founded in 1999, the organization opposes homosexuality, legal abortion, birth control, comprehensive sex education, and other things that it regards as threats to the divinely ordained "natural family." It has a strong presence in Africa, where it promotes conservative policy and attitudes about sexuality through its United Nations (UN) consultative status.