The Unity oil field is a major oil field in the Ruweng Administrative Area, South Sudan. It lies to the north of the state capital Bentiu in Rubkona County.

The oil field, and the Heglig field further north, were discovered by Chevron Corporation in 1982, and was to become one of the most productive fields in Sudan. Chevron spent almost $880 million in exploration, but suspended operations soon after the Second Sudanese Civil War (1983-2005) began. The trigger was the killing in 1984 of three Chevron workers by Anyanya II rebels. Chevron demanded a special oilfield protection force in addition to the army. Dissatisfied with security, by 1988 Chevron had closed its operations in Unity province. [1]

Chevron Corporation is an American multinational energy corporation. One of the successor companies of Standard Oil, it is headquartered in San Ramon, California, and active in more than 180 countries. Chevron is engaged in every aspect of the oil, natural gas, including hydrocarbon exploration and production; refining, marketing and transport; chemicals manufacturing and sales; and power generation. Chevron is one of the world's largest companies; as of March 2020, it ranked fifteenth in the Fortune 500 with a yearly revenue of $146.5 billion and market valuation of $136 billion. In the 2020 Forbes Global 2000, Chevron was ranked as the 61st -largest public company in the world. It was also one of the Seven Sisters that dominated the global petroleum industry from the mid-1940s to the 1970s. Chevron is incorporated in California. 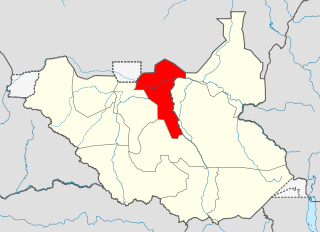 Unity State, also known as Western Upper Nile, is a state in South Sudan. Unity state is in the Greater Upper Nile region. Unity is inhabited predominantly by two ethnic groups: the Nuer majority, and the Dinka minority.

The Nuer people are a Nilotic ethnic group concentrated in the Greater Upper Nile region of South Sudan. They also live in the Ethiopian region Gambella. The Nuer speak the Nuer language, which belongs to the Nilotic language family. They are the second largest ethnic group in South Sudan. The Nuer people are pastoralists who herd cattle for a living. Their cattle serve as companions and define their lifestyle. The Nuer call themselves "Naath".

Bentiu, also spelled Bantiu, is a city in South Sudan and capital of the state of Unity State.

The Greater Nile Oil Pipeline is an important oil export pipeline in Sudan. It extends for approximately 1,600 kilometres (990 mi) of which approximately 1.8 kilometres is submarine. It was constructed by the Greater Nile Petroleum Operating Company (GNPOC) and commenced operation in 1999. It is operated by the China National Petroleum Corporation (CNPC) which is a 40% stakeholder in GNPOC. 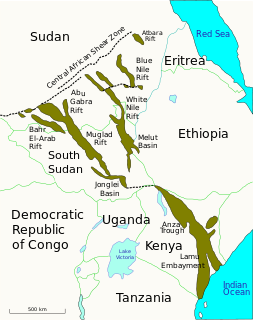 The Muglad Basin is a large rift basin in Northern Africa. The basin is situated within southern Sudan and South Sudan, and it covers an area of approximately 120,000 square kilometres (46,000 sq mi) across the two nations. It contains a number of hydrocarbon accumulations of various sizes, the largest of which are the Heglig and Unity oil fields. During the 1960s and 1970s, Chevron made the first oil discoveries in the basin near the towns of Bentiu, Malakal, and Muglad. Taken together, the Muglad and Melut rift basins account for the majority of Sudan's known oil reserves.

The San Ardo Oil Field is a large oil field in Monterey County, California, in the United States. It is in the Salinas Valley, about five miles (8 km) south of the small town of San Ardo, and about 20 miles (32 km) north of Paso Robles. With an estimated ultimate recovery of 532,496,000 barrels (84,660,100 m3) of oil, it is the eighth-largest producing oil field in California, and of the top 20 California oil fields in size, it is the most recent to be discovered (1947). As of the end of 2006, the principal operators of the field were Chevron Corp. and Aera Energy LLC.

China–Sudan relations refer to the bilateral relations between the People's Republic of China and the Republic of Sudan. China is currently one of Sudan's largest trade partners, importing oil and exporting low cost manufactured items as well as armaments into the country. Both states enjoy a very robust and productive relationship in the fields of diplomacy, economic trade, and political strategy. They formally established diplomatic relations on January 4, 1959 when Sudan formally recognized the sovereignty of the People's Republic of China and have since become close global allies, supporting each other in times of internal crises and international controversy such as during the Second Sudanese Civil War, the Darfur Crisis, and the Xinjiang Conflict. China continues to provide massive support to Sudan by developing its oil resources and supplying millions of dollars in loans, aid, foreign direct investments, and humanitarian assistance. In return, Sudan has become a reliable political and economic ally in the international arena, allowing China to maintain a significant stake in its oil sector. 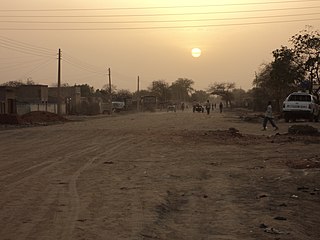 Mujlad is a city in West Kurdufan State in the west of Sudan. It is the center town of the Misseriya tribe, sometimes also transliterated as "Messeria" tribe.

The Bahr el Arab rift is a major geological feature in the southwest Sudan. 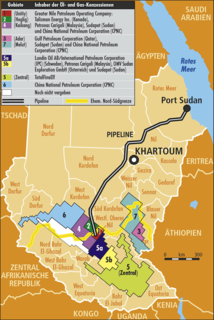 The Adar oilfield, also known as the Adar Yale, Adar Yeil or Adaril field, is an oilfield situated in the Mabaan in South Sudan estimated to contain about 276 million barrels (43,900,000 m3) of oil. The Chevron Corporation discovered the Adar Yale field in 1981, shortly before the start of the Second Sudanese Civil War (1983–2005). Soon after Chevron had suspended operations in 1984, Sudanese government troops began attacking civilian settlements in the area, burning the houses and driving the people away, and in the late 1990s, Nuer militias from Nasir helped the army in clearing away the people to make way for the roads and infrastructure of the oilfield.

Block 5A is an oil concession in South Sudan. After oil field development began during the Second Sudanese Civil War, Block 5A was the scene of extensive fighting as rival militias struggled for control. Out of an original population of 240,000, an estimated 12,000 were killed or died of starvation and 160,000 were displaced by force. Production started in 2006. There is evidence that the environmentally sensitive marshlands beside the Nile are becoming polluted. European companies have been accused of complicity in clearance of the population from the oil field.

Angelina Jany Teny is a South Sudanese politician who was state minister of Energy and Mining in the Khartoum-based Government of National Unity between 2005 and 2010. She ran for election as governor of Unity State in April 2010 but was defeated in an election that she claimed was rigged. She was appointed as Minister of Defence of South Sudan in March 2020. 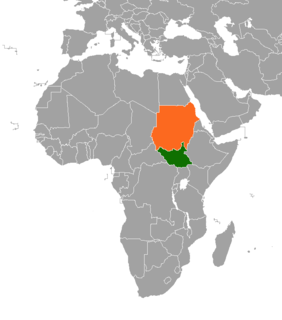 The Heglig Crisis was a brief war fought between the countries of Sudan and South Sudan in 2012 over oil-rich regions between South Sudan's Unity and Sudan's South Kordofan states. South Sudan invaded and briefly occupied the small border town of Heglig before being pushed back by the Sudanese army. Small-scale clashes continued until an agreement on borders and natural resources was signed on 26 September, resolving most aspects of the conflict.

The petroleum industry in Sudan began in earnest in 1979, when the first commercial flow in the country occurred. 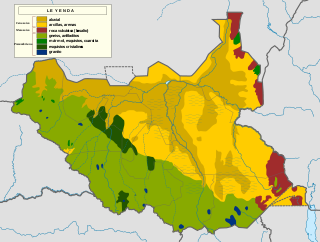 The geology of South Sudan is founded on Precambrian igneous and metamorphic rocks, that cover 40 percent of the country's surface and underlie other rock units. The region was affected by the Pan-African orogeny in the Neoproterozoic and extensional tectonics in the Mesozoic that deposited very thick oil-bearing sedimentary sequences in rift basins. Younger basalts, sandstones and sediments formed in the last 66 million years of the Cenozoic. The discovery of oil in 1975 was a major factor in the Second Sudanese Civil War, leading up to independence in 2011. The country also has gold, copper, cobalt, zinc, iron, marble, limestone and dolomite.