Last updated September 05, 2021
Not to be confused with Universal Express Pass.

Universal Express (abbreviated USXP [1] ) claimed to be a transportation and logistics service company and was registered in Nevada and headquartered in Boca Raton, Florida. [2] However, investigation by the SEC clearly revealed that the primary business of USXP was the production of and distribution of billions of illegal, unregistered shares. The money from these sales went directly to support the lavish lifestyle of Richard Altomare and his supporters. Some funds were diverted to advertising designed to push the sale of additional shares.

CEO Richard A. Altomare took control of the defunct Packaging Plus Services in 1988, and immediately began issuing billions of illegal and unregistered shares of stock, before the company collapsed in 2007. In later years, the company became known for accusations of naked short selling and questionable S.E.C. filings. [3] [4] A receiver was appointed for Universal Express by a federal judge at the request of the S.E.C. [5] The judge ordered Universal and its top officers to pay $21.9 million and barred them from future penny stock sales. [6]

Altomare was ordered to prison for contempt of court in April 2008. [7] In May, 2008, [8] he was incarcerated in the Metropolitan Correctional Center, New York City. [9] Altomare has been barred from being an executive of any public company. A federal court judge, in finding that the company and its top officers had violated securities laws, called Altomare and Universal Express' general counsel, Chris Gunderson, "repeated and remorseless violators" of the securities laws. [10]

The company's UniversalPost network claimed to provide support infrastructure for private Postal Service Centers. Independent contacts with the claimed partner postal center revealed they were not aware of any relationship with USXP. Its Luggage Express service allowed travelers to have their luggage collected and delivered separately from their personal travel arrangements. Michael Xirinachs was charged with engaging in unregistered distribution and sale of over 21 billion shares of Universal Express. He too received an injunction, disgorgement, civil penalties, and a penny stock bar.

MCI, Inc. was a telecommunications company. For a time, it was the second largest long-distance telephone company in the United States, after AT&T. Worldcom grew largely by acquiring other telecommunications companies, including MCI Communications in 1998, and filed bankruptcy in 2002 after an accounting scandal, in which several executives, including CEO Bernard Ebbers, were convicted of a scheme to inflate the company's assets. In January 2006, the company, by then renamed MCI, was acquired by Verizon Communications and was later integrated into Verizon Business.

The Sarbanes–Oxley Act of 2002 is a United States federal law that mandates certain practices in financial record keeping and reporting for corporations.

"Pump and dump" (P&D) is a form of securities fraud that involves artificially inflating the price of an owned stock through false and misleading positive statements, in order to sell the cheaply purchased stock at a higher price. Once the operators of the scheme "dump" (sell) their overvalued shares, the price falls and investors lose their money. This is most common with small cap cryptocurrencies and very small corporations/companies, i.e. "microcaps". 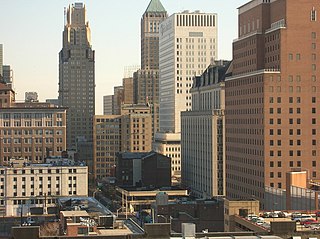 Prudential Financial, Inc. is an American Fortune Global 500 and Fortune 500 company whose subsidiaries provide insurance, investment management, and other financial products and services to both retail and institutional customers throughout the United States and in over 40 other countries.

A private investment in public equity, often called a PIPE deal, involves the selling of publicly traded common shares or some form of preferred stock or convertible security to private investors. It is an allocation of shares in a public company not through a public offering in a stock exchange. PIPE deals are part of the primary market. In the U.S., a PIPE offering may be registered with the Securities and Exchange Commission on a registration statement or may be completed as an unregistered private placement.

Invesco Ltd. is an American independent investment management company that is headquartered in Atlanta, Georgia, United States, and has branch offices in 20 countries. Its common stock is a constituent of the S&P 500 and trades on the New York stock exchange. Invesco operates under the Invesco, Trimark, Invesco Perpetual, WL Ross & Co and Powershares brand names.

Mercury was an Israeli company that has been acquired by the HP Software Division. Mercury offered software for application management, application delivery, change and configuration management, service-oriented architecture, change request, quality assurance, and IT governance. 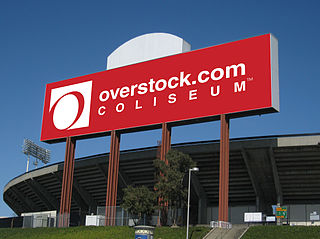 Overstock.com, Inc. is an American internet retailer selling primarily furniture headquartered in Midvale, Utah, near Salt Lake City. Patrick M. Byrne founded Overstock.com in 1999. The company initially sold exclusively surplus and returned merchandise on an online e-commerce marketplace, liquidating the inventories of at least 18 failed dot-com companies at below-wholesale prices. The company continues to sell home decor, furniture, bedding, and many other goods that are closeout merchandise; however, it also sells new merchandise.

Royal Group Technologies is a large Canadian building supplies maker and plastics company. Based in Woodbridge, Ontario it also has operations in much of Latin America and in Poland and China. In the 2000s it was plagued by scandals and financial losses.

Securities fraud, also known as stock fraud and investment fraud, is a deceptive practice in the stock or commodities markets that induces investors to make purchase or sale decisions on the basis of false information, frequently resulting in losses, in violation of securities laws. 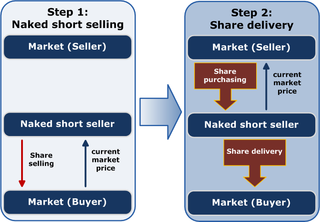 Naked short selling, or naked shorting, is the practice of short-selling a tradable asset of any kind without first borrowing the asset from someone else or ensuring that it can be borrowed. When the seller does not obtain the asset and deliver it to the buyer within the required time frame, the result is known as a "failure to deliver" (FTD). The transaction generally remains open until the asset is acquired and delivered by the seller, or the seller's broker settles the trade on their behalf.

A U.S. Securities and Exchange Commission and U.S. Attorney probe of trading in the shares of ImClone Systems resulted in a widely publicized criminal case, which resulted in prison terms for businesswoman and television personality Martha Stewart, ImClone CEO Samuel D. Waksal and Stewart's broker at Merrill Lynch, Peter Bacanovic. 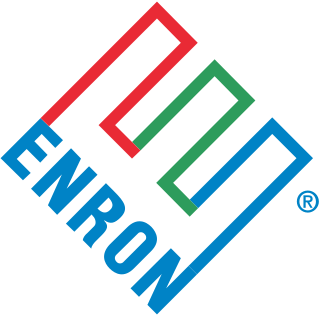 The Enron scandal was an accounting scandal involving Enron Corporation, an American energy company based in Houston, Texas. Upon being publicized in October 2001, the company declared bankruptcy and its accounting firm, Arthur Andersen – then one of the five largest audit and accountancy partnerships in the world – was effectively dissolved. In addition to being the largest bankruptcy reorganization in U.S. history at that time, Enron was cited as the biggest audit failure.​

Microcap stock fraud is a form of securities fraud involving stocks of "microcap" companies, generally defined in the United States as those with a market capitalization of under $250 million. Its prevalence has been estimated to run into the billions of dollars a year. Many microcap stocks are penny stocks, which the SEC defines as a security that trades at less than $5 per share, is not listed on a national exchange, and fails to meet other specific criteria. 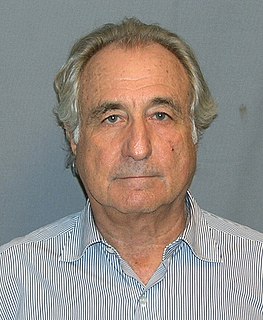 The Madoff investment scandal was a major case of stock and securities fraud discovered in late 2008. In December of that year, Bernie Madoff, the former NASDAQ chairman and founder of the Wall Street firm Bernard L. Madoff Investment Securities LLC, admitted that the wealth management arm of his business was an elaborate multi-billion-dollar Ponzi scheme.

Accounting scandals are business scandals which arise from intentional manipulation of financial statements with the disclosure of financial misdeeds by trusted executives of corporations or governments. Such misdeeds typically involve complex methods for misusing or misdirecting funds, overstating revenues, understating expenses, overstating the value of corporate assets, or underreporting the existence of liabilities. It involves an employee, account, or corporation itself and is misleading to investors and shareholders.

Luggage Express is a door-to-door luggage delivery service that was launched by parent company, Universal Express. Luggage Express arranged to pick up travelers' baggage at their home or office prior to a trip and have it waiting at the hotel or resort in the destination city.

Daniel Mark Porush is an American businessman and former stock broker who ran a "pump and dump" stock fraud scheme in the 1990s. In 1999, he was convicted of securities fraud and money laundering at the Stratton Oakmont brokerage, for which he served 39 months in prison. The character of Donnie Azoff, portrayed by Jonah Hill in the 2013 film The Wolf of Wall Street, was loosely based on Porush, although Porush described the portrayal as inaccurate. After prison, Porush became involved with a Florida-based medical supply company, Med-Care, which was the subject of federal investigations.

Benjamin Wey is a Chinese-born American Wall Street financier and CEO of New York Global Group (NYGG). He began his financial career as an investment advisor and broker in Oklahoma in the late 1990s. Wey and NYGG were among the most active "facilitators and promoters" of reverse takeovers, which created Special-Purpose Acquisition Companies (SPAC) and allowed small Chinese companies to raise capital on U.S. markets, until reverse takeovers became the subject of a U.S. Securities and Exchange Commission investigation in 2011.