Universal Robots is a Danish manufacturer of smaller flexible industrial collaborative robot arms (cobots), based in Odense, Denmark. The business volume in 2020 was USD 219 million. The company has over 700 employees (2020) and over 1,100 partners around the world. [1]

Universal Robots was founded in 2005 by the engineers Esben Østergaard, Kasper Støy, and Kristian Kassow. [2] [3] During joint research at the Syddansk Universitet Odense, they came to the conclusion that the robotics market was dominated by heavy, expensive, and unwieldy robots. As a consequence they developed the idea to make robot technology accessible to small and medium-sized businesses. [4] In 2008 the first UR5 cobots were available on the Danish and German markets. In 2012 the second cobot, UR10, was launched. [5] At Automatica 2014 in Munich the company launched a totally revised version of its cobots. [6] One year later, in spring 2015, the table-top cobot UR3 was launched. [7] UR was purchased by Teradyne for US$285 million in 2015. [8] [9]

By 2019 Universal Robots was the number one cobot manufacturer in the world with Taiwanese competitor Techman taking second place. [10]

Universal Robots collaborative robots (cobots) can work right alongside personnel with no safety guarding, based on the results of a mandatory risk assessment. [14]

The safety settings of the latest generation of Universal Robots’ lightweight cobots can be adjusted for each specific solution. [15] The robot arm can run in two operating modes of the safety functions; a normal and a reduced one. A switch between safety settings during the cobot's operation is also possible. All these safety functions are safety rated PL d (EN ISO 13849:2008 ) and certified by TÜV NORD. [16]

UR's cobots are used within both small to medium-sized businesses and large corporations [17] within industries such as automotive, electronics, metal and machining, pharmaceuticals, and manufacturing.

In 2016, the company launched its online ecosystem Universal Robots+, and in early 2017 it launched a new online digital learning platform called Universal Robots Academy. Through this platform, users go through nine learning modules, learning how to program the UR collaborative robots.

In 2021, the Advanced Robotics for Manufacturing Institute recognized the Core Training program from UR Academy with an endorsement for their commitment to preparing students to pursue an Advanced Manufacturing / Robotics Industry 4.0 career. [19]

Olympic weightlifting, or Olympic-style weightlifting, is a sport in which athletes compete in lifting a barbell loaded with weight plates from the ground to overhead, with each athlete vying to successfully lift the heaviest weights. Athletes compete in two specific ways of lifting the barbell overhead: these are the snatch and the clean and jerk. The snatch is a wide-grip lift, in which the weighted barbell is lifted overhead in one motion. The clean and jerk is a combination lift, in which the weight is first taken from the ground to the front of the shoulders, and then from the shoulders to overhead. The clean and press, wherein a clean was followed by an overhead press, was formerly also a competition lift, but was discontinued due to difficulties in judging proper form.

The M252 81 mm medium weight mortar is a British-designed smooth bore, muzzle-loading, high-angle-of-fire weapon used for long-range indirect fire support to light infantry, air assault, and airborne units across the entire front of a battalion zone of influence. In the U.S. Army and U.S. Marine Corps, it is normally deployed in the mortar platoon of an infantry battalion. 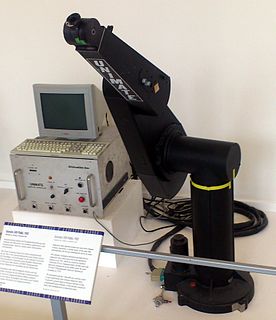 The PUMA is an industrial robotic arm developed by Victor Scheinman at pioneering robot company Unimation. Initially developed for General Motors, the PUMA was based on earlier designs Scheinman invented while at Stanford University. 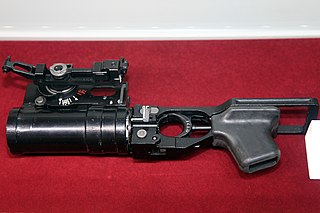 The GP-25 Kostyor ("Bonfire"), GP-30 Obuvka ("Footwear") and GP-34 are a family of Russian 40 mm under-barrel grenade launchers for the AK family of assault rifles. They were first seen by the West in 1984 during the Soviet Invasion of Afghanistan. The GP-30 was lightened and the redesigned sighting system was moved to the right. 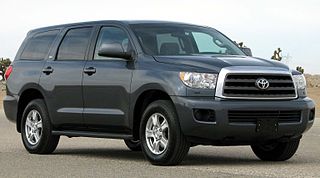 The Toyota Sequoia is a full-size SUV manufactured by Toyota mainly for the North American market since 2000 for the 2001 model year and derived from the Tundra pickup truck. It is the largest SUV ever produced under the Toyota brand, after the Japan-exclusive, military-focused Mega Cruiser.

Robot combat is a mode of robot competition in which custom-built machines fight using various methods to incapacitate each other. The machines have generally been remote-controlled vehicles rather than autonomous robots.

The Panzerfaust 3 is a modern semi-disposable recoilless anti-tank weapon, which was developed between 1978 and 1985 and first entered service with the Bundeswehr in 1987. It was first ordered in 1973 to provide West German infantry with an effective weapon against contemporary Soviet armor, thereby replacing West Germany's aging PzF 44 Light Lanze launchers and the heavy Carl Gustaf 84 mm anti-tank recoilless rifle manufactured in Sweden.

KUKA is a German manufacturer of industrial robots and systems for factory automation. It has been predominantly owned by the Chinese company Midea Group since 2016.

The L family is a family of inline four-cylinder diesel engines manufactured by Toyota, which first appeared in October 1977. It is the first diesel engine from Toyota to use a rubber timing belt in conjunction with a SOHC head. Some engines like the 2L-II and the 2L-T are still in production to the present day. As of August 2020, the 5L-E engine is still used in Gibraltar in the fifth-generation Toyota HiAce, eighth-generation Toyota Hilux, second-generation Toyota Fortuner, and fourth-generation Toyota Land Cruiser Prado. Vehicles with the diesel engine were exclusive to Toyota Japan dealership locations called Toyota Diesel Store until that sales channel was disbanded in 1988.

The Toyota UR engine family is a 32-valve dual overhead camshaft V8 piston engine series which was first introduced in 2006 as the UZ series it replaced began phasing out. Production started with the 1UR-FSE engine with D4-S direct injection for the 2007 Lexus LS. The series launched with a die-cast aluminum engine block, aluminum heads, and magnesium cylinder head covers. All UR engines feature variable valve timing for both intake and exhaust cams or Dual VVT-i. Timing chains are used to drive the camshafts. The UR engine has been produced in 4.6, 5.0, and 5.7-liter displacement versions.

A robotic arm is a type of mechanical arm, usually programmable, with similar functions to a human arm; the arm may be the sum total of the mechanism or may be part of a more complex robot. The links of such a manipulator are connected by joints allowing either rotational motion or translational (linear) displacement. The links of the manipulator can be considered to form a kinematic chain. The terminus of the kinematic chain of the manipulator is called the end effector and it is analogous to the human hand. However, the term "robotic hand" as a synonym of the robotic arm is often proscribed. 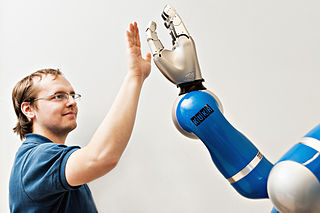 A cobot, or collaborative robot, is a robot intended for direct human robot interaction within a shared space, or where humans and robots are in close proximity. Cobot applications contrast with traditional industrial robot applications in which robots are isolated from human contact. Cobot safety may rely on lightweight construction materials, rounded edges, and inherent limitation of speed and force, or on sensors and software that ensure safe behavior. 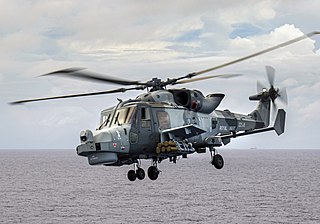 Martlet is a lightweight air-to-surface, surface-to-air, and surface-to-surface missile developed by Thales Air Defence for the United Kingdom. It is named after a mythical bird from English heraldry that never roosts, the martlet.