University Circle Properties Development, Inc. (UCPD, Inc.) was a commercial property development corporation established in 1968 in Cleveland Ohio. Located in the University Circle area at the famous intersection of Euclid Avenue [1] and East 105th Street, the area came to be known colloquially during the 1960s and 1970s as "105 and Euclid" and "The Block". Founded by a young African-American businessman, Winston E. Willis, UCPD, Inc. was the umbrella organization for a number of thriving businesses on the lower East side. After operating successfully for over fifteen years, and following decades of courtroom confrontations and legal battles over property rights, UCPD, Inc. and all of its popular 105th and Euclid businesses were demolished in 1982 to make way for the continuing expansion of the Cleveland Clinic Foundation and numerous government sponsored redevelopment projects. 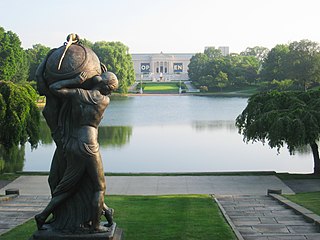 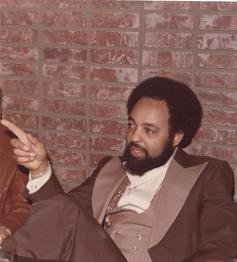 Winston Earl Willis is a former American real estate developer who established his business in Cleveland, Ohio during the early 1960s. He created University Circle Properties Development, Inc., which owned real estate parcels in Cleveland and was the largest employer of black people in that part of the country. Under UCPD at East 105th and Euclid, upwards of 23 businesses operated simultaneously. In the 1970s and 80s Willis ran afoul of tax and other laws and lost his properties to seizure in 1983. His ongoing legal battles with the city of Cleveland over ownership of his lands spans several decades, including his 2007 petition to the U.S. Supreme Court. 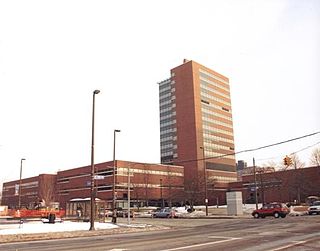 East 105th Street and Euclid Avenue is the most famous intersection in the city of Cleveland, Ohio. The legendary commercial junction consists of several blocks from East to West between 107th Street and 105th Street.

The Euclid Avenue and East 105th Street intersection, originally known as Doan’s Corners, was the site of the old Keith's East 105th St. Theater, where comedian Bob Hope got his start in Vaudeville. University Circle Properties Development, Inc. was founded in 1968 by a local young African-American entrepreneur, Winston E. Willis. His purchase of the property followed a long and contentious legal struggle with the former titleholder, the Cleveland Trust Company and other Cuyahoga County officials. Questions were raised by University Circle Incorporated(UCI), the Cleveland Clinic, and others as to his qualifications to own and redevelop “blighted” property.During the turbulent riot-torn 1960s, local events e.g., the Reverend Bruce W. Klunder bulldozer murder, the Hough Riots, and the Glenville Shootout [2] had begun to trigger white flight and businesses on Euclid Avenue were being closed, boarded up and sometimes abandoned. 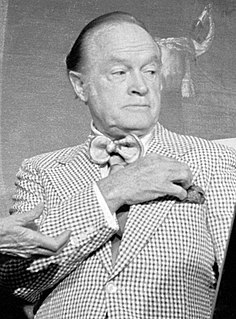 Leslie Townes Hope, known professionally as Bob Hope, was an American stand-up comedian, vaudevillian, actor, singer, dancer, athlete, and author. With a career that spanned nearly 80 years, Hope appeared in more than 70 short and feature films, with 54 feature films with Hope as star, including a series of seven "Road" musical comedy movies with Bing Crosby as Hope's top-billed partner. 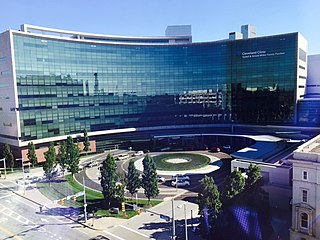 The Cleveland Clinic is an American academic medical center based in Cleveland, Ohio. Owned and operated by the Cleveland Clinic Foundation, an Ohio nonprofit corporation established in 1921, it runs a 170-acre campus in Cleveland, as well as 10 regional hospitals and 19 family health centers in north-east Ohio, and hospitals in Florida and Nevada. Tomislav Mihaljevic is the president and CEO. 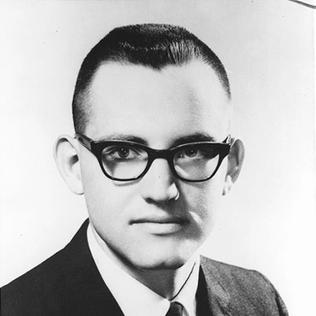 Reverend Bruce W. Klunder was a Presbyterian minister and civil right activist, born in Colorado. He died when he was run over by a bulldozer while protesting the construction of a segregated school in Cleveland, Ohio. Klunder graduated from Yale Divinity School and then went to Cleveland in 1961 as assistant executive secretary of the Student Christian Union at Western Reserve University. He quickly became involved in the city's civil rights fight. He had a passionate interest in civil rights, headed the local chapter of the Congress of Racial Equality (CORE), and led a restaurant sit-in in Sewanee, Tennessee in 1962. He was married, with two young children.

UCPD, Inc. was “…organized to plan and implement the redevelopment of Cleveland’s Euclid Avenue and 105th Street area after too many years of social indifference.”

Following his eventual acquisitions, UCPD, Inc. went on to develop and operate 23 small businesses at the site [3] employing more than 400 workers (most of whom were people of color), at a time when very little prospect for economic advancement was open for local minorities in Cleveland’s inner-city. The popular strip, often referred to as “an inner-city Disneyland”, was one of the most strategic and valuable real estate parcels in the city and flourished for 15 years.

The UCPD, Inc. businesses stood in the way of the city’s plans [4] for creating a medical- educational complex connecting Case Western Reserve University, University Hospitals, and the Cleveland Clinic Foundation. [5] Willis had faced legal troubles with the city, including violations of tax law. He was convicted on a bad check charge, and while he was imprisoned in 1982, the city seized his properties and demolished them, freeing the land for the large medical development. [6] [7] 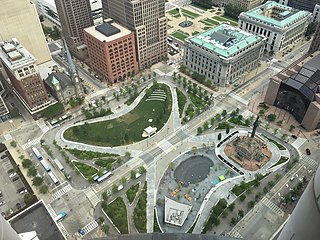 Public Square is the two-block central plaza of downtown Cleveland, Ohio. Based on an 18th-century New England model, it was part of the original 1796 town plat overseen by Moses Cleaveland, and remains today as an integral part of the city's center. The 10-acre (4.0 ha) square is centered on the former intersection of Superior Avenue and Ontario Street. Cleveland's three tallest buildings, Key Tower, 200 Public Square and the Terminal Tower, face the square.

Heinen's Grocery Store is a family-owned and operated regional supermarket chain in Northeast Ohio and in the Chicago Metropolitan Area. 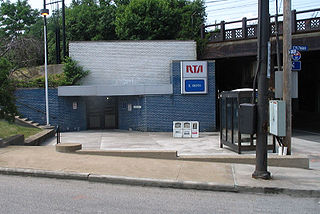 Euclid–East 120th was a station on the RTA Red Line in the University Circle neighborhood of Cleveland, Ohio, USA. It was located at the Euclid Avenue and Coltman Road intersection, near the western end of Lake View Cemetery. At the end of service on August 11, 2015, it became the first, and thus far only, station in the history of the RTA to permanently close.

The Cleveland Leader was an online Cleveland-based news publication focused on covering Cleveland news, culture, and events, and other national and international interest stories. 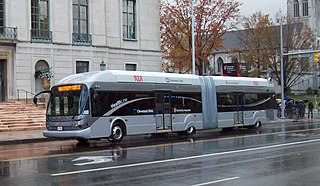 The HealthLine is a bus rapid transit (BRT) line run by the Greater Cleveland Regional Transit Authority in Cleveland and East Cleveland, Ohio, United States. The line runs along Euclid Avenue from Public Square in downtown Cleveland to the Louis Stokes Station at Windermere in East Cleveland. It began operation on October 24, 2008. Its current name was the result of a naming rights deal with the Cleveland Clinic and University Hospitals of Cleveland. The HealthLine is denoted with a silver color and abbreviated simply as HL on most RTA publications.

The Lake Shore Electric Railway was an attempt to start an electric railway museum in Cleveland, Ohio.

Homer Marshman was the first owner of the Cleveland Rams, now known as the Los Angeles Rams. Mr. Marshman, a prominent Cleveland, Ohio lawyer and businessman who received his law degree from Harvard School of Law, served as special counsel to Ohio's attorney general from 1934 to 1947. He founded the Rams along with player-coach Damon "Buzz" Wetzel in 1936, when it played one successful yet financially disastrous year in the American Football League, then acquired a National Football League franchise for the team on February 13, 1937. Marshman and the other Rams stockholders paid $10,000 for the NFL franchise, then put up $55,000 to capitalize the new club.

The Wade Park District is an historic district on the National Register of Historic Places, located in the University Circle neighborhood on the east side of Cleveland, Ohio. The district, which covers roughly 650 acres, is bounded by Chester Avenue and Euclid Avenue on the south, East Boulevard to the east and E. 105th Street to the west. The district, which includes seven separate buildings, features several of the city's cultural institutions, as well as the park of the same name. 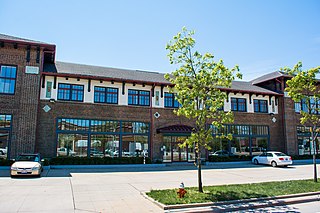 The Fairfax neighborhood is on the East Side of Cleveland, Ohio. It is roughly bounded between Euclid Avenue to the north, Woodland Avenue to the south, E. 71st Street to the west and E. 105th Street to the east. Fairfax is located on the edge of University Circle, an area containing Cleveland’s major educational institutions and museums. The Karamu House is on the National Register of Historic places and is the nation's oldest African-American theater. The northeastern quadrant of Fairfax, along Euclid Avenue to 105th Street, is dominated by the Cleveland Clinic. 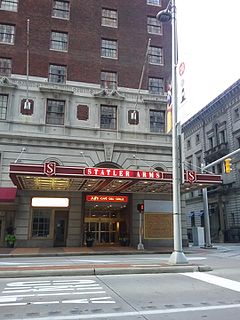 The Statler Arms Apartments is a historically renovated former Statler Hotel high-rise in the Theater District on East 12th Street and Euclid in downtown Cleveland that was converted into 295 apartments in 2001. The Statler Arms is 192 feet (59 m) high and rises to 14 floors above the street. 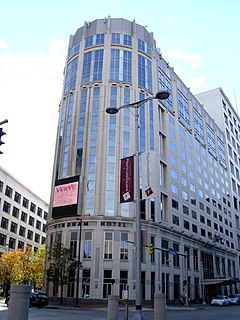 The Leader Building is a 1913-completed 199 foot, 15 story, 322,600-square-foot high-rise located in downtown Cleveland, Ohio's Public Square district. It sits along the heavily travelled Superior Avenue. The building is named after the former Cleveland daily newspaper, "The Leader" which was founded by Edwin Cowles in 1854 and ran until it was sold to the Plain Dealer in 1917. The building is an excellent example of beaux arts architecture style, which was very popular at the time of its erection.

The K & D Group, of Willoughby, Ohio, is an American major real-estate holder of several prominent office and residential properties in downtown Cleveland. Among the properties they own are:

Cleveland Clinic was established in 1921 as a hospital in Cleveland, in the U.S. state of Ohio. 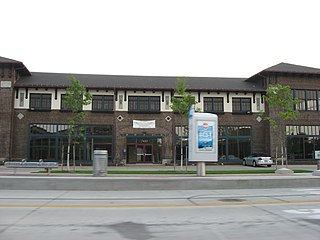 The Baker Motor Vehicle Company Building, also known as the Baker Electric Building, is a historic commercial building in Cleveland, Ohio, in the United States. Built in 1910, it was the first showroom of the Baker Electric Motor Car Co., a pioneer in Brass Era electric automobiles. Baker Electric merged with Rauch and Lang in 1914, and the building was sold in 1920. It served as an auto dealership, machine shop, and print shop for the next 86 years. The structure underwent a two-year renovation and historic preservation from 2006 and 2008, and now serves as a startup business incubator.