The collections of the museum

The University of Tartu Museum’s collections have been part of the Estonian National Cultural History Collection since 2004.

The museum's emphasis is on science history and the collection of scientific equipment. The collection comprises 73,398 items, documents and photos. [1]

The museum collection is divided into eight categories: [2]

Tartu is the second largest city of Estonia, after Estonia's political and financial capital Tallinn. It is situated 186 kilometres southeast of Tallinn and 245 kilometres northeast of Riga, the capital of Latvia. The distance to Estonia's summer holiday capital Pärnu in the west is 176 kilometres and the fastest route there by car is through Viljandi and Kilingi-Nõmme. Tartu lies on the Emajõgi, which connects the two largest lakes of Estonia, Lake Võrtsjärv and Lake Peipus. The city is served by Tartu Airport.

The Tartu Observatory is the largest astronomical observatory in Estonia. On January 1, 2018, Tartu Observatory joined again to Tartu University, and the observatory is now an institute of the university. It is located on the Tõravere hill, about 20 km south-west of Tartu in Nõo Parish, Tartu County. The old Tartu Observatory located in Tartu city centre, is known internationally for its connection to Friedrich Georg Wilhelm von Struve and the Struve Geodetic Arc, of which it is the first reference point. 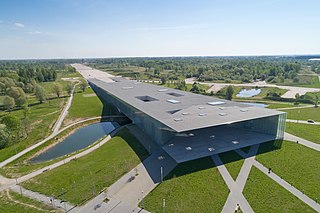 The Estonian National Museum founded 1909 in Tartu is a museum devoted to folklorist Jakob Hurt's heritage, to Estonian ethnography and folk art. The first items for the museum were originally collected in the latter part of the 19th century. 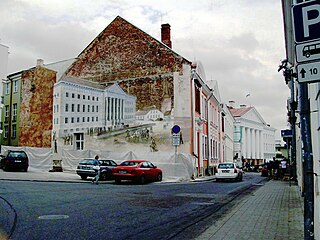 The Ülikooli Street is a street in the center of Tartu in Estonia. Named after the University of Tartu whose main building is located on this street, it runs through the business district, passes behind the Town Hall building, and hosts a number of University-related facilities, including the university cafe, Von Bock House, the university book shop and the old Faculty of Chemistry building, which is also called the Marx Building. The Barclay Square, location of the Barclay de Tolli bust, and the Pirogov Square, location of the Nikolay Ivanovich Pirogov statue, are adjacent to the street.

Tartu Cathedral, earlier also known as Dorpat Cathedral, is a former Catholic church in Tartu (Dorpat), Estonia. The building is now an imposing ruin overlooking the lower town. In the small part of it that has been renovated is now located the museum of the University of Tartu, which the university also uses for major receptions.

Tio Tepandi is an Estonian artist. She was born in Lüganuse, Estonia. Her grandfather was a gardener of the local estate. The memories of her birthplace, its beauty and harmony have always accompanied and influenced the artist. 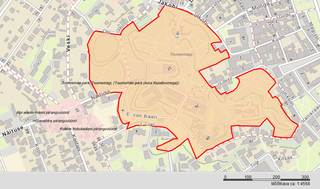 Toomemägi is a hill in Tartu, Estonia.

Tartu Toy Museum is the biggest toy museum in the Baltic States, located in Tartu, Estonia. It displays over 5000 toys from its vast collection and has several interactive toys for the visitors to try out, as well as a playroom for children. In 2005 the film puppets exhibition was opened in the courtyard house, exhibiting film puppets made in Estonia over the last 50 years, props and sketches of animated movies.

Liis Koger is an Estonian painter and poet based in Tallinn.

Raadi Manor was in the area known as Raadi-Kruusamäe, on the outskirts of Tartu in Estonia. The manor and Raadi Manor Park were the home to the Liphart noble family who were significant art collectors. The family moved away and the buildings housed the Estonian National Museum until the manor was destroyed during the Second World War. Part of the grounds became Raadi Airfield which was used as a secret Soviet bomber base for fifty years. Today the park is open, some buildings are in use by the museum and plans are underway to create a new museum building here. 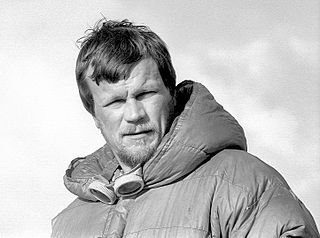 Jaan Künnap is an Estonian mountaineer, photographer, and sports coach.

Tartu Art Museum is a state-owned museum of art located in Tartu, Estonia. It was founded in 1940 on a private initiative by the members of local art school Pallas. This is the largest art museum in Southern Estonia.

Tartu Ülikool 350 is a mountain peak in Central Pamir. It was first reached in 1982 to celebrate the 350th anniversary of the founding of the University of Tartu. It is located in the Tanimas mountain range in Tajikistan. At the time of first ascent it was considered to be the highest unreached peak in the territory of the former Soviet Union. 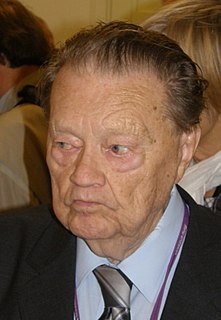 Tullio Ilomets was an Estonian chemist, science historian and a volunteer in heritage protection. 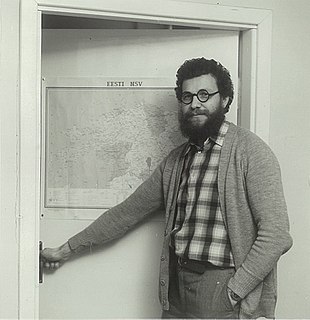 Tiit Kaljundi was an Estonian architect and a member of the Tallinn School. He became well known in the later part of the 1970s as a part of a new movement of Estonian architects that was led by Leonhard Lapin and Vilen Künnapu. The majority of the architects in this movement were graduates from the State Art Institute in the early 1970s. This group included Kaljundi, Avo-Himm Looveer, Ain Padrik, Jüri Okas, and Ignar Fjuk, as well as Veljo Kaasik and Toomas Rein from an older generation of architects. After the 1983 exhibition in the Tallinn Art Salon, they became known as the “Tallinn Ten" or the "Tallinn School," a broader term to describe the group used by the Finnish architect Markku Komonen.

Kaur Alttoa is an Estonian art historian and cultural historian.