Deshamanya Manicavasagar Vaithalingam (December 17, 1906 - December 12, 1993) was a Sri Lankan lawyer, Puisne Justice of the Supreme Court of Sri Lanka, Chancellor of the University of Jaffna [1] and Chairman of the Commercial Bank of Ceylon. [2]

Vaithalingam was born on December 17, 1906 to prominent Colombo stockbroker Mudaliyar Arunachala Vaithalingam. Both his paternal and maternal family hails from the affluent town of Manipay, Jaffna. He began his education at the Royal College, Colombo [3] where he excelled in academics and went on to obtain a degree in law from the Colombo Law College.

Vaithalingam joined the judicial service 9 years after being called to the bar, as an Acting Magistrate in Mallakan. For over two decades, he functioned as a Magistrate and District Judge in different parts of the island and in October, 1962, he was appointed a Commissioner of Assize. He continued as such till his appointment to the Supreme Court of Sri Lanka in 1964 by President Sirimavo Bandaranaike.

Mentioned below are a few of the numerous judgments in which Justice Vaithalingam was involved. All of the cases below are from the Supreme Court of Sri Lanka and no judgments from lower courts have been included. [4]

Cases in which referred to for Common Law purposes

After retiring from the Supreme Court, Vaithalingam was appointed Chairman of the Commercial Bank of Ceylon and was then appointed as the first Chancellor of the University of Jaffna.

In Retirement, he was a member of both the Citizen Committee and the Delimitation Committee among many others. A devote Hindu, he also served as President of the Educational Society for many years. [5]

As Chancellor of the University of Jaffna

Vaithalingam was appointed as the first Chancellor of the University of Jaffna by the President of Sri Lanka with effect from the first of January, 1979. In the course of his tenure, which lasted half a decade, he presided over the first convocation held at the Veerasingam Hall on the 13th of September 1980 and also delivered the very first convocation address. He was also conferred with a Doctorate by the University. [6]

Vaithalingam was awarded the Deshamanya Award within two years of its founding in 1987. [7] He was the first Sri Lankan Tamil to receive the award and the appearance of common ground between the government and a prominent Tamil caused an adverse reaction from the Liberation Tigers of Tamil Eelam. The LTTE called on him to refuse the reward, if he valued his life; however, Vaithalingam defied the outfit and accepted the honour.

In the citizens committee chaired by his good friend and former colleague on the bench, O. L. de Kretser, he worked on the Report of the Commission of Inquiry, on the Tragedy of January Tenth 1974 along with Bishop Sabapathy Kulendran of the Church of South India in Jaffna. [8]

"I went to the office of the Government Agent in Colombo in July 1973. In order to find my way to the officer I wanted to meet, I saw a board in Sinhala only. I enquired in English from the clerk who was seated behind the counter as to what it said. His reply in Sinhala was “Don’t you know how to read Sinhala?” I replied in English that I could not understand what he said. He said in Sinhala: “Go and learn Sinhala and come back.” A bystander told me what the board conveyed" - Justice Manicavasagar Vaithalingam 1974

They have two children: (1)Arunachala Manicavasagar, JP, who married Skandaleela - daughter of Proctor Sivakolundu Rajendran (JP, NP) and his wife Kamalambigai, youngest daughter of Stowell Elaithamby Murgesampillai - and his younger sister, (2)Nirmala Ragunanthan, who was married to the late Ragunanthan Thambimutha, Managing Director of Raniyo (Pvt) Ltd. Both of his children continue to live in Colombo while his grandchildren reside in North America.

Vaithalingam and his wife were prominent members of the upper echelons of society; however, he and his wife were both devout Hindus engaged in several charitable works. Vaithalingam was very close to his wife and largely left society life for a spiritual undertaking and much-subdued persona following her passing.

Vaithalingam remained close friends with Junius Richard Jayewardene up until his death in 1993. As per an anecdote by Justice Naharaja, when the former president came to visit Vaithalingam while he was on his deathbed, Vaithalingam in a sour state joked about the workings of society by telling Jayewardene that though he had time and again bested him in every academic endeavor throughout their academic career, he had only become a Supreme Court Judge whilst it was Jayewardene that had become President - questioning the workings of society. The statement was quickly laughed away.

Junius Richard Jayewardene, commonly abbreviated in Sri Lanka as J. R., was the leader of Sri Lanka from 1977 to 1989, serving as Prime Minister from 1977 to 1978 and as the second President of Sri Lanka from 1978 to 1989. He was a leader of the nationalist movement in Ceylon who served in a variety of cabinet positions in the decades following independence. A longtime member of the United National Party, he led it to a landslide victory in 1977 and served as Prime Minister for half a year before becoming the country's first executive president under an amended constitution. 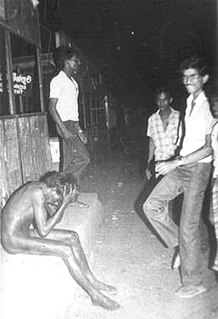 Black July is the common name used to refer to the anti-Tamil pogrom that occurred in Sri Lanka during July 1983. The pogrom was premeditated, and was finally triggered by a deadly ambush on 23 July 1983, which caused the death of 13 Sri Lanka Army soldiers, by the Tamil militant group Liberation Tigers of Tamil Eelam (LTTE). Although initially orchestrated by members of the ruling UNP, the pogrom soon escalated into spontaneous mass violence with significant public participation.

Sinhalisation is a term, derived from Sinhala, that has number of meanings in Sri Lanka.

Deshamanya is the second-highest national honour of Sri Lanka awarded by the Government of Sri Lanka as a civil honour. It is awarded for "highly meritorious service", and is conventionally used as a title or prefix to the recipient's name. 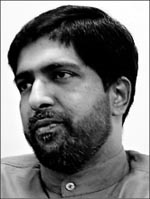 Sri Lanka Law College is a Law College on Hulftsdorp Street in Colombo, Sri Lanka, established in 1874 under the then-one-year-old Council of Legal Education in order to impart a formal legal education to those who wished to become advocates and proctors in Ceylon. The main building of the college was constructed in 1911.

Manipay or Maanippaai is an affluent town in the northern Jaffna District of Sri Lanka. The original name of Manipay is Periyapulam. It was a mission location when the American Ceylon Mission (ACM) came to Sri Lanka in the 19th century. Dr. Samuel Fisk Green founded the Green Memorial Hospital in 1864 in this village. It was also known as Manipai. There are number of schools in the village, some of which were founded by ACM. The 104-year-old Manipay Hindu College and the 53-year-old Manipay Hindu Ladies College, both High Schools, are prominent. The village also contains Hindu temples and churches. The Manipay Maruthady Pillaiyar Temple stands out.

Felix R. Dias Bandaranaike was a Sri Lankan lawyer and politician, who served as Cabinet Minister of Finance, Parliamentary Secretary for the Prime Minister and Defence and External Affairs (1960–1965) and Cabinet Minister of Justice (1970–77) in the cabinet of Prime Minister Sirima Bandaranaike. He was a very popular person about the anti-corruption campaign and also known as the "virtual leader of the state" during the SLFP governments after the death of Prime minister S.W.R.D. Bandaranaike. He was very active in defeating two major coups against the government, one is 1962 attempted military coup and JVP's 1971 JVP Insurrection.

Deshamanya Hector Wilfred "Harry" Jayewardene, QC was a prominent Sri Lankan lawyer. In 1979 he was chairman of a UNESCO conference on human rights in Bangkok and later chairman of the Sri Lanka Foundation Institute. He was member at the United Nations Commission on Human Rights.

Justice Eugene Wilfred Jayewardene, KC was a Ceylonese judge, lawyer and politician. He was a Judge of the Supreme Court of Ceylon and is the father of J. R. Jayewardene the first executive President of Sri Lanka. 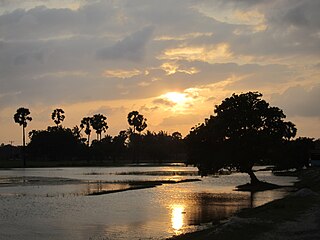 Deshamanya Suppiah Sharvananda was the 37th Chief Justice of Sri Lanka and the first Governor of the Western Province. 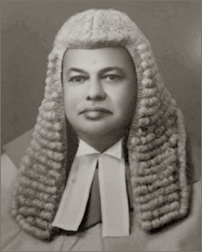 Deshamanya Justice Pathmanathan Ramanathan was a leading Sri Lankan Tamil lawyer and judge. Known as Rama, he was a High Court judge, Court of Appeal judge, provincial governor, university chancellor and a judge of the Supreme Court of Sri Lanka. 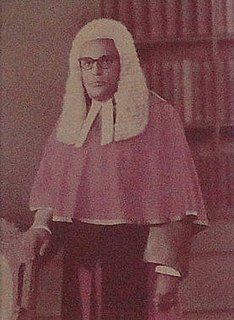 Deshamanya Justice Henry Wijeyakone Thambiah (1906–1997) was a Ceylonese academic, diplomat, lawyer and judge, born in Sri Lanka during British colonial rule. He was a Commissioner of Assize, High Commissioner and judge of the Supreme Courts of Ceylon and Sierra Leone. 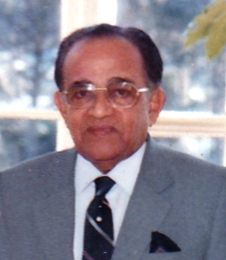 Justice John Adrian St. Valentine W. Jayewardene (1877–1927) was a Ceylonese judge and lawyer. He was a Judge of the Supreme Court of Ceylon.