Montenegro started her acting career as one of the new talents launched by ABS-CBN's talent management arm Star Magic in 2006. [1] Her first acting role was in a one-episode stint in the comedy fantasy series Da Adventures of Pedro Penduko , playing a younger version of Gloria Romero's character Maria.

In 2007, Montenegro appeared in Ysabella and played a ghost in her first feature film Hide and Seek. [2]

In 2008, she transferred as a non-exclusive talent in the Kapatid Network and was seen on TV5's teen drama series HushHush and sketch comedy show Lokomoko.

In 2015, she moved to GMA-7 after signing an exclusive contract and usually plays either villain or comedic roles in many of the network's teleseryes and is regularly seen on Bubble Gang.

Montenegro is the granddaughter of actors Mario Montenegro and Letty Alonzo. [1] [5] [3] Her father, Iñaki Vicente, was a footballer for the Philippine national team. [6] [7] [8]

Montenegro obtained her degree in fashion design and merchandising from De La Salle-College of Saint Benilde in 2013. [9]

Rosemarie Joy Garcia-Smith, better known by her stage name Diana Zubiri, is a Filipino actress. She was discovered by Seiko Films when she was 15 years after applying for work in Japan. She then had sexy roles in various films by Seiko. In October 2002, Zubiri became widely known in the Philippines after posing on the top of the EDSA–Shaw flyover in Mandaluyong, wearing only a two-piece bikini. That photo shoot for FHM Philippines sparked controversy and prompted the then Mayor of Mandaluyong, Benhur Abalos, to file charges against Zubiri and FHM but it was later withdrawn after an apology.

Madeleine Lauren Humphries, known professionally as Madeleine Humphries and formerly as Carla Humphries is an American-born Filipino actress and commercial model. She was born in California to a Filipino mother and an Italian-American father. Humphries is best known for her roles as Rita Arguelles in the television drama Bituing Walang Ningning (2006), and as Brenda Smith in the youth-oriented program Abt Ur Luv (2006). She also appeared on the January 2011 cover of FHM Philippines Magazine.

Melissa Marie Ricks-Macatangay is a Filipino actress of American descent. She was a runner-up in the reality talent search Star Circle Quest on ABS-CBN.

Matthew Nicolas Evans is a Filipino actor of White American descent who was a contender of the Philippine reality television show Pinoy Big Brother: Teen Edition 1. He rose to fame through his Filipino teleseryes Komiks Presents: Da Adventures of Pedro Penduko, Tanging Yaman and Rosalka. He finished college at Far Eastern University in Manila.

Francisco Moreno Domagoso, also known by his stage name Isko Moreno, is a Filipino politician and actor currently serving as the 22nd mayor of Manila since 2019. Before heading the capital of the Philippines, he first gained notability as an actor and television personality. He entered politics in 1998, and ran for city councilor and was elected for three consecutive terms. In 2007, he ran as vice mayor of Manila and was elected for three consecutive terms. In 2016, He was term-limited as vice mayor and unsuccessfully ran for senator in the 2016 senatorial elections. He placed 16th out of 50 candidates. He then served in the Duterte cabinet as social welfare undersecretary for a few months in 2018 before running and being elected mayor of Manila in a landslide victory against his former allies Joseph Estrada and Alfredo Lim in the 2019 local elections.

Jessy Mendiola is a Filipino actress.

Michael Paulo Lingbanan Avelino is a Filipino actor. Known in television series such as Walang Hanggan (2012), Bridges of Love (2015), The General's Daughter (2020) he made a breakthrough role as Gregorio del Pilar in the Philippine war epic Heneral Luna (2015), which he reprised in a titular role for its sequel, Goyo: Ang Batang Heneral (2018).

Hiyasmin Neri is a Filipino actress, host and musician. 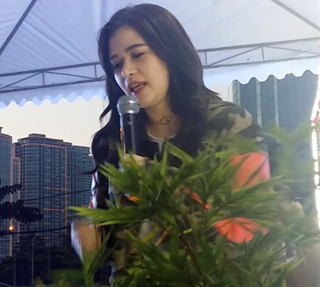 Maricar Reyes-Poon, is a Filipino actress.

Mara Hautea Schnittka, known professionally as Julia Montes, is a Filipino actress of German descent. She is one of the most sought-after actresses in the country and one of the most versatile actresses in Philippine cinema In 2013, Yes! Magazine listed her at number one spot on their list of 100 Most Beautiful Stars and placed fourth as one of the most influential celebrities the year prior. She was also listed for six consecutive times (2012-2017) on FHM's annual list of Philippines Sexiest Women. She is heralded as the reigning "Daytime Drama Queen" by the media.

Isabelle Diaz Daza-Semblat is a Filipina actress, television host and model. She is the daughter of Miss Universe 1969 titleholder, Gloria Diaz. She was a member of GMA Network's roster of young talents and was introduced to the mass media entertainment audiences during a dance number on the noontime show Party Pilipinas on April 17, 2011. On November 24, 2014, Daza transferred to ABS-CBN and signed a two-year exclusive contract. She gained recognition for her role in the drama series Tubig at Langis. 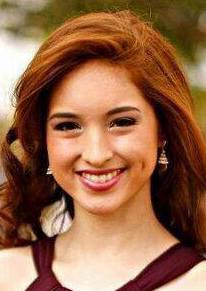 Danielle Claudine Ortega Garcia-Crawford, known professionally as Coleen Garcia, is a Filipina actress, host, and model. Garcia started her career as a child and teenager appearing in several commercials. She was eventually signed by Star Magic, where she has starred in several television series and films produced by ABS-CBN. From 2012 to 2016, she co-hosted the channel's noontime variety show It's Showtime, which she had left to focus solely on her acting career. Garcia's lead roles include the films Ex with Benefits (2015), Love Me Tomorrow (2016), and Sin Island (2018), as well as the teleseryesPasión de Amor (2015–2016) and Ikaw Lang ang Iibigin (2017–2018).