In May 2011, he moved to Vietnam and signed a contract with Navibank Saigon F.C.

In 2019, he moved to Pattani, Thailand and signed a contact with Pattani FC

Bossou was part of the Togolese squad for the 2010 African Cup of Nations which withdrew prior to playing a match due to the Togo national football team attack. [4]

The Togolese Football Federation or FTF is the governing body of football in Togo. In 2006, the Togo national football team participated for first time in the 2006 World Cup in Germany.

The Étoile Sportive du Sahel, is a sports club from Sousse in the Sahel region of Tunisia, known primarily for its football and basketball team. The club also has sections for handball, volleyball, judo and wrestling. ESS was founded on 11 May 1925 after a general meeting under the chairmanship of Chedly Boujemla, Ali Laârbi and Ahmed Zaklaoui, at the headquarters of the Association of the ancient French-Arab School in Laroussi Zarouk Street, in the heart of the old town of Sousse. The aim of the meeting was to establish a sports education society. The Tunisian flag was chosen in the selection of the colors of the team. The red shirt with the star and the white shorts. The French colonial authorities prevented the use of these colors, but with the insistence of the team leaders they prevailed and in the latter they played this kit. In English the name means SportStar of the Sahel

Roger Léon Maurice Lemerre-Desprez is a French professional football manager and former player. During his managerial career, he was in charge of three national teams: the French, Tunisian and Moroccan national teams. He also managed numerous clubs in France, Tunisia, Turkey and Algeria. He is currently the head coach of Étoile du Sahel.

Kossi Agassa is a French-Togolese former professional footballer who played as a goalkeeper. He spent most of his club career in France. Between 1999 and 2017, he made 74 FIFA-official appearances for the Togo national team.

Jacques-Alaixys Romao, commonly known as Alaixys Romao, is a French-Togolese professional footballer who plays as a midfielder for Guingamp in the Ligue 2. At international level, he is a member of the Togolese national team.

Daré Nibombé is a Togolese former defender who last played for RBD Borinage. He is currently the head coach of the U21 squad of Tubize.

Yassine Chikhaoui is a Tunisian professional footballer who plays as an attacking midfielder for Tunisian club Étoile du Sahel.

Kodjovi Dodji Akanava Obilalé is a Togolese former footballer who played as a goalkeeper. His last club was the French amateur club GSI Pontivy. His career was cut short after he was severely injured in a bus attack against the Togolese team that took place in the Cabinda Province, Angola, just days before the start of the 2010 African Cup of Nations.

The Coupe du Togo is the top knockout tournament of the Togolese football.

Moussa Narry is a Ghanaian professional footballer who last played as a defensive midfielder for Riffa SC. 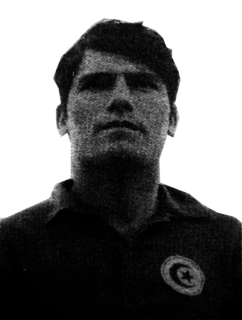 Abdelmajid Al-Chetali is a Tunisian football coach and former player who played a total of 70 games with the national team and scored four goals. He participated also in 1960 Summer Olympics. He now enjoys a high profile in Tunisia but refuses to take over the selection. He is considered one of the characters who shaped and prolonged the legend of the Étoile Sportive du Sahel. He received only one yellow card during his career.

William George Berry, known in England as Bill Berry and in Francophone nations as George Berry or Georges Berry, was an English professional footballer who made over 130 appearances as an outside left in the Football League for Brentford. He also played league football for Gillingham, Charlton Athletic, Crystal Palace and Bournemouth & Boscombe Athletic and after his retirement he had a 30-year management career with clubs in France, Belgium, Tunisia and Luxembourg.

Emmanuel Mathias is a Togo international footballer, who is currently a free agent.

Cédric Mensah is a French-born Togolese professional footballer who plays as a goalkeeper. He has been a member of the Togo national team.

Faouzi Benzarti, is a Tunisian former footballer and current football coach of CS Sfaxien. He spent his entire career as a player at his home club US Monastir without any achievements. His training career began and was only 29 years old, making it the youngest Tunisian coach at the time. He is considered one of the most successful coaches in Tunisia: he is most coach holding the Tunisian League with 9 Titles. He usually uses offensive play and a high-pressure plan as he is known for his toughness in training and his excessive anger towards his players and referees. During his managerial career, he was in charge of two national teams: the Tunisian and Libyan national football teams, he was also close to signing with the Moroccan team in 2016 before appointing Hervé Renard.

Radhouène Felhi is a Tunisian former professional footballer who played as a defender or defensive midfielder. 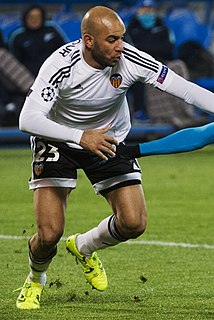 Aymen Abdennour is a Tunisian professional footballer who plays as a central defender for Qatari club Umm Salal.