Visqueen is an American power pop/punk rock band from Seattle, Washington, United States, formed in 2001. It is named after a brand of polyethylene film that United States Secretary of Homeland Security Tom Ridge once recommended as a defense against bioterrorism.

The band's original members were singer-songwriter-guitarist Rachel Flotard and drummer Ben Hooker, both formerly of Hafacat; Allan Ross (guitar; left in November 2001), and Kim Warnick, formerly of the Fastbacks. Warnick retired at the end of 2004, but Muffs co-founder Ronnie Barnett signed on to play the bass during the band's 2005 tour. Early in 2006, Bill Coury, formerly of Once For Kicks & Sourmash, joined the band as bassist, and later Tom Cummings, formerly of Once For Kicks and Sourmash, joined the band as a second guitarist. Late in 2006, Bill Coury left the band and by spring 2007, Barrett Jones, producer (Foo Fighters, The presidents of the United States of America), joined Visqueen as bassist.

Their current bassist is Cristina Bautista. Bautista also played bass in Connecticut Four, from Bellingham, Washington, and in 2006 put out a solo EP, This Is the Team.

Flotard has performed as backup singer in support of Neko Case and Jon Rauhouse, a pedal steel guitar player and multi-instrumentalist who often tours with Case.

Visqueen's third album, Message to Garcia, was released in 2009 on Flotard's own label, Local 638 Records, named for the labor union that Flotard's late father belonged to. [1]

Flotard was featured on Minus the Bear's song "Into the Mirror" from their album Omni .

Visqueen played what were announced as their final shows in 2011, with a farewell show at the Neptune Theater in November of that year. On November 28, 2016, after a five-year hiatus, Visqueen reunited as Flotard, Hooker, and Bautista for a live show at the Crocodile Lounge in Seattle as the opening act for X. 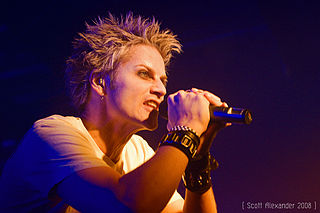 Econoline Crush is a Canadian rock band from Vancouver, British Columbia, Canada formed in 1992. They have released five studio albums as well as singles such as "Wicked", "Home", "Surefire", "All That You Are", "Sparkle & Shine", "You Don't Know What It's Like", "Make It Right" and "Dirty". 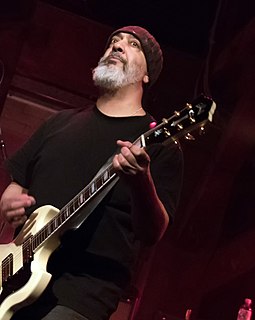 Mike Inez is an American rock musician best known for his role as the bassist of Alice in Chains since 1993. He is also recognized for his work with Ozzy Osbourne from 1989–1993. Inez has also associated with Slash's Snakepit, Black Label Society, and Heart. He is of Filipino descent.

Three Imaginary Girls is a Seattle-based website that showcases the music of the Pacific Northwest. Self-described as "Seattle's sparkly indie-pop press", since its founding in 2002, the site has featured hundreds of reviews of albums, live music, film, theater, interviews, political commentary, and even love advice, in Seattle and beyond. 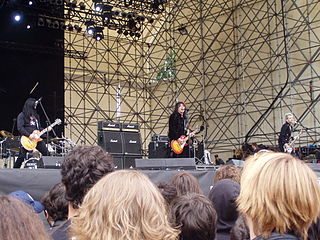 Tigertailz are a Welsh glam metal band hailing from Cardiff, Wales. They are most famous for their 1990 album, Bezerk which made the Top 40 in the UK Albums Chart and spawned the hit singles "Love Bomb Baby" and "Heaven". The band reformed in 2005. 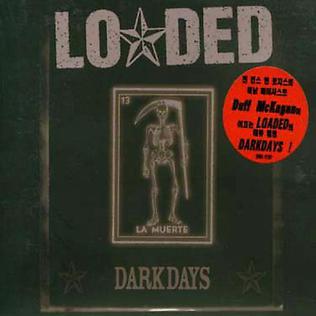 Dark Days is the debut studio album by American rock band Loaded. Recorded between December 2000 and February 2001 at Jupiter Studios in Seattle, Washington, it was self-released in July 2001. 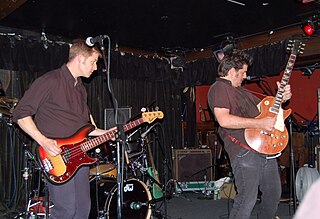 Alien Crime Syndicate, often abbreviated to ACS, were a rock band formed in San Francisco, California, in 1997. From 1999 to the band's breakup in 2005, the lineup consisted primarily of Joe Reineke, Jeff Rouse, Nabil Ayers (drums), while guitarists Jason Krevey, Mike Squires and Mike Davis were also members of the band.

Jeff Rouse is an American musician who is best known as the bassist for both Alien Crime Syndicate and Duff McKagan's Loaded. In September 2014, it was announced Rouse was the newest member of Fozzy. Previously, Rouse was a member of a number of Seattle based groups such as Vendetta Red and Sirens Sister while he also has his own solo project titled To the Glorious Lonely.

James Montgomery is an American blues musician, best known as the lead singer, blues harp player, frontman, and bandleader of The James Montgomery Blues Band. Montgomery collaborates with many star performers and recording artists. He is also the past President of The New England Blues Society.

The Gentlemen was an American rock band from Seattle, Washington, formed in 1998. Formed by Duff McKagan, formerly of Guns N' Roses, the band's first lineup consisted of guitarists Michael Barragan, formerly of Plexi, and Dez Cadena, formerly of Black Flag, as well as drummer Taz Bentley, formerly of The Reverend Horton Heat. The same year, they adopted the Loaded moniker before disbanding.

Shelby Earl is an American singer-songwriter and musician based in Seattle, Washington. Earl's first solo album, Burn the Boats, was produced by John Roderick and released on Local 638 Records. In 2011 NPR's Ann Powers named Earl her "new favorite songwriter" and Amazon.com dubbed her album the "#1 Outstanding 2011 Album You Might Have Missed".

Kim Warnick is an American rock musician, a former member of Seattle-based bands The Fastbacks (1979–2002) and Visqueen (1998–2004). Described by KIRO-FM in 2016 as a "legendary musician and vocalist," she is the former wife of Ken Stringfellow of The Posies. Officially she retired in 2004, and suffered some serious health issues in the following years, but recovered and has participated in Fastbacks reunion shows, the first of which was in 2011, headlining the West Seattle Summer Fest.