After attending school Volker Rhoemheld studied chemical engineering at the Ohm Polytechnic in Nuremberg, followed by an appointment in the pharmaceutical firm Dr. R. Pfleger Chemie in Bamberg (1960-1964). He then absolved an apprenticeship in gardening in Kassel (assistant’s examination 1966) and went on to study horticulture at the Technical University of Berlin (1966-1970). He won a stipendium from the German National Academy and visited Leeds University to work in the Institute of Botany under Prof. H.W. Woolhouse on the theme: Iron uptake by various chlorosis-resistant ecotypes. After his return in 1972 he became a Scientific Assistant at the Institute for Plant Nutrition at the Technical University of Berlin, continued his research and obtained a Dr. sc. agr. degree in 1979 with a dissertation: Mechanisms of Uptake and Storage of Iron Chelates by higher plants. In 1979 he started as Scientific Assistant at the Institute for Plant Nutrition at University of Hohenheim. In 1988 he qualified as Lecturer in Plant Nutrition and in 1992 became Professor. From 1996 he was also Visiting Professor at China Agricultural University, Beijing, China. He retired in 2006. [2]

Regular referee for the following journals:

Nutrition is the science that interprets the nutrients and other substances in food in relation to maintenance, growth, reproduction, health and disease of an organism. It includes food intake, absorption, assimilation, biosynthesis, catabolism and excretion. 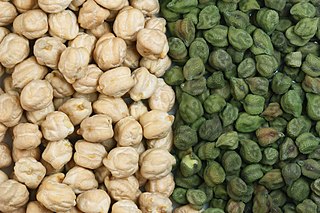 The chickpea or chick pea is an annual legume of the family Fabaceae, subfamily Faboideae. Its different types are variously known as gram or Bengal gram, garbanzo or garbanzo bean, Egyptian pea. Chickpea seeds are high in protein. It is one of the earliest cultivated legumes, and 7500-year-old remains have been found in the Middle East.

Agronomy is the science and technology of producing and using plants in agriculture for food, fuel, fiber, and land restoration. It is both a humanitarian career and a scientific one. Agronomy has come to encompass work in the areas of plant genetics, plant physiology, meteorology, and soil science. It is the application of a combination of sciences like biology, chemistry, economics, ecology, earth science, and genetics. Agronomists of today are involved with many issues, including producing food, creating healthier food, managing the environmental impact of agriculture, distribution of agriculture, and extracting energy from plants. Agronomists often specialise in areas such as crop rotation, irrigation and drainage, plant breeding, plant physiology, soil classification, soil fertility, weed control, and insect and pest control. 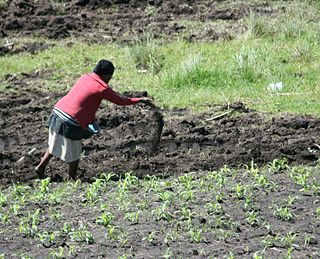 Plant nutrition is the study of the chemical elements and compounds necessary for plant growth, plant metabolism and their external supply. In its absence the plant is unable to complete a normal life cycle, or that the element is part of some essential plant constituent or metabolite. This is in accordance with Justus von Liebig's law of the minimum. The total essential plant nutrients include seventeen different elements: carbon, oxygen and hydrogen which are absorbed from the air, whereas other nutrients including nitrogen are typically obtained from the soil.

Micronutrients are essential elements required by organisms in varying quantities throughout life to orchestrate a range of physiological functions to maintain health. Micronutrient requirements differ between organisms; for example, humans and other animals require numerous vitamins and dietary minerals, whereas plants require specific minerals. For human nutrition, micronutrient requirements are in amounts generally less than 100 milligrams per day, whereas macronutrients are required in gram quantities daily.

Abdul Rashid,, is a Pakistani agricultural scientist, who has served as Member (Bio-sciences) of Pakistan Atomic Energy Commission (PAEC) from 2008 to 2011 and Director General of Pakistan's National Agricultural Research Center (NARC) from 2006 to 2008.

A Bioeffector is a viable microorganism or active natural compound which directly or indirectly affects plant performance (Biofertilizer), and thus has the potential to reduce fertilizer and pesticide use in crop production.

Torsten Müller is an agricultural scientist at the University of Hohenheim. He is chairman of the examination and admissions board of the European master's degree Course "Organic Agriculture and Food Systems" and Dean of Education of the Agricultural Science Faculty in Hohenheim.

Dennis Robert Hoagland was a plant scientist working in the fields of plant nutrition and physiology. He was Professor of Plant Nutrition at the University of California at Berkeley from 1927 until his death in 1949. He is commonly known especially for his pioneering work on hydroponics and the highly cited Hoagland solution. Dennis Robert Hoagland is the eponym of the prize named after him by the American Society of Plant Biologists, which was first awarded in 1985. 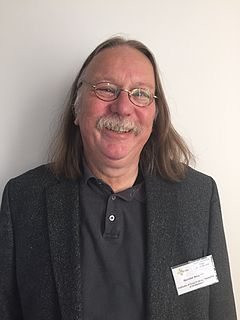 Guenter Neumann is an agricultural scientist at the University of Hohenheim. He is a plant physiologist specialising in rhizosphere research and scientific coordinator of the EU Research Project Biofector

Uwe Ludewig is a German agricultural scientist specialising in plant physiology. He is director of the Institute for Crop Science at the University of Hohenheim. 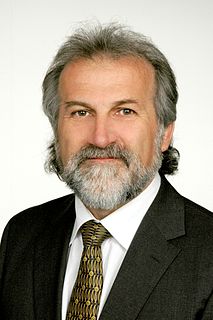 Pavel Tlustoš is a Czech agricultural chemist. From 2000-10 he was Vice Dean of the Faculty of Agricultural Biology, Food and Natural Resources of the Czech University of Life Sciences Prague (CULS), and 2010-February 2018 he was the Dean of the faculty. Since March 2018 he is again Vice Dean and responsible for international relations the faculty.

Markus Weinmann is an agricultural scientist specialising in the area of Plant Physiology at the University of Hohenheim, and ranks as one of the pioneers of Bioeffector-Research aimed at improving plant growth, vitality and disease resistance. He is also coordinator of field experiments in the EU-Biofector-Project.

Ellen Kandeler is a German biologist and agricultural scientist specialising in soil biology at University of Hohenheim. She also heads the Soil Biology area in the EU Biofector project.

Felix Dapare Dakora is a Ghanaian plant biologist investigating biological nitrogen fixation at the Tshwane University of Technology in South Africa. He currently serves as President of The African Academy of Sciences for the 2017-2020 term. Dakora was awarded the UNESCO-Equatorial Guinea International Prize for Research in the Life Sciences and the African Union Kwame Nkrumah Scientific Award. Dakora is a Fellow of the Academy of Science of South Africa.