Washington Kurdish Institute is an educational and research organization focused on Kurds. It was established in Washington DC in September 1996 by Dr. Najmaldin Karim, [1] Its objectives are raising awareness of Kurdish issues, promoting human rights in Kurdish areas and supporting development of civil society among Kurds. The institute has a Board of Directors headed by Dr. Najmaldin Karim. [2] It also has an advisory committee composed of renowned Kurdologists such as Martin van Bruinessen, Abbas Vali, Amir Hassanpour and Michael Chyet. The institute offers Kurdish language courses at beginner and advanced levels for both dialects of Sorani and Kurmanji [1] .

Martin van Bruinessen said in 2000 that the Washington Kurdish Institute was "playing an important role in political lobbying on behalf of the Kurds". [3]

Kurds or Kurdish people are an are an Iranic ethnic group native to a mountainous region of Western Asia known as Kurdistan, which spans southeastern Turkey, northwestern Iran, northern Iraq, and northern Syria. There are also exclaves of Kurds in Central Anatolia and Khorasan. Additionally, there are significant Kurdish diaspora communities in the cities of western Turkey, in particular Istanbul, while a Kurdish diaspora has developed in Western Europe, primarily in Germany. Numerically, the Kurds are estimated to number between 30 and 45 million. 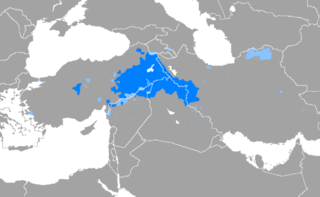 The Kurdish languages constitute a dialect continuum spoken by Kurds in Kurdistan and the Kurdish diaspora. The three Kurdish languages are Northern Kurdish, Central Kurdish, and Southern Kurdish. A separate group of non-Kurdish Northwestern Iranian languages, the Zaza–Gorani languages, are also spoken by several million ethnic Kurds. Studies as of 2009 estimate between 8 and 20 million native Kurdish speakers in Turkey. Kurdish consists of two standard written forms; Kurmanji and Sorani. The majority of the Kurds speak Kurmanji. 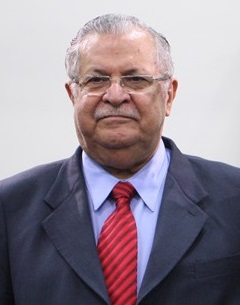 Jalal Talabani was an Iraqi Kurdish politician who served as the sixth President of Iraq from 2006 to 2014, as well as the President of the Governing Council of Iraq. He was the first non-Arab president of Iraq. He is known as Mam Jalal in the Middle East. The surname Talabani originates from the Arabic word 'طالب' (talib), meaning 'student' or 'scholar'.

Gorani or Hawrami is a language spoken by ethnic Kurds and which with Zazaki constitute the Zaza–Gorani languages. All the Gorani dialects are influenced by Kurdish lexically and morphologically. Gorani is considered a Kurdish dialect by many researchers.

Newroz or Nawroz is the celebration of the traditional Iranian peoples' New Year holiday of Nowruz in Kurdish culture. Before the Islamization of the Iranic peoples in Asia, some ancestors of the modern Kurds followed Zoroastrianism. In Zoroastrian doctrine, fire is a symbol of light, goodness and purification. Angra Mainyu, the demonic anti-thesis of Zoroastrianism, was defied by Zoroastrians with a big fire every year, which symbolized their defiance of and hatred for evil and the arch-demon. In Kurdish legend, the holiday celebrates the deliverance of the Kurds from a tyrant, and it is seen as another way of demonstrating support for the Kurdish cause. The celebration coincides with the March equinox which usually falls on 21 March and is usually held between 18 and 24 March. The festival has an important place in terms of Kurdish identity for the majority of Kurds, mostly in Iraq, Turkey and Syria. Though celebrations vary, people generally gather together to welcome the coming of spring; they wear coloured clothes and dance together.

Xoybûn or Khoyboun, was a nationalist organisation of Kurds that is known for leading the Ararat rebellion, commanded by Ihsan Nuri. Many Armenians joined the movement as well.

Kurds in Iran are the third largest ethnic group in Iran after Persians and Iranian Azerbaijanis, comprising about 10% of the country's population according to the CIA in 2014.

Turkish Kurdistan or Northern Kurdistan is the portion of Kurdistan under the jurisdiction of Turkey, located in the Eastern Anatolia and Southeastern Anatolia regions. Kurds form the predominant ethnic group.

Kurds in Turkey refers to people born in or residing in Turkey who are of Kurdish origin. The Kurds are the largest ethnic minority in Turkey. According to various estimates, they compose between 15% and 20% of the population of Turkey. Kurds live throughout Turkey, but are primarily concentrated in Turkish Kurdistan, in the southeast of Turkey.

İsmail Beşikçi is a Turkish sociologist, philosopher, revolutionary, and writer. He is a PEN Honorary Member. He has served 17 years in prison on propaganda charges stemming from his writings about the Kurdish population in Turkey. 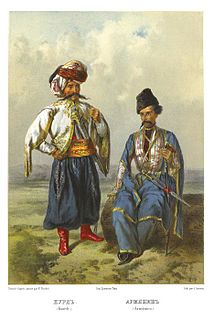 The Koçgiri Rebellion or Koçkiri Rebellion was an Alevi Kurdish uprising, in the overwhelmingly militant Koçgiri region. While waged by the Kızılbaş Koçgiri tribe, it was originally suggested by members of an organization known as the Society for the Rise of Kurdistan (SAK).

Kurdish rebellions in Turkey refer to Kurdish nationalist uprisings in Turkey, beginning with the Turkish War of Independence and the consequent transition from the Ottoman Empire into the modern Turkish state and lasting until present with the ongoing Kurdish-Turkish conflict.

The Dersim rebellion was an Alevi-Zaza uprising against the Turkish government in the Dersim region of eastern Turkey, which includes parts of Tunceli Province, Elazığ Province, and Bingöl Province. The rebellion was led by Seyid Riza, an Alevi-Zaza chieftain of the Yukarı Abbas Uşağı tribe. As a result of the Turkish Armed Forces campaign in 1937 and 1938 against the rebellion, thousands of Alevi-Zazas died and many others were internally displaced due to the conflict.

The Ararat rebellion, also known as the Ağrı rebellion, was an uprising amongst the Kurdish inhabitants of the province of Ağrı in eastern Turkey against the Turkish government that took place in 1930.

The Kurds as an ethnicity within the Northwestern Iranian group enter the historical record at the end of the seventh century.

Religious diversity has been a feature of Kurdistan for many centuries. Main religions that currently exist in Kurdistan are as follows: Islam, Christianity, Zoroastrianism, Yarsanism, Yazidism, Alevism, and Judaism. Today, Sunni Islam is the most adhered religion in Kurdistan.

Najmiddin Karim, born 1949, also known as Najmaldin Karim, is an Iraqi Kurdish politician who was governor of Kirkuk Governorate from 2011 to 2017. Prior to the invasion of Iraq, Karim had served in numerous Kurdish and Iraqi opposition groups.

The Deportations of Kurds by Turkey from 1916 to 1934 refers to the population transfer of hundreds of thousands of Kurds from Turkish Kurdistan that was perpetuated by the Ottoman Empire and its successor Turkey in order to Turkify the region. Most of the Kurds who were deported were forced to leave their autochthonous lands, but the deportations also included the forced sedentarization of Kurdish tribes. Turkish historian İsmail Beşikçi emphasized the influence of fascism on these policies, and Italian historian Giulio Sappeli argued: "The ideals of Kemal Atatürk meant that war against the Kurds was always seen as an historical mission aimed at affirming the superiority of being Turkish." Occurring just after the Armenian Genocide, many Kurds believed that they would share the same fate as the Armenians.