In light microscopy, a water immersion objective is a specially designed objective lens used to increase the resolution of the microscope. This is achieved by immersing both the lens and the specimen in water which has a higher refractive index than air, thereby increasing the numerical aperture of the objective lens.

In optical engineering, the objective is the optical element that gathers light from the object being observed and focuses the light rays to produce a real image. Objectives can be a single lens or mirror, or combinations of several optical elements. They are used in microscopes, telescopes, cameras, slide projectors, CD players and many other optical instruments. Objectives are also called object lenses, object glasses, or objective glasses. 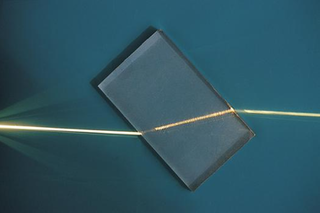 In optics, the refractive index or index of refraction of a material is a dimensionless number that describes how fast light propagates through the material. It is defined as

Water immersion objectives are used not only at very large magnifications that require high resolving power, but also of moderate power as there are water immersion objectives as low as 4X. Objectives with high power magnification have short focal lengths, facilitating the use of water. The water is applied to the specimen (conventional microscope), and the stage is raised, immersing the objective in water. Sometimes with water dipping objectives, the objective is directly immersed in the solution of water which contains the specimens to look at. Electrophoretic preparations used in the case of comet assay can benefit from the use of water objectives.

The single cell gel electrophoresis assay is an uncomplicated and sensitive technique for the detection of DNA damage at the level of the individual eukaryotic cell. It was first developed by Östling & Johansson in 1984 and later modified by Singh et al. in 1988. It has since increased in popularity as a standard technique for evaluation of DNA damage/repair, biomonitoring and genotoxicity testing. It involves the encapsulation of cells in a low-melting-point agarose suspension, lysis of the cells in neutral or alkaline (pH>13) conditions, and electrophoresis of the suspended lysed cells. The term "comet" refers to the pattern of DNA migration through the electrophoresis gel, which often resembles a comet.

The refractive index of the water (1.33) is closer to those of imaged materials or to the glass of the cover-slip, so more light will be collected/focused by this type of objective comparing to air-immersion ones, leading to a range of higher numerical apertures (NA). [1]

The optical microscope, often referred to as the light microscope, is a type of microscope that commonly uses visible light and a system of lenses to magnify images of small objects. Optical microscopes are the oldest design of microscope and were possibly invented in their present compound form in the 17th century. Basic optical microscopes can be very simple, although many complex designs aim to improve resolution and sample contrast. Often used in the classroom and at home unlike the electron microscope which is used for closer viewing.

In optics, an index-matching material is a substance, usually a liquid, cement (adhesive), or gel, which has an index of refraction that closely approximates that of another object.

In optics, the numerical aperture (NA) of an optical system is a dimensionless number that characterizes the range of angles over which the system can accept or emit light. By incorporating index of refraction in its definition, NA has the property that it is constant for a beam as it goes from one material to another, provided there is no refractive power at the interface. The exact definition of the term varies slightly between different areas of optics. Numerical aperture is commonly used in microscopy to describe the acceptance cone of an objective, and in fiber optics, in which it describes the range of angles within which light that is incident on the fiber will be transmitted along it. 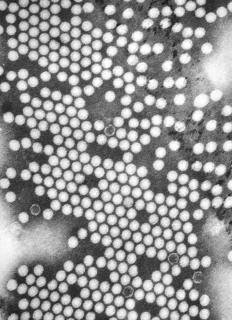 Transmission electron microscopy is a microscopy technique in which a beam of electrons is transmitted through a specimen to form an image. The specimen is most often an ultrathin section less than 100 nm thick or a suspension on a grid. An image is formed from the interaction of the electrons with the sample as the beam is transmitted through the specimen. The image is then magnified and focused onto an imaging device, such as a fluorescent screen, a layer of photographic film, or a sensor such as a scintillator attached to a charge-coupled device.

Angular resolution or spatial resolution describes the ability of any image-forming device such as an optical or radio telescope, a microscope, a camera, or an eye, to distinguish small details of an object, thereby making it a major determinant of image resolution. In physics and geosciences, the term spatial resolution refers to the precision of a measurement with respect to space. 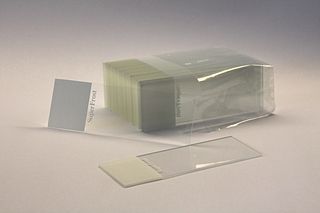 A microscope slide is a thin flat piece of glass, typically 75 by 26 mm and about 1 mm thick, used to hold objects for examination under a microscope. Typically the object is mounted (secured) on the slide, and then both are inserted together in the microscope for viewing. This arrangement allows several slide-mounted objects to be quickly inserted and removed from the microscope, labeled, transported, and stored in appropriate slide cases or folders etc. 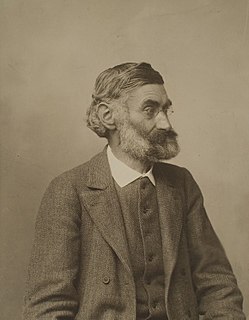 Ernst Karl Abbe HonFRMS was a German physicist, optical scientist, entrepreneur, and social reformer. Together with Otto Schott and Carl Zeiss, he laid the foundation of modern optics. Abbe developed numerous optical instruments. He was a co-owner of Carl Zeiss AG, a German manufacturer of research microscopes, astronomical telescopes, planetariums and other optical systems. 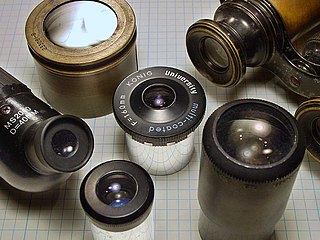 A solid immersion lens (SIL) has higher magnification and higher numerical aperture than common lenses by filling the object space with a high-refractive-index solid material. SIL was originally developed for enhancing the spatial resolution of optical microscopy. There are two types of SIL:

In light microscopy, oil immersion is a technique used to increase the resolving power of a microscope. This is achieved by immersing both the objective lens and the specimen in a transparent oil of high refractive index, thereby increasing the numerical aperture of the objective lens.

The stereo, stereoscopic or dissecting microscope is an optical microscope variant designed for low magnification observation of a sample, typically using light reflected from the surface of an object rather than transmitted through it. The instrument uses two separate optical paths with two objectives and eyepieces to provide slightly different viewing angles to the left and right eyes. This arrangement produces a three-dimensional visualization of the sample being examined. Stereomicroscopy overlaps macrophotography for recording and examining solid samples with complex surface topography, where a three-dimensional view is needed for analyzing the detail. 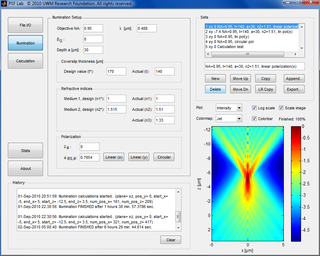 PSF Lab is a software program that allows the calculation of the illumination point spread function (PSF) of a confocal microscope under various imaging conditions. The calculation of the electric field vectors is based on a rigorous, vectorial model that takes polarization effects in the near-focus region and high numerical aperture microscope objectives into account.

A condenser is an optical lens which renders a divergent beam from a point source into a parallel or converging beam to illuminate an object.

Live cell imaging is the study of living cells using time-lapse microscopy. It is used by scientists to obtain a better understanding of biological function through the study of cellular dynamics. Live cell imaging was pioneered in first decade of the 20th century. One of the first time-lapse microcinematographic films of cells ever made was made by Julius Ries, showing the fertilization and development of the sea urchin egg. Since then, several microscopy methods have been developed which allow researchers to study living cells in greater detail with less effort. A newer type of imaging utilizing quantum dots have been used as they are shown to be more stable. The development of holotomographic microscopy has disregarded phototoxicity and other staining-derived disadvantages by implementing digital staining based on cells’ refractive index.