There is currently[ when? ] much work to determine what the coherence laws for weak n-categories should be. Weak n-categories have become the main object of study in higher category theory. There are basically two classes of theories: those in which the higher cells and higher compositions are realized algebraically (most remarkably Michael Batanin's theory of weak higher categories) and those in which more topological models are used (e.g. a higher category as a simplicial set satisfying some universality properties).

In mathematics, a bicategory is a concept in category theory used to extend the notion of category to handle the cases where the composition of morphisms is not (strictly) associative, but only associative up to an isomorphism. The notion was introduced in 1967 by Jean Bénabou. 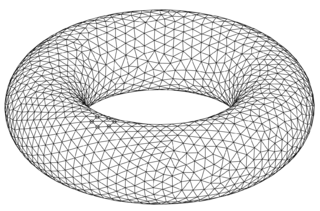 In mathematics, categorification is the process of replacing set-theoretic theorems with category-theoretic analogues. Categorification, when done successfully, replaces sets with categories, functions with functors, and equations with natural isomorphisms of functors satisfying additional properties. The term was coined by Louis Crane.

In category theory, a strict 2-category is a category with "morphisms between morphisms", that is, where each hom-set itself carries the structure of a category. It can be formally defined as a category enriched over Cat.

In mathematics, particularly in homotopy theory, a model category is a category with distinguished classes of morphisms ('arrows') called 'weak equivalences', 'fibrations' and 'cofibrations' satisfying certain axioms relating them. These abstract from the category of topological spaces or of chain complexes. The concept was introduced by Daniel G. Quillen (1967).

In category theory, a discipline in mathematics, the notion of topological category has a number of different, inequivalent definitions.

In algebraic K-theory, the K-theory of a categoryC is a sequence of abelian groups Ki(C) associated to it. If C is an abelian category, there is no need for extra data, but in general it only makes sense to speak of K-theory after specifying on C a structure of an exact category, or of a Waldhausen category, or of a dg-category, or possibly some other variants. Thus, there are several constructions of those groups, corresponding to various kinds of structures put on C. Traditionally, the K-theory of C is defined to be the result of a suitable construction, but in some contexts there are more conceptual definitions. For instance, the K-theory is a 'universal additive invariant' of dg-categories and small stable ∞-categories.

In category theory, a branch of mathematics, an opetope, a portmanteau of "operation" and "polytope", is a shape that captures higher-dimensional substitutions. It was introduced by John C. Baez and James Dolan so that they could define a weak n-category as a certain presheaf on the category of opetopes.