Last updated May 06, 2021
Mathematical statement of uniqueness, except for an equivalent structure (equivalence relation)

This figure of speech is mostly used in connection with expressions derived from equality, such as uniqueness or count. For example, x is unique up toR means that all objects x under consideration are in the same equivalence class with respect to the relation R.

Moreover, the equivalence relation R is often designated rather implicitly by a generating condition or transformation. For example, the statement "an integer's prime factorization is unique up to ordering" is a concise way to say that any two lists of prime factors of a given integer are equivalent with respect to the relation R that relates two lists if one can be obtained by reordering (permutation) from the other. [1] As another example, the statement "the solution to an indefinite integral is sin(x), up to addition by a constant" tacitly employs the equivalence relation R between functions, defined by fRg if f−g is a constant function, and means that the solution and the function sin(x) are equal up to this R. [2] In the picture, "there are 4 partitions up to rotation" means that the set P has 4 equivalence classes with respect to R defined by aRb if b can be obtained from a by rotation; one representative from each class is shown in the bottom left picture part.

Equivalence relations are often used to disregard possible differences of objects, so "up to R" can be understood informally as "ignoring the same subtleties as R does". In the factorization example, "up to ordering" means "ignoring the particular ordering".

Further examples include "up to isomorphism", "up to permutations", and "up to rotations", which are described in the Examples section.

In informal contexts, mathematicians often use the word modulo (or simply "mod") for similar purposes, as in "modulo isomorphism".

A simple example is "there are seven reflecting tetrominoes, up to rotations", which makes reference to the seven possible contiguous arrangements of tetrominoes (collections of four unit squares arranged to connect on at least one side) and which are frequently thought of as the seven Tetris pieces (O, I, L, J, T, S, Z). One could also say "there are five tetrominoes, up to reflections and rotations", which would then take into account the perspective that L and J (as well as S and Z) can be thought of as the same piece when reflected. The Tetris game does not allow reflections, so the former statement is likely to seem more relevant.

To add in the exhaustive count, there is no formal notation for the number of pieces of tetrominoes. However, it is common to write that "there are seven reflecting tetrominoes (= 19 total [3] ) up to rotations". Here, Tetris provides an excellent example, as one might simply count 7 pieces × 4 rotations as 28, but some pieces (such as the 2×2 O) obviously have fewer than four rotation states.

If, in addition to treating the queens as identical, rotations and reflections of the board were allowed, we would have only 12 distinct solutions up to symmetry and the naming of the queens, signifying that two arrangements that are symmetrical to each other are considered equivalent (for more, see Eight queens puzzle § Solutions).

The regular n-gon, for given n, is unique up to similarity. In other words, if all similar n-gons are considered instances of the same n-gon, then there is only one regular n-gon.

In group theory, one may have a group G acting on a set X, in which case, one might say that two elements of X are equivalent "up to the group action"—if they lie in the same orbit.

A hyperreal x and its standard part st(x) are equal up to an infinitesimal difference.

In computer science, the term up-to techniques is a precisely defined notion that refers to certain proof techniques for (weak) bisimulation, and to relate processes that only behave similarly up to unobservable steps. [4]

The eight queens puzzle is the problem of placing eight chess queens on an 8×8 chessboard so that no two queens threaten each other; thus, a solution requires that no two queens share the same row, column, or diagonal. The eight queens puzzle is an example of the more general n queens problem of placing n non-attacking queens on an n×n chessboard, for which solutions exist for all natural numbers n with the exception of n = 2 and n = 3.

In mathematics, a group is a set equipped with a binary operation that combines any two elements to form a third element in such a way that conditions called group axioms are satisfied, namely associativity, identity and invertibility. These conditions are familiar from many mathematical structures, such as number systems: for example, the integers endowed with the addition operation form a group. The formulation of the axioms is, however, detached from the concrete nature of the group and its operation. This allows one to handle entities of very different mathematical origins in a flexible way, while retaining essential structural aspects of many objects in abstract algebra and beyond. The ubiquity of groups in numerous areas—both within and outside mathematics—makes them a central organizing principle of contemporary mathematics.

In mathematics, equality is a relationship between two quantities or, more generally two mathematical expressions, asserting that the quantities have the same value, or that the expressions represent the same mathematical object. The equality between A and B is written A = B, and pronounced A equals B. The symbol "=" is called an "equals sign". Two objects that are not equal are said to be distinct.

In mathematics and logic, the term "uniqueness" refers to the property of being the one and only object satisfying a certain condition. This sort of quantification is known as uniqueness quantification or unique existential quantification, and is often denoted with the symbols "∃!" or "∃=1". For example, the formal statement

In mathematics, localization of a category consists of adding to a category inverse morphisms for some collection of morphisms, constraining them to become isomorphisms. This is formally similar to the process of localization of a ring; it in general makes objects isomorphic that were not so before. In homotopy theory, for example, there are many examples of mappings that are invertible up to homotopy; and so large classes of homotopy equivalent spaces. Calculus of fractions is another name for working in a localized category.

In mathematics, the term modulo is often used to assert that two distinct mathematical objects can be regarded as equivalent—if their difference is accounted for by an additional factor. It was initially introduced into mathematics in the context of modular arithmetic by Carl Friedrich Gauss in 1801. Since then, the term has gained many meanings—some exact and some imprecise. For the most part, the term often occurs in statements of the form: 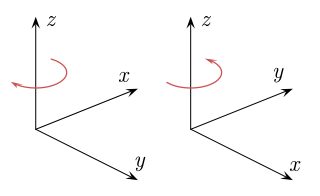 In mathematics, orientation is a geometric notion that in two dimensions allows one to say when a cycle goes around clockwise or counterclockwise, and in three dimensions when a figure is left-handed or right-handed. In linear algebra, the notion of orientation makes sense in arbitrary finite dimension. In this setting, the orientation of an ordered basis is a kind of asymmetry that makes a reflection impossible to replicate by means of a simple rotation. Thus, in three dimensions, it is impossible to make the left hand of a human figure into the right hand of the figure by applying a rotation alone, but it is possible to do so by reflecting the figure in a mirror. As a result, in the three-dimensional Euclidean space, the two possible basis orientations are called right-handed and left-handed.

Symmetry occurs not only in geometry, but also in other branches of mathematics. Symmetry is a type of invariance: the property that a mathematical object remains unchanged under a set of operations or transformations.

Sudoku puzzles can be studied mathematically to answer questions such as "How many filled Sudoku grids are there?", "What is the minimal number of clues in a valid puzzle?" and "In what ways can Sudoku grids be symmetric?" through the use of combinatorics and group theory.

In mathematics, the term essentially unique is used to describe a weaker form of uniqueness, where an object satisfying a property is "unique" only in the sense that all objects satisfying the property are equivalent to each other. The notion of essential uniqueness presupposes some form of "sameness", which is often formalized using an equivalence relation.

In mathematics, a canonical map, also called a natural map, is a map or morphism between objects that arises naturally from the definition or the construction of the objects. In general, it is the map which preserves the widest amount of structure, and it tends to be unique. In the rare cases where latitude in choices remains, the map is either conventionally agreed upon to be the most useful for further analysis, or sometimes the most elegant map known up to date.

In the mathematical field of order theory, an order isomorphism is a special kind of monotone function that constitutes a suitable notion of isomorphism for partially ordered sets (posets). Whenever two posets are order isomorphic, they can be considered to be "essentially the same" in the sense that either of the orders can be obtained from the other just by renaming of elements. Two strictly weaker notions that relate to order isomorphisms are order embeddings and Galois connections.