Wendell McKines (born August 18, 1988) is an American professional basketball player who last played for Maccabi Ra'anana of the Israeli National League. He is known for his moniker as Mr. Wednesday. [1]

Born in Oakland, California, McKines averaged 35.0 points, 15.0 rebounds and 3.4 blocks as a senior for Richmond High School, and led the RHS Oilers to a 22-9 finish and a North Coast Section Division II Championship in 2007. He is No. 6 on the all-time scoring list in California with 3,034 career points. He was named the San Francisco Chronicle Metro Area and Contra Costa Times Boys Player of the Year. He was also a first team all-state selection and Alameda/Contra Costa Athletic League Co-Most Valuable Player. ESPN listed him as the No. 22 small forward in the Class of 2007 while Scout.com placed him at the No. 37 power forward spot. Statistically, he ranked in the top 10 in four categories in California. He is No. 4 in career rebounds (1,523), No. 6 in career scoring average (30.3) and No. 9 in season-single scoring (1,080) in addition to the No. 6 position on the all-time scoring list, which includes the likes of Jason Kidd. He reached the 40-point or more plateau 11 times and scored over 50 points twice. [2] He committed to play for New Mexico State University in 2007. [3]

As a freshman, McKines played in all 35 games and started in 12 of them. He averaged 6.4 points and 5.9 rebounds per contest, which ranked fourth on the team. McKines shot 57.3 percent from the field and he recorded 27 assists, 14 blocks and 20 steals.

During his sophomore season, he increased his production, especially on the boards. He led the Western Athletic Conference (WAC) with 10.0 rebounds per game, which was No. 18 in the country. He collected 319 boards, a mark that ranked fifth on the school's single-season list. Offensively, he averaged 12.1 points per contest and shot 48.6 percent from the field and 38.5 from the 3-point line. He played in all 32 games and started in 27. He tallied 52 assists, 36 steals and 22 blocks, 16 double-doubles and led the team in rebounding on 28 occasions.

In his junior season, he started in 23 games for the Aggies, averaging 10.7 points and 9.8 rebounds per game, a team-best mark, en route to helping the Aggies to a WAC Tournament title and NCAA Tournament appearance. He shot 48.2 percent from the field, 37.2 percent from 3-point line and 56.5 percent at the free-throw line. He also had 74 assists, 17 blocks and 15 steals. He ranked first in the WAC in conference games with 9.8 rebounds per game. He also posted nine double-doubles (27 in his career), and was an honorable mention All-WAC selection.

Before the start of his senior season, he suffered a broken foot during practice and redshirted the entire 2010-2011 season. [4]

In his final season, he averaged 18.7 points and 10.7 rebounds per game, which led both the Aggies and WAC and was No. 8 in the NCAA in rebounds per game and No. 29 in points per game, while also shot 46.1 percent from field, 35.2 percent from 3-point line and 76.0 percent from free-throw line. He also posted 20 double-doubles as a senior, which ranked fifth in the nation, and totaled 47 career double-doubles as an Aggie. He was named the 2012 WAC Tournament Most Valuable Player after leading the Aggies to their second conference tournament title in three years and 19th NCAA Tournament berth. He earned National Association of Basketball Coaches (NABC) All-District Six team and U.S. Basketball Writers Association (USBWA) All-District VIII team honors. He became only the second member of the 1,000-career point and 1,000-career rebound club at NM State, and was only the second player in school history along with Sam Lacey, second active player in the NCAA and 12th player in WAC history to achieve the feat.

McKines went undrafted in the 2012 NBA draft making him an unrestricted free agent. [5] He then played in professional leagues overseas in France, Philippines, South Korea, and Israel. He recently suited up for the Rain or Shine Elasto Painters in the PBA. [6]

On July 4, 2015, he registered a career-high 53 points (18 in the fourth quarter), together with 17 boards, five assists, five blocks, and two steals in 43 minutes as he singlehandedly carried Rain or Shine to victory against San Miguel that tied their semifinal series with one game apiece. [7]

On November 3, 2019, McKines returned to Israel for a second stint, signing with Maccabi Ra'anana of the Israeli National League as an injury cover for Tyler Wideman. [8] On November 22, 2019, he parted ways with Ra'anana after appearing in three games. [9] 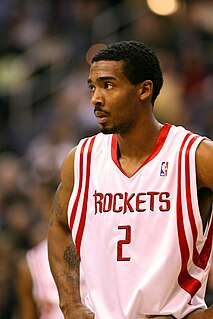 Antoine Domonick Wright is an American former professional basketball player who last played for Rain or Shine Elasto Painters of the Philippine Basketball Association (PBA). He attended preparatory school at Lawrence Academy at Groton; in 2002, he led the Spartans to an Independent School League Basketball Championship. After his junior year at Texas A&M University, he was selected 15th overall in the 2005 NBA Draft by the Nets, the highest pick from the Big 12 Conference that year and in Texas A&M University history until Acie Law was drafted 11th in the 2007 NBA Draft. Wright played his first five seasons of professional basketball in the NBA. He has since played overseas and in the NBA D-League.

The New Mexico Lobos men's basketball team represents the University of New Mexico, competing in the Mountain West Conference (MWC) in NCAA Division I. The university established basketball as a varsity sport in 1899 and began competing with regional colleges after establishing an athletics department in 1920.

Filiberto Rivera, also known as "Fili", is a Puerto Rican professional basketball player who plays for Santeros de Aguada of the BSN in Puerto Rico. Rivera has played in the NCAA, NJCAA and the Baloncesto Superior Nacional (BSN), and has also played internationally in Germany and Italy. He has been a member of the Puerto Rican National Team since 2006.

Joseph CostelloReshawn Jones is an American professional basketball player for Santeros de Aguada of the Baloncesto Superior Nacional. He played college basketball at Texas A&M (2004–2008). Jones married his wife in 2012 and they have two children together. 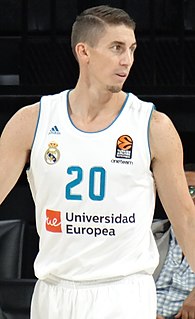 Jaycee Don Carroll is an Azerbaijani-American professional basketball player for Real Madrid. He also represents the senior Azerbaijani national team. While playing college basketball for the Utah State University Aggies, he was best known for his scoring prowess, shooting ability, shooting range, and endurance. He has the 2nd highest 3 point field goal percentage in NCAA Division I history. He is the Aggies' all-time scoring leader, and also holds 9 other school records. When he finished his college basketball career, he had the 14th most 3 pointers made, and 52nd most points scored in NCAA DI history.

Shawn Daniels is an American professional basketball player. He currently plays in the National Basketball League of Canada for the London Lightning basketball team.

JaJuan Johnson is an American professional basketball player for Bayern Munich of the Basketball Bundesliga (BBL) and the Euroleague. He played college basketball at Purdue University. During his sophomore season, he was named a first-team All-Big Ten selection. As a junior, he was named a second-team All-Big Ten selection. As a senior, a first-team consensus All-American as well as the Big Ten Player of the Year and Big Ten Defensive Player of the Year. 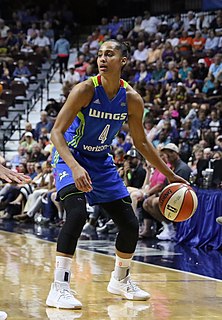 Skylar Kierra Diggins-Smith is an American professional basketball player for the Phoenix Mercury in the Women's National Basketball Association (WNBA). Diggins was drafted third overall by the Tulsa Shock in the 2013 WNBA draft. In high school, she was the National Gatorade Player of the Year, the Gatorade Female Athlete of the Year, and was also an all american in 2009 Diggins played point guard for Notre Dame, where she led Notre Dame to three consecutive Final Fours and two consecutive NCAA championship appearances. She finished her Notre Dame career ranked first in points and steals, second in assists, and as a two-time winner of the Nancy Lieberman Award as the top point guard in the nation.

The Radford Highlanders men's basketball represents Radford University in NCAA Division I intercollegiate men's basketball competition. A member of the Big South Conference, the current head coach is Mike Jones. The Highlanders play at the Dedmon Center, which has a capacity of 3,000. 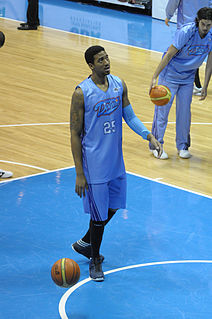 Magnum Rolle is a Bahamian professional basketball player who last played for the Nakhon Pathom Mad Goat of the Thailand Basketball League. Born in Freeport, Bahamas, Rolle did not play basketball until his freshman year of high school and was taught by his coach at St. George's High School, Darrel Sears. After his senior year at St. George's, Rolle transferred to the Laurinburg Institute in North Carolina, where he was an integral part in leading the team to an undefeated record and the national prep school championship. He was considered a five-star prospect out of Laurinburg, and committed to play at Louisiana State University (LSU). 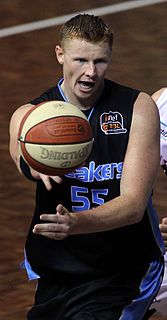 Tai William Evans Wesley is an American former professional basketball player. He played college basketball for the Utah State Aggies, where he was named the Western Athletic Conference Player of the Year in 2011. After beginning his career with successful stints in Europe, he made a name for himself in Australia and New Zealand, winning two Australian NBL championships and three New Zealand NBL championships. Wesley also represented the Guam national team on numerous occasions.

The 2004–05 Georgetown Hoyas men's basketball team represented Georgetown University in the 2004–2005 NCAA Division I basketball season. The Hoyas were coached by John Thompson III – his first year at Georgetown – and played their home games at the MCI Center in Washington, DC. The Hoyas are members of the Big East Conference. They finished the season 19–13, 8–8 in Big East play. They advanced to the quarterfinals of the 2005 Big East Men's Basketball Tournament before losing to Connecticut They played in the 2005 National Invitation Tournament and advanced to the quarterfinals before losing to South Carolina.

Amile O. Jefferson is an American professional basketball player for Galatasaray of the Turkish Basketball Super League (BSL). He played college basketball for the Duke Blue Devils and served as a captain for three seasons, including for the 2014–15 NCAA championship team. 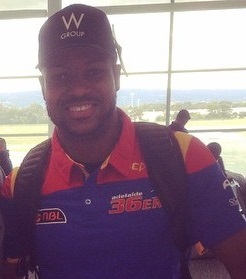 The 2008–09 New Mexico State Aggies men's basketball team represented New Mexico State University in the 2008–09 college basketball season. This was Marvin Menzies 2nd season as head coach. The Aggies played their home games at Pan American Center and competed in the Western Athletic Conference. They finished the season 17–15, 9–7 in WAC play. They lost in the 2nd round of the 2009 WAC Men's Basketball Tournament to end the season.

Rudy Dewayne Woods was an American professional basketball player. A tall and strong center, he was one of the top prospects in the 1978 high school class. He played 4 years of college basketball for the Texas A&M Aggies, and he was a 4th-round pick in the 1982 NBA Draft; however, he never played in the NBA and he had a 5-year career playing professional basketball in Europe and in the CBA.

Samuel Hoskins Merrill is an American professional basketball player for the Milwaukee Bucks of the National Basketball Association (NBA). He played college basketball for the Utah State Aggies. 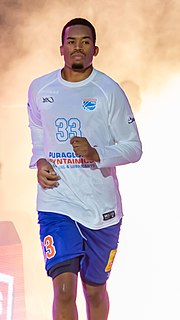 Cameron Jackson is an American professional basketball player for Benfica of the Portuguese Basketball League. He played college basketball for the Wofford Terriers.