Wespennest (literally translated "wasps nest") is a bi-annual literary magazine published in Austria. [1] It includes texts and images by authors and artists, presenting themes on specific countries, literature, art theory or politics, along with interviews, polemics, book and theatre reviews and works of photography on 112 pages.

The magazine was founded in 1969 and originally developed as a project by a group of authors from the Vienna 68er-Bewegung. The twenty-year-old writers Peter Henisch und Helmut Zenker initially founded Wespennest as a publication for their own texts, dissociated from the literary magazine Literatur und Kritik , which they found "too virtuous", and Manuskripte , which they found "too avant-garde". After the founding authors resigned, other writers including Gustav Ernst and Franz Schuh, worked as editors and co-publishers of Wespennest for many years. In the mid-1980s, Josef Haslinger altered the concept of the quarterly magazine. In addition to German-language literature and essays, it began to publish regular translations of foreign authors who were not well known in the German-speaking world. A collaboration was also formed with the European network of cultural journals Eurozine, which Wespennest helped to found.

Walter Famler, the magazine’s current publisher, expanded the magazine’s activities at the beginning of the 1990s to include book publishing, coming out with three to five books a year in the series Edition Literatur, Edition Essay and Edition Film. Founded as a literary magazine, Wespennest now includes works on the humanities and social sciences. It regularly publishes critical essays on topics of contemporary art and film, and coverage of political and social events in and outside Austria. The 100th issue, which appeared in September 1995, included further content and design changes by Stefan Fuhrer. Articles appear under the heading Wespennest Portraits, which has included articles on Drago Jančar, Dževad Karahasan, John Mateer and Meg Stuart. The articles aim to maintain a connection between photographs and text.

Four themed issues are published each year, with occasional special editions, such as those about the jazz composer Franz Koglmann, the poet Friederike Mayröcker and the Art Brut artist Adolf Wölfli.

The magazine was awarded the V.O. Stomps Prize from the city of Mainz in 2003, for "outstanding achievements in small-scale publishing activities".

Karl Kraus was an Austrian writer and journalist, known as a satirist, essayist, aphorist, playwright and poet. He directed his satire at the press, German culture, and German and Austrian politics. He was nominated for the Nobel Prize in Literature three times.

Austrian literature is mostly written in German, and is closely connected with German literature.

Franz Schuh is an Austrian novelist, literary critic and, above all, essayist in the tradition of Karl Kraus and Alfred Polgar. Schuh was born, and lives, in Vienna, where, just like his predecessors, he prefers to write in one of the traditional coffeehouses.

Ilija Trojanow is a Bulgarian–German writer, translator and publisher. 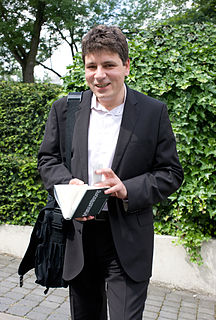 Eurozine is a network of European cultural magazines based in Vienna, linking up more than 90 partner journals and just as many associated magazines and institutions from nearly all European countries. Eurozine is also an online magazine which publishes original articles and selected articles from its partner journals with additional translations into one of the major European languages.

Carl Henrik Fredriksson is a Swedish literary critic, columnist, essayist, and translator living in Vienna, Austria. For fifteen years, until March 2015, he was the editor-in-chief of the European cultural journals network Eurozine, which he co-founded in 1998. Between 1998 and 2001, he was the editor-in-chief of Sweden's oldest cultural journal Ord&Bild, where he had worked as an editor since 1995. 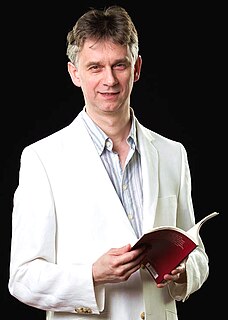 The Austrian Writers' Association has been founded in 1945 and was thus one of the first Austrian professional associations after World War II. The association fosters the communication between writers and the contact between authors and readers and is located in Vienna, Austria. Sidonia Gall is chairman of the OESV. 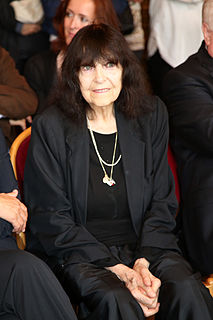 Friederike Mayröcker was an Austrian writer of poetry and prose, audio plays, children's books and dramatic texts. She experimented with language, and was regarded as an avantgarde poet, and as one of the leading authors in German. Her work, inspired by art, music, literature and everyday life, appeared as "novel and also dense text formations, often described as 'magical'." According to The New York Times, her work was "formally inventive, much of it exploiting the imaginative potential of language to capture the minutiae of daily life, the natural world, love and grief".

The Austrian literary magazine Literatur und Kritik was founded in April 1966 by the Austrian writers Rudolf Henz, Gerhard Fritsch, and Paul Kruntorad as successor of the literary publication Wort in der Zeit, which had existed since 1955.

Schreibkraft is an Austrian literary magazine, which was founded in 1998 by the Literature Council of the Forum Stadtpark in Graz (Styria). The magazine prints feature articles. Since 1999 the edition schreibkraft is the publisher. Schreibkraft appears twice a year.

Muschelhaufen is a German annual, originally combining literature and graphic arts. It was founded by Erik Martin from Viersen in 1969 and published - with an interruption of 11 years - until 2008, when the last issue came out.

Christian Ide Hintze was an Austrian poet and performance artist, who focused on the transition from literary to cross-media forms.

Ma is a Hungarian magazine connected with the Magyar Aktivizmus artistic group whose title not only reflects their initials but also means "today". It was founded in 1916 in Budapest by Lajos Kassák, who continued to publish it in exile in Vienna until 1925. 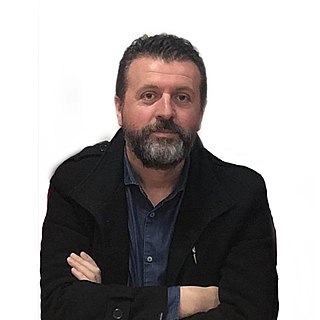 Ag Apolloni is an Albanian writer, poet, playwright, scholar and essayist. He is a professor at the University of Prishtina. His literary works are distinguished for their dramatic dimension, philosophical treatment and critical attitude towards history, politics and society.