Wilbur Chocolate is one of four brands manufactured by Cargill Cocoa & Chocolate North America. Most of the Wilbur brand products were produced in plants chocolate manufacturing company located in Lititz, Pennsylvania. Wilbur Chocolate was founded in Philadelphia in 1865 by Henry Oscar Wilbur and Samuel Croft. [1] Cargill Cocoa & Chocolate NA produces hundreds of millions of pounds of chocolate and confectionery products a year. These ingredients are sold to food and candy manufactures across the Americas. 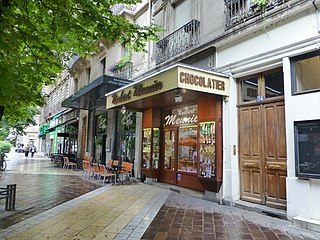 A chocolatier is a person or company who makes confectionery from chocolate. Chocolatiers are distinct from chocolate makers, who create chocolate from cacao beans and other ingredients. 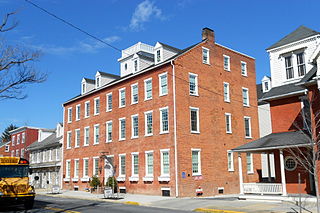 Lititz is a borough in Lancaster County, Pennsylvania, six miles north of the city of Lancaster. It is sometimes referred to as "Little Tits" or "Li'l Tits."

The company was bought by Cargill in 1992 [1] and is part of that company's cocoa and chocolate labels, which also includes Peter's Chocolate (bought from Nestlé in 2002 [1] ), Gerkens Cacao, and Veliche Belgian chocolate [2]

Cargill, Incorporated is an American privately held global corporation based in Minnetonka, Minnesota, and incorporated in Wilmington, Delaware. Founded in 1865, it is the largest privately held corporation in the United States in terms of revenue. If it were a public company, it would rank, as of 2015, number 15 on the Fortune 500, behind McKesson and ahead of AT&T. 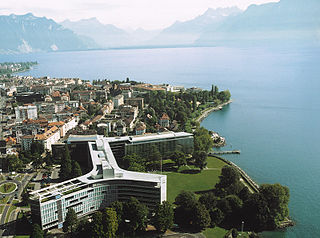 Nestlé S.A. is a Swiss multinational food and drink company headquartered in Vevey, Vaud, Switzerland. It is the largest food company in the world, measured by revenues and other metrics, since 2014. It ranked No. 64 on the Fortune Global 500 in 2017 and No. 33 on the 2016 edition of the Forbes Global 2000 list of largest public companies.

Cargill closed the Wilbur Chocolate Factory in early 2016. [3] By the summer of 2018 the former factory was being converted into condos. [4]

The company's Wilbur Chocolate Factory in Lititz sells an assortment of Wilbur chocolates and other candy, and features the free Candy Americana Museum that tells the history of the company and how their chocolate is made. The exhibits include antique chocolate molds, tins and boxes, as well as hand-painted European and Oriental antique porcelain chocolate pots. The museum was created by Penny Buzzard, wife of former Wilbur president John Buzzard, and opened in 1972. [5] 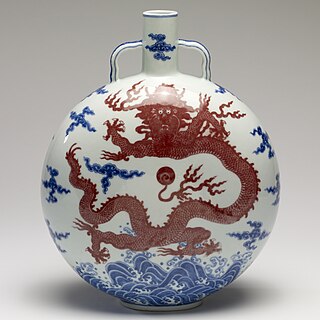 Porcelain is a ceramic material made by heating materials, generally including kaolin, in a kiln to temperatures between 1,200 and 1,400 °C. The toughness, strength, and translucence of porcelain, relative to other types of pottery, arises mainly from vitrification and the formation of the mineral mullite within the body at these high temperatures. Though definitions vary, porcelain can be divided into three main categories: hard-paste, soft-paste and bone china. The category that an object belongs to depends on the composition of the paste used to make the body of the porcelain object and the firing conditions.

On March 31, 2008, then Senator Barack Obama visited Wilbur Chocolate Company, drawing it into the national spotlight. [6] Mr. Obama greeted a sizable crowd outside before venturing inside to taste-test various treats offered to the calorie-conscious candidate. The hometown newspaper, the Lititz Record Express, documented his visit with a photo gallery.

In January, 2016, Cargill stopped chocolate production at this historic landmark and laid off approximately 130 Wilbur employees. This officially ended Wilbur's celebrated 125-year-old tradition of chocolate-making in at this site. [3] According to an announcement on October 29, 2015, Cargill would "close its plant in Lititz, Penn., on Broad Street and shift production of these offerings to Cargill’s other, more modern and efficient plants in Mount Joy, Lititz (West Lincoln Avenue) and Hazleton, Penn.; Milwaukee; and Ontario, Canada." [7]

Its most popular candy, the Wilbur Bud, was introduced in 1893. [8] The Hershey's Kiss which debuted in 1907, closely resembles a Wilbur Bud. The two products are also frequently compared due to the proximity of their manufacturers, Lititz being only about 20 miles (32 km) from the headquarters of The Hershey Company in Hershey, Pennsylvania. Wilbur Buds are not individually wrapped and have the word WILBUR on the bottom of the chocolate.

Cadbury, formerly Cadbury's and Cadbury Schweppes, is a British multinational confectionery company wholly owned by Mondelez International since 2010. It is the second largest confectionery brand in the world after Mars. Cadbury is internationally headquartered in Uxbridge, West London, and operates in more than 50 countries worldwide. It is known for its Dairy Milk chocolate, the Creme Egg and Roses selection box, and many other confectionery products. One of the best-known British brands, in 2013 The Daily Telegraph named Cadbury among Britain's most successful exports.

The Hershey Company, commonly called Hershey's, is an American company and one of the largest chocolate manufacturers in the world. It also manufactures baked products, such as cookies, cakes, milk shake, drinks and many more, which increase its variety of range. Its headquarters are in Hershey, Pennsylvania, which is also home to Hersheypark and Hershey's Chocolate World. It was founded by Milton S. Hershey in 1894 as the Hershey Chocolate Company, a subsidiary of his Lancaster Caramel Company. The Hershey Trust Company owns a minority stake, but retains a majority of the voting power within the company.

The Lancaster Caramel Company of Lancaster, Pennsylvania, was founded by Milton S. Hershey in 1886. It was Hershey's first successful candy company and helped him build a reputation.

Milton Snavely Hershey was an American chocolatier and philanthropist.

A chocolate bar is a chocolate confection in an oblong or rectangular form, which distinguishes it from bulk dark chocolate produced for commercial use or individually portioned chocolates such as pastilles, bonbons and truffles. In most of the English-speaking world, chocolate bar also refers to a typically snack-sized bar coated with or substantially consisting of chocolate but containing other ingredients. The first solid chocolate bar was produced by Fry's of Bristol, England in 1847, which was then mass-produced as Fry's Chocolate Cream in 1866.

Hershey is an unincorporated community and census-designated place (CDP) in Derry Township, Dauphin County, Pennsylvania, United States. Hershey's chocolates are made in Hershey, which was founded by candy magnate Milton S. Hershey.

Mars is an American global manufacturer of confectionery, pet food, and other food products and a provider of animal care services, with US$33 billion in annual sales in 2015. It was ranked as the 6th largest privately held company in the United States by Forbes. Headquartered in McLean, Virginia, United States, the company is entirely owned by the Mars family. Mars operates in five business segments around the world: Mars Wrigley Confectionary, Petcare, Food, Drinks, and Symbioscience, the company's life sciences division. 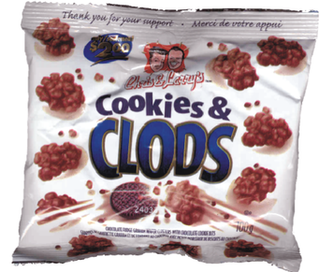 Clodhoppers are crunchy, fudge-covered graham clusters. They were originally marketed by the Kraves Candy Co., located in Winnipeg, Manitoba, Canada. In 2006, the brand and recipes were sold to Brookside Foods, who were in turn sold to Hershey's in 2011.

Milk Duds are a caramel candy, covered with a confectionery coating made from cocoa and vegetable oil. They are manufactured by The Hershey Company, and sold in a yellowish-orange box.

Harry Burnett "H. B." Reese was an American inventor and businessman known for creating the No. 1 selling candy brand in the United States, Reese's Peanut Butter Cups and founding the H.B. Reese Candy Company. In 2009, he was posthumously inducted into the Candy Hall of Fame.

Stollwerck GmbH is a German chocolate manufacturer. It was founded in 1839 and expanded internationally in Europe and America, becoming the second largest producer of chocolate in the United States by 1900. Since 2011 it has belonged to Belgian firm Baronie Group.

Whatchamacallit is a candy bar marketed in the United States by The Hershey Company.

Barry Callebaut is among the world's largest cocoa producers and grinders, with an average annual production of 1.7 million tonnes of cocoa. It was created in 1996 through the merging of the Belgian chocolate producer Callebaut and the French company Cacao Barry. It is currently based in Zürich, Switzerland, and operates in over 30 countries worldwide. It was created in its present form by Klaus Johann Jacobs.

The environmental effects of cocoa production 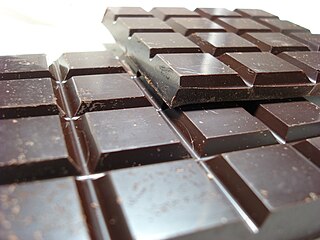