William "Bill" Yeager (born June 16, 1940, San Francisco) is an American engineer. He is best known for being the inventor of a packet-switched, "Ships in the Night," multiple-protocol router in 1981, during his 20-year tenure at Stanford's Knowledge Systems Laboratory as well as the Stanford University Computer Science department. [1] [2] The code routed Parc Universal Packet (PUP), XNS, IP and CHAOSNet. The router used Bill's Network Operating System (NOS). The NOS also supported the EtherTIPS that were used throughout the Stanford LAN for terminal access to both the LAN and the Internet. This code was licensed by Cisco Systems in 1987 and comprised the core of the first Cisco IOS. [3] This provided the groundwork for a new, global communications approach.

He is also known for his role in the creation of the IMAP mail protocol. In 1984 he conceived of a client/server protocol, designed its functionality, applied for and received the grant money for its implementation. In 1985 Mark Crispin was hired to work with Bill on what became the IMAP protocol. Along with Mark, who implemented the protocols details and wrote the first client, MMD, Bill wrote the first Unix IMAP server. Bill later implemented MacMM which was the first MacIntosh IMAP client. Frank Gilmurray assisted with the initial part of this implementation.

At Stanford in 1979 Bill wrote the ttyftp serial line file transfer program, which was developed into the MacIntosh version of the Kermit protocol at Columbia University. He was initially hired in August 1975 as a member of Dr. Elliott Levanthal's Instrumentation Research Laboratory. Here, Bill was responsible for a small computer laboratory for biomedical applications of mass spectrometry. This laboratory in conjunction with several chemists, and the Department of inherited rare diseases in the medical school made significant inroads in identifying inherited rare diseases from the gas chromatograph, mass spectrometer data generated from blood and urine samples of sick children. His significant accomplishment was to complete a prototype program initiated by Dr. R. Geoff Dromey [4] called CLEANUP. This program "extracted representative spectra from GC/MS data," [5] and was later used by the EPA to detect water pollutants.

From 1970 to 1975 he worked at NASA Ames Research Center where he wrote, as a part of the Pioneer 10/11 mission control operating system, both the telemetry monitoring and real time display of the images of Jupiter. After his stint at Stanford he worked for 10 years at Sun Microsystems.

At Sun as the CTO of Project JXTA he filed 40 US Patents, and along with Rita Yu Chen, designed and implemented the JXTA security solutions. In 2002 he along with Jeff Altman, then a contributor to the JXTA Open Source community, initiated the effort to establish the Internet Research Task Force (IRTF) Peer-to-Peer working group. The working group was created in 2003. Bill was the working group chair until 2005.

As Chief Scientist at Peerouette, Inc., he filed 2 US and 2 European Union Patents. He has so far been granted 20 US Patents 4 of which are on the SIMS High Performance Email Servers which he invented and with a small team of engineers implemented, and 16 on P2P and distributed computing. In the Summer of 1999 under the guidance of Greg Papadopoulos, Sun's CTO, and reporting directly to Carl Cargill, Sun's director of corporate standards, [6] led Sun's WAP Forum team with the major objective, "... to work with the WAP Forum on the convergence of the WAP protocol suite with IETF, W3C and Java standards." [7]

During this same period of time he invented the iPlanet Wireless Services. The latter was a Java proxy between IMAP Mail servers and either WAP Servers, or Web Browers. It proxied the following markup languages: The Handheld Device Markup Language, HDML, the Wireless Markup Language, WML, as well as HTML. This was a one person project supported by SFR/Cegetel in France. The primary goal was to enable email service to WAP phones.

In computing, the Post Office Protocol (POP) is an application-layer Internet standard protocol used by e-mail clients to retrieve e-mail from a mail server. POP version 3 (POP3) is the version in common use. 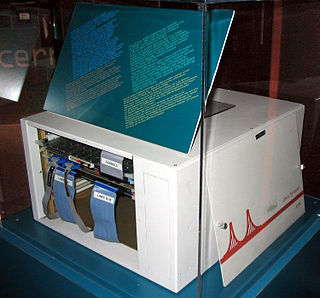 Border Gateway Protocol (BGP) is a standardized exterior gateway protocol designed to exchange routing and reachability information among autonomous systems (AS) on the Internet. BGP is classified as a path-vector routing protocol, and it makes routing decisions based on paths, network policies, or rule-sets configured by a network administrator.

Network File System (NFS) is a distributed file system protocol originally developed by Sun Microsystems (Sun) in 1984, allowing a user on a client computer to access files over a computer network much like local storage is accessed. NFS, like many other protocols, builds on the Open Network Computing Remote Procedure Call system. NFS is an open standard defined in a Request for Comments (RFC), allowing anyone to implement the protocol.

Cisco Systems, Inc. is an American multinational technology conglomerate headquartered in San Jose, California, in the center of Silicon Valley. Cisco develops, manufactures and sells networking hardware, software, telecommunications equipment and other high-technology services and products. Through its numerous acquired subsidiaries, such as OpenDNS, Webex, Jabber and Jasper, Cisco specializes in specific tech markets, such as the Internet of Things (IoT), domain security and energy management. On January 25, 2021, Cisco reincorporated in Delaware.

JXTA (Juxtapose) was an open-source peer-to-peer protocol specification begun by Sun Microsystems in 2001. The JXTA protocols were defined as a set of XML messages which allow any device connected to a network to exchange messages and collaborate independently of the underlying network topology.

This page provides an index of articles thought to be Internet or Web related topics.

Mark Reed Crispin is best known as the father of the IMAP protocol, having invented it in 1985 during his time at the Stanford Knowledge Systems Laboratory. He is the author or co-author of numerous RFCs and was the principal author of UW IMAP, one of the reference implementations of the IMAP4rev1 protocol described in RFC 3501. He also designed the MIX mail storage format.

Leonard X. Bosack is a co-founder of Cisco Systems, an American-based multinational corporation that designs and sells consumer electronics, networking and communications technology, and services. His net worth is approximately $200 million. He was awarded the Computer Entrepreneur Award in 2009 for co-founding Cisco Systems and pioneering and advancing the commercialization of routing technology and the profound changes this technology enabled in the computer industry.

Datagram Transport Layer Security (DTLS) is a communications protocol providing security to datagram-based applications by allowing them to communicate in a way designed to prevent eavesdropping, tampering, or message forgery. The DTLS protocol is based on the stream-oriented Transport Layer Security (TLS) protocol and is intended to provide similar security guarantees. The DTLS protocol datagram preserves the semantics of the underlying transport—the application does not suffer from the delays associated with stream protocols, but because it uses UDP or SCTP, the application has to deal with packet reordering, loss of datagram and data larger than the size of a datagram network packet. Because DTLS uses UDP or SCTP rather than TCP, it avoids the "TCP meltdown problem", when being used to create a VPN tunnel.

Wireless Application Protocol (WAP) is a technical standard for accessing information over a mobile wireless network. A WAP browser is a web browser for mobile devices such as mobile phones that use the protocol. Introduced in 1999, WAP achieved some popularity in the early 2000s, but by the 2010s it had been largely superseded by more modern standards. Almost all modern handset internet browsers now fully support HTML, so they do not need to use WAP markup for web page compatibility, and therefore, most are no longer able to render and display pages written in WML, WAP's markup language.

Multi-link trunking (MLT) is a link aggregation technology developed at Nortel in 1999. It allows grouping several physical Ethernet links into one logical Ethernet link to provide fault-tolerance and high-speed links between routers, switches, and servers.

Joseph Noel Chiappa is an Internet pioneer. He is a US resident and a retired researcher working in the area of information systems architecture and software, principally computer networks.