Worcester Memorial Auditorium (also known simply as "the Aud") is a multi-purpose arena located at Lincoln Square in Worcester, Massachusetts. It was built in 1933 to honor the sacrifices of Worcester citizens during times of war. The building includes a multi-purpose auditorium originally designed to seat 3,500-4,500 people, a smaller entertainment space known as the Little Theater designed to seat 675, and the Shrine of the Immortal, a war memorial with murals by renowned artist Leon Kroll commemorating the 355 soldiers and nurses from Worcester who fell during World War I. [1] [2] The Aud was added to the National Register of Historic Places in 1980 as part of the Institutional District. [3] In 2009, Preservation Massachusetts included Lincoln Square on its "Most Endangered Historic Resources" list, because the square's three historic buildings - the Aud, the old Worcester County Courthouse, and the Lincoln Square Boys Club - were all empty or underutilized. [1] [4]

In 2016, the City of Worcester engaged the Boston-based Architectural Heritage Foundation (AHF) to conduct a feasibility study of the Aud. AHF submitted its final report in February 2019, which recommended that the building become a center for digital innovation, entertainment, entrepreneurship, and the arts. Discussions between AHF and the City are ongoing. [6]

The Aud was designed by Frederic C. Hirons of New York and L.W. Briggs Company of Worcester in the Classical Revival style, with an Art Deco-inspired interior and bas-relief ornamentation. [7] It was constructed of Deer Island granite, Indiana limestone, and marble. Fronting Lincoln Square are five large bronze doors and eight monumental Doric columns, above which is inscribed, "To honor the services in war of her sons and daughters and to nourish in peace their spirit of sacrifice, a grateful city erected this building." The Aud is five stories high and contains five architectural zones: the auditorium (which contains a proscenium 116 feet wide [1] ), the Shrine of the Immortal war memorial, the Little Theater, the north and south-wing chambers, and the basement. [6]

Artist Leon Kroll created the Shrine of the Immortal murals, which took three years to complete between 1938 and 1941. [1] [8] Two depict U.S. Army and Navy soldiers in scenes of combat during WWI, while the third and largest depicts a soldier ascending to Heaven surrounded by "people of all classes and races gathered in peace and harmony under the American flag." [6] When completed, this mural was the largest of its kind in the United States. [9]

In 1933, a Kimball pipe organ containing 6,853 pipes was installed in the auditorium. The console sits on a hydraulic elevator, which historically enabled the console to be raised or lowered between the stage, the auditorium floor, and one level below. Though the organ has never been altered, it is still in working condition. [10]

At the end of World War I, Worcester's leading citizens decided to construct a public auditorium to commemorate the 355 local residents who lost their lives during the conflict, and more generally to honor the sacrifices of Worcester residents in times of war. It took more than a decade to secure land for the building. When the original plans to construct an auditorium on the Common fell through, the present location at Lincoln Square was selected instead. Construction began in 1931 and was completed in 1933 at a cost of $2 million. A dedication ceremony took place on September 26, 1933, during which the Aud was declared "an enduring tribute to those whose sacrifice was sublime, a majestic memorial for the use and benefit of many generations." [6]

Throughout the twentieth century, the Aud served as the center of Worcester's civic and cultural life. Concerts, basketball games, high school and college graduations, fundraisers, and election day polling all took place in the main hall. Before the Hart Center opened in 1975, the building was home to both the Bay State Bombardiers of the Continental Basketball Association and the Holy Cross Crusaders, whose young star, Bob Cousy, played often on the auditorium court. The hall hosted Bob Dylan's Rolling Thunder Revue as well as many other performers, including Louis Armstrong, B.B. King, the Rolling Stones, and Phish. [11] The Aud even served as a shelter after the Worcester tornado hit. [9]

With the construction of modern athletics and performance venues in Worcester, the Aud ceased to be a vital cultural center. At the turn of the twenty-first century, the basement was used briefly as a juvenile court, and the auditorium as storage for Massachusetts State Trial Court records, but the rest of the building fell into disrepair. The Aud has been vacant since 2008. Occasional organ performances took place through 2016, until a burst pipe the following winter caused significant damage to the auditorium floor and rendered the space unfit for public use. The building is now used for S.W.A.T. training. [1] [10]

In May 2019, the Worcester Telegram & Gazette revealed that the City of Worcester had authorized the sale of the Aud to the Architectural Heritage Foundation (AHF). Under the pending agreement, AHF would purchase the property for $450,000 by June 2021 and subsequently undertake a $94 million project to redevelop the building as an educational and cultural center connected to the digital economy. These plans include the preservation of the exterior facades, Shrine of the Immortal murals, Kimball pipe organ, and lobby. The auditorium would be outfitted for competitive gaming, esports competitions, and performances; the Little Theatre converted into an IMAX-style venue suitable for entertainment and educational events by local institutions; the memorial hall rehabilitated as a high-quality restaurant; and the other interior spaces redeveloped as digital innovation labs, green rooms, game rooms, lounges, and offices. The agreement follows a two-year feasibility study by AHF. [12]

Previous ideas for Aud included the relocation of the Higgins Armory building, the creation of a Faneuil Hall-style marketplace, and the establishment of a research center that would have been proximate to Worcester Polytechnic Institute's Gateway Park. [1] Calls to demolish the building also failed to gain traction. [1]

In 2018, the Aud was transformed into a bank for the Liam Neeson film Honest Thief. [14]

Worcester is a city in, and county seat of, Worcester County, Massachusetts, United States. Named after Worcester, Worcestershire, England, as of the 2010 Census the city's population was 181,045, making it the second-most populous city in New England after Boston. Worcester is approximately 40 miles (64 km) west of Boston, 50 miles (80 km) east of Springfield and 40 miles (64 km) north of Providence. Due to its location near the geographic center of Massachusetts, Worcester is known as the "Heart of the Commonwealth;" a heart is the official symbol of the city.

The Metropolitan United Methodist Church is a church located at 8000 Woodward Avenue in the New Center area of Detroit, Michigan. It was completed in 1926, listed on the National Register of Historic Places in 1982, and designated a Michigan State Historic Site in 1986. This church should not be confused with Metropolitan United Methodist Church in Washington, DC, which is often regarded as a National Church within the United States as it was specifically established by the General Conference to be a "representative presence of Methodism in the nation's capital".

Leon Kroll was an American painter and lithographer. A figurative artist described by Life magazine as "the dean of U.S. nude painters", he was also a landscape painter and also produced an exceptional body of still life compositions. His public art includes murals for the Department of Justice Building in Washington, D.C. He created his only mosaic for the chapel ceiling at Normandy American Cemetery and Memorial.

The Hanover Theatre for the Performing Arts in Worcester, Massachusetts, United States was originally built in 1904 as the Franklin Square Theatre regularly scheduling burlesque shows, Broadway touring shows and headline acts transitioning to showing silent films by 1912 when vaudeville magnate Sylvester Poli purchased the theatre from the estate of Pauline L. Taylor.

The Institutional District of Worcester, Massachusetts is an historic district encompassing a significant concentration of civic and municipal buildings north of the city's downtown area. It is centered on Lincoln Square and Wheaton Square, and includes properties on Main, Salisbury, and Tuckerman Streets. It includes the 1840s Worcester County Courthouse, the War Memorial and Memorial Auditorium, and the former Worcester Historical Society building at 39 Salisbury Street. The 1897 Worcester Art Museum is included in the district, as is the c. 1890 armory building at 44 Salisbury Street. The district was listed on the National Register of Historic Places in 1980.

Ford Auditorium was an auditorium in Detroit, Michigan that was built in 1955 and opened in 1956. Located on the Detroit riverfront, it served as a home to the Detroit Symphony Orchestra (DSO) for more than 33 years and was an integral part of the city's Civic Center. With approval from Ford and the city, the building was demolished in July 2011 as part of the city's waterfront redesign plans.

The Soldiers and Sailors Memorial Coliseum is a multi-purpose auditorium and meeting space in downtown Evansville, Indiana. 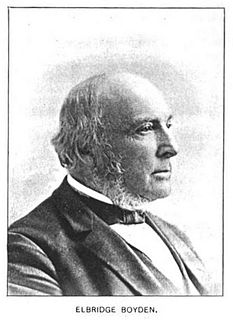 The Worcester Palladium, also known as The Palladium or Palladium Theatre, is an all-ages concert hall and performance venue located in Worcester, Massachusetts. The Palladium was designed by architect Arlan W. Johnson and opened as a theatre in 1928 as the Plymouth Theatre. It has a seating capacity of 2,160 in the Main Room and 500 in the upstairs room and is a popular venue for rock and metal bands.

Henry M. Francis (1836-1908), often known as H. M. Francis, was an architect in Massachusetts. A number of his works, alone or with sons, are listed on the United States National Register of Historic Places. His finest work may be the Murdock School in Winchendon, Massachusetts, built in 1887. 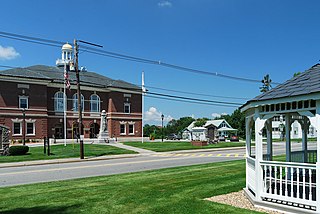 S. Wesley Haynes (1892–1983) was an American architect from Massachusetts.

Amos Porter Cutting (1839–1896) was an American architect from Worcester, Massachusetts.

Cutting, Carleton & Cutting was an American architectural firm, with offices in Worcester, Massachusetts, active from 1895 to 1932.

The equestrian statue of Charles Devens is a public monument in Worcester, Massachusetts, United States. Located in front of the old Worcester County Courthouse in the Institutional District, the equestrian statue honors Charles Devens, who served as a general in the Union Army during the American Civil War and later served as United States Attorney General. The statue was designed by Daniel Chester French and Edward Clark Potter and was dedicated on July 4, 1906. 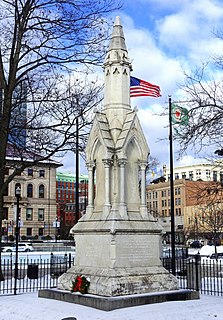 The Bigelow Monument is a public monument in Worcester, Massachusetts, United States. The monument, located in a small cemetery at the center of Worcester Common, honors Timothy Bigelow, a Patriot during the American Revolutionary War. The monument was dedicated on April 19, 1861, the 86th anniversary of the start of the war.