Wordless picture books, according to Arizona State University professor Frank Serafini, have "visually rendered narratives". [1] The narrative can use elements of graphic novels such as gutters and panels. [1] The narrative can also be expressed through full-page illustrations, with the story advanced by turning the page. [1] With this kind of book, the reader participates in creating the narrative. The reader must interpret the character's actions, feelings, and motivations without text to affirm; understand some ambiguity in the narrative may remain; and create and explain hypothesis about the events of the book. [1]

Wordless picture books will frequently have text containing metadata about the book, such as its title, illustrator, and copyright notice, and can also contain incidental text such as signs. [1] Some of these books will also contain dialogue, onomatopoeia and as a framing device to begin or end the story. [1] In the words of Serafini, "sparse written text that may be included there is there to support the visual images, anchor the narrative sequence, and call attention to various aspects of the visual narrative." [1]

Because of the reader participation in the wordless picture book these stores can offer benefits for emerging readers. [1] These kinds of books can be stepping stones for readers to graphic novels and other non-traditional texts. [1] These can also be used with older students for teaching around inferencing and helping students to make explicit implicit understandings. [1] [3] This kind of work can also be useful with English-language learners as it lets them improve their spoken language proficiency with texts more complex than they would be able to read in English. [3] [4] Wordless picture books can also be used as writing prompts, with students providing their own narration or dialogue. [2] These books may also be useful for expanding cultural knowledge and understanding. [2]

The Randolph Caldecott Medal annually recognizes the preceding year's "most distinguished American picture book for children", beginning with 1937 publications. It is awarded to the illustrator by the Association for Library Service to Children (ALSC), a division of the American Library Association (ALA). The Caldecott and Newbery Medals are the most prestigious American children's book awards. 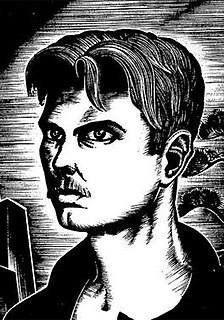 Lynd Kendall Ward was an American artist and storyteller, known for his series of wordless novels using wood engraving, and his illustrations for juvenile and adult books. His wordless novels have influenced the development of the graphic novel. Strongly associated with his wood engravings, he also worked in watercolor, oil, brush and ink, lithography and mezzotint. Ward was a son of Methodist minister and political organizer Harry F. Ward.

Postmodern picture books are a specific genre of picture books. Characteristics of this unique type of book include non-linear narrative forms in storybooks, books that are "aware" of themselves as books and include self-referential elements, and what is known as metafiction. 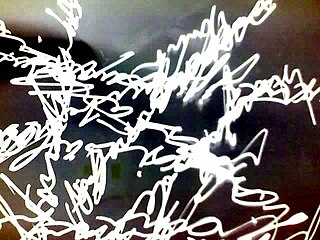 Asemic writing is a wordless open semantic form of writing. The word asemic means "having no specific semantic content", or "without the smallest unit of meaning". With the non-specificity of asemic writing there comes a vacuum of meaning, which is left for the reader to fill in and interpret. All of this is similar to the way one would deduce meaning from an abstract work of art. Where asemic writing distinguishes itself among traditions of abstract art is in the asemic author's use of gestural constraint, and the retention of physical characteristics of writing such as lines and symbols. Asemic writing is a hybrid art form that fuses text and image into a unity, and then sets it free to arbitrary subjective interpretations. It may be compared to free writing or writing for its own sake, instead of writing to produce verbal context. The open nature of asemic works allows for meaning to occur across linguistic understanding; an asemic text may be "read" in a similar fashion regardless of the reader's natural language. Multiple meanings for the same symbolism are another possibility for an asemic work, that is, asemic writing can be polysemantic or have zero meaning, infinite meanings, or its meaning can evolve over time. Asemic works leave for the reader to decide how to translate and explore an asemic text; in this sense, the reader becomes co-creator of the asemic work.

Rhetorical modes describe the variety, conventions, and purposes of the major kinds of language-based communication, particularly writing and speaking. Four of the most common rhetorical modes and their purpose are: narration, description, exposition, and argumentation. The first codification of these rhetorical modes was by Samuel P. Newman in A Practical System of Rhetoric in 1827.

Black and White is a 1990 postmodern picture book by David Macaulay. Published by Houghton Mifflin, it received mixed reviews upon its release but was the recipient of the Caldecott Medal for illustration in 1991. The book tells four overlapping stories, each drawn with a distinct visual style. The four stories are "Seeing things", about a boy on a train trip by himself, "Problem parents", about siblings whose parents behave differently one night, "A Waiting Game", about people waiting for a train, and "Udder Chaos", about cows who escape and then return to their field.

The use of comics in education is based on the concept of creating engagement and motivation for students. 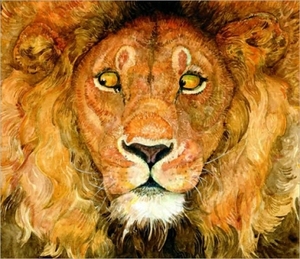 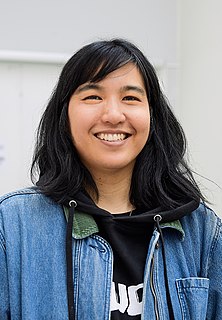 Jillian Tamaki is a Canadian American illustrator and comics artist known for her work in The New York Times and The New Yorker and for the graphic novels Boundless, as well as Skim and This One Summer written by her cousin Mariko Tamaki.

Comics has developed specialized terminology. Several attempts have been made to formalise and define the terminology of comics by authors such as Will Eisner, Scott McCloud, R. C. Harvey and Dylan Horrocks. Much of the terminology in English is under dispute, so this page will list and describe the most common terms used in comics.

He Done Her Wrong is a wordless novel written by American cartoonist Milt Gross and published in 1930. It was not as successful as some of Gross's earlier works, notably his book Nize Baby (1926) based on his newspaper comic strips. He Done Her Wrong has been reprinted in recent years and is now recognized as a comic parody of other similar wordless novels of the early 20th century, as well as an important precursor to the modern graphic novel.

The wordless novel is a narrative genre that uses sequences of captionless pictures to tell a story. As artists have often made such books using woodcut and other relief printing techniques, the terms woodcut novel or novel in woodcuts are also used. The genre flourished primarily in the 1920s and 1930s and was most popular in Germany. 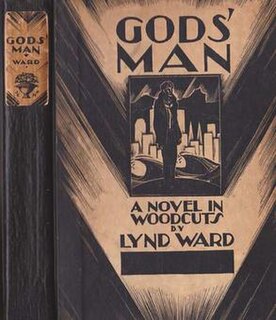 Gods' Man is a wordless novel by American artist Lynd Ward (1905–1985) published in 1929. In 139 captionless woodblock prints, it tells the Faustian story of an artist who signs away his soul for a magic paintbrush. Gods' Man was the first American wordless novel, and is considered a precursor of the graphic novel, whose development it influenced. 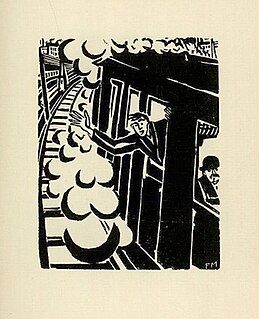 Passionate Journey, or My Book of Hours, is a wordless novel of 1919 by Flemish artist Frans Masereel. The story is told in 167 captionless prints, and is the longest and best-selling of the wordless novels Masereel made. It tells of the experiences of an early 20th-century everyman in a modern city. 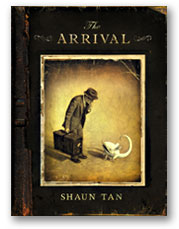 The Arrival by Shaun Tan is a wordless "graphic novel" published by Hodder Children's Books in 2006. The book is 128 pages long and divided into six chapters; it is composed of small, medium, and large panels, and often features pages of full artwork. It features an immigrant's life in an imaginary world that sometimes vaguely resembles our own. Without the use of dialogue or text, Shaun Tan portrays the experience of a father emigrating to a new land. Tan differentiates The Arrival from children's picture books, explaining that there's more emphasis on continuity in texts with multiple frames and panels, and that a "graphic novel" text like his more closely resembles a film making process. Shaun Tan has said he wanted his book to build a kind of empathy in readers: "In Australia, people don't stop to imagine what it's like for some of these refugees. They just see them as a problem once they're here, without thinking about the bigger picture. I don't expect the book to change anybody's opinion about things, but if it at least makes them pause to think, I'll feel as if I've succeeded in something."

Madman's Drum is a wordless novel by American artist Lynd Ward (1905–1985), published in 1930. It is the second of Ward's six wordless novels. The 118 wood-engraved images of Madman's Drum tell the story of a slave trader who steals a demon-faced drum from an African he murders, and the consequences for him and his family. 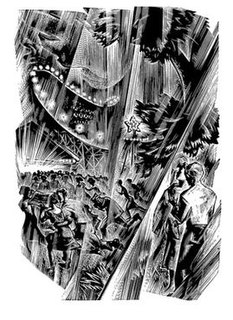 Vertigo is a wordless novel by American artist Lynd Ward (1905–1985), published in 1937. In three intertwining parts, the story tells of the effects the Great Depression has on the lives of an elderly industrialist and a young man and woman. Considered his masterpiece, Ward uses the work to express the socialist sympathies of his upbringing; he aimed to present what he called "impersonal social forces" by depicting the individuals whose actions are responsible for those forces.

The Tale of Custard the Dragon is a poem for children written by Ogden Nash. A picture book of the 1936 poem with illustrations by Lynn M. Munsinger was published in 1995.

The hybrid novel is a form of fiction, characterized by reaching beyond the limits of the anticipated medium through the incorporation of varying storytelling methods, such as poetry, photography, collage, maps, diagrams, and posters. The hybrid novel refers to a broad spectrum of literary work such as the graphic narrative and fusion texts.