Last updated July 01, 2021
Chilean footballer (born 1984)
In this Spanish name, the first or paternal surname is Opazoand the second or maternal family name is Riquelme.

Opazo began his career at Chilean club, Universidad de Chile. After of play many years in the youth teams of this club, he was promoted to the first team in January 2005 and then was loaned to Deportes La Serena in June of that year. With the 'papayas', he was a key player in the starting XI, so that did reach the semi-finals against Universidad Católica, thanks to the good performance of the team.

For the next season, Opazo returned to Universidad de Chile, but he was on many occasions at the bench, because the experimentates players Waldo Ponce and Julio Moreyra played in his position as frequency players in the team's lineup. In the 2006 Clausura, second semestral tournament, Opazo scored his first competitive goal in his career, in a 2–0 win over Santiago Wanderers on 22 October, scoring the first goal of the game at 14th minute. [1] In 2007, he had an opaque moment in his career and his life, he only played 3 games for the Apertura tournament and protagonizated a scandal with his team-mate Mauricio Pinilla at a disco, being fired the next day Pinilla and Opazo by the coach Jorge Socías. [2]

After one semester without football activity, Opazo was signed by Deportes La Serena, club in where completed a good season in the Clausura 2005 tournament. On 26 January 2008, he made his club debut for a league game against Audax Italiano in a 0–0 away draw at Estadio Monumental. He completed a good season at Serena, playing all games of his club and contributing much at the scheme of the coach Víctor Hugo Castañeda. Because his performance, this made that Yerson would have a chance of be transferred to Colo-Colo, rival of his former club Universidad de Chile.

On 31 December 2008, it was confirmed that Opazo joined Colo-Colo for play the national tournament and the 2009 Copa Libertadores. [3] However, he suffered an injury that made miss to the player the first games of the season, Yerson including only played 7 games in his stady, being after fired by the coach Hugo Tocalli.

In 2012, Opazo was runner-up with O'Higgins, after lose the final against Universidad de Chile in the penalty shoot-out, and he was selected as the best right back of the tournament and the year.

He participated with the club in the 2014 Copa Libertadores where they faced Deportivo Cali, Cerro Porteño and Lanús, being third and being eliminated in the group stage. In the tournament, Opazo scored two goals, both against Deportivo Cali. [5]

Mariano Esteban Uglessich is a retired Argentine footballer who played as a defender.

O'Higgins Fútbol Club, also known as O'Higgins de Rancagua, is a Chilean football club based in Rancagua, that is a current member of the Campeonato Nacional. The club's home stadium is the Estadio El Teniente, opened in 1945 and renovated for the 2015 Copa América, which was hosted by Chile. 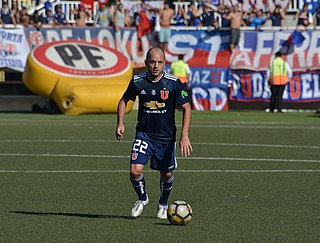 Luis Pedro Figueroa Sepúlveda(born May 14, 1983) is a Chilean footballer currently playing for Coquimbo Unido in the Primera B de Chile as a midfielder.

Braulio Antonio Leal Salvo is a Chilean footballer who plays in Deportes Magallanes as a midfielder.

Paulo Andrés Garcés Contreras is a Chilean footballer who last played for Primera B club San Luis de Quillota as a goalkeeper. 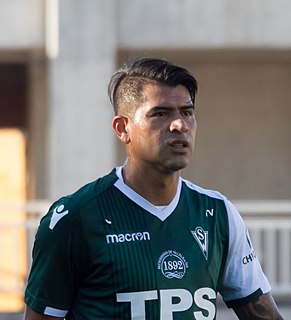 Enzo Hernán Gutiérrez Lencinas is an Argentine professional footballer who plays for Peruvian club Universitario de Deportes as a forward.

Roberto Órdenes was a Chilean footballer who played as Midfielder.

Benjamín Fernando Vidal Allende is a Chilean professional footballer who plays for Coquimbo Unido as a centre back.

Eduardo Alejandro López is an Argentine footballer who plays as a left back and currently is a Rivadavia de Lincoln in Torneo Federal A.

Osmán Huerta is a Chilean footballer as a striker. 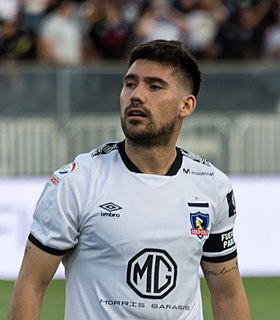 Ricardo Abumohor is a Chilean businessman of Palestinian origin, current owner of Primera División club O'Higgins since 2006. He also was the president of the Anfp five years, in where the Chilean national team during his period qualified to the 1998 FIFA World Cup held in France thanks to the coach Nelson Acosta.

Cristhian Venegas is a Chilean footballer who plays as a defender.

Raúl Andrés Osorio Medina is a Chilean professional footballer who plays for the Primera División club O'Higgins as a defender.

Iván Pardo is a Chilean footballer that currently plays for Trasandino as midfielder. 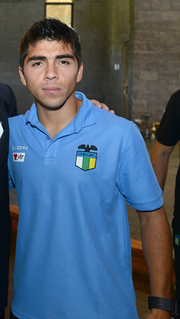 Juan Eduardo Fuentes Jiménez is a Chilean footballer that currently plays for the Primera Division club Universidad Católica on loan from Estudiantes de La Plata as midfielder. He is twin brother of the footballer Luis Fuentes.

The 2016 Copa Chile,, was the 37th edition of the Copa Chile, the country's national cup tournament. The competition started on 8 July 2016 with the First Round and ended on 14 December 2016 with the Final. Colo-Colo were the winners after beating Everton 4–0 in the final, and qualified for the 2017 Copa Libertadores and the 2017 Supercopa de Chile. As the runners-up, Everton qualified for the 2017 Copa Sudamericana.