Youth for Christ International (YFCI) is a worldwide Christian movement working with young people, whose main purpose is evangelism and missionary work. It began in New York City in 1940, when Jack Wyrtzen held evangelical Protestant rallies for teenagers. [1] Rallies were held in other U.S. cities during World War II, attracting particularly large crowds in Chicago led by Torrey Johnson, who became Youth for Christ president in 1944. Following the war, the movement expanded to other countries and the organization adopted the name Youth for Christ International in 1946. [1]

Youth for Christ rallies were first held in New York City in 1940, organized by Jack Wyrtzen, a young ex-insurance salesman who had also played the trombone in a cavalry band. [1] The Youth for Christ campaign idea spread to Washington, D.C., Detroit, Indianapolis and St. Louis. In 1944 Torrey Johnson, a Baptist minister and pastor of Chicago's Midwest Bible Church, staged "Chicagoland for Christ" and became the most successful advocate of this type of campaign. [1] Johnson was elected Youth for Christ's first president, with Billy Graham as its first full-time evangelist.

Following the end of World War II, the movement expanded to other countries after Charles Templeton of Toronto, Ontario, Canada, and Torrey Johnson met with a number of youth leaders from around the United States at Winona Lake, Indiana, in 1945 to form a working group that would become an international organization. [2] The name "Youth for Christ International" was adopted in 1946. By then, Youth for Christ International had approximately 300 units in the United States and over 200 overseas. The average attendance at rallies in 1946 was 350. The largest attendance at that time was 70,000 at Soldier's Field in Chicago. [1] Popular youth events such as Bible quizzing, which is now embraced by many Christian denominations, were originally begun as Youth for Christ activities. [3]

Evangelist Billy Graham was the first full-time evangelist of YFCI. Graham took over Johnson's local radio program called Songs in the Night which was broadcast over a local station in Illinois and predated YFCI. The movement also benefited by promotional publicity in the newspapers and magazines owned or influenced by William Randolph Hearst. [1] Large rallies were held at the Hollywood Bowl in Los Angeles, California, organized by Wilbur Nelson in 1949-1950. [4]

In 1968, in a little publicized conference in Jamaica, representatives from different countries created the International Council of Youth for Christ with Dr. Sam Wolgemuth as the first International President. The number of nations with Youth for Christ ministry had grown to over 100. Youth for Christ continued its growth throughout the 1970s and 1980s. Different ministry models and ministry emphases were developed and refined to reach young people around the world. During this time the current Youth for Christ logo was launched and adopted by the global organization. [5]

In 2002, leadership teams worldwide again met in Hungary to further explore how various Youth for Christ entities could unite behind a global ministry initiative. After a week of deliberation and consultation, the participants developed the framework of what later became the Global Ministry Plan. Between 2002 and 2003, The Global Ministry Plan was communicated and discussed throughout the Youth for Christ movement.

After consultations with most of the Youth for Christ chartered nations, the Global Ministry Plan was unanimously approved by the General Assembly at a gathering of the worldwide Youth for Christ family in Belo Horizonte, Brazil September 2003. At the Belo Horizonte General Assembly a new strategic focus statement was also adopted which is foundational to the Global Ministry Plan: "Youth for Christ reaches young people everywhere, working together with the local church and other like-minded partners to raise up lifelong followers of Jesus who lead by their godliness in lifestyle, devotion to the Word of God and prayer, passion for sharing the love of Christ and commitment to social involvement".

The British branch is now a member of The National Council for Voluntary Youth Services, [6] by virtue of its work for the personal and social development of young people.

In September 2008 the Youth for Christ worldwide family gathered in Magaliesburg, South Africa for the General Assembly. This was special event as over 350 young leaders from around the world joined the staff and a new initiative was launched: The Young Leader Development and Empowerment Process.

Dan Wolgemuth, a 1977 Taylor University graduate, is the current president of Youth For Christ USA. [7] Dave Brereton is the current International Director of Youth for Christ. 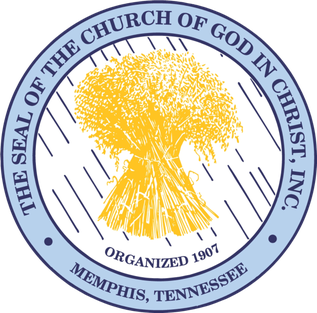 The Church of God in Christ (COGIC) is a Pentecostal–Holiness Christian denomination. COGIC is the largest Pentecostal denomination in the United States. Although an international and multi-ethnic religious organization, it has a predominantly African-American membership in the United States. The international headquarters is in Memphis, Tennessee. The current Presiding Bishop is Bishop John Drew Sheard Sr., who is the Senior Pastor of the Greater Emmanuel Institutional Church of God in Christ of Detroit, Michigan. He was elected as the denomination's leader on March 20, 2021.

William R. Bright was an American evangelist. In 1951 at the University of California, Los Angeles he founded Campus Crusade for Christ as a ministry for university students. In 1952 he wrote The Four Spiritual Laws. In 1979 he produced the film Jesus.

John Richard Rice was a Baptist evangelist and pastor and the founding editor of The Sword of the Lord, an influential fundamentalist newspaper.

The Bible Fellowship Church is a conservative pietistic Christian denomination with Mennonite roots.

The Church of Our Lord Jesus Christ of the Apostolic Faith is a Oneness Pentecostal church with headquarters in Manhattan. It was founded in 1919 by Robert C. Lawson. 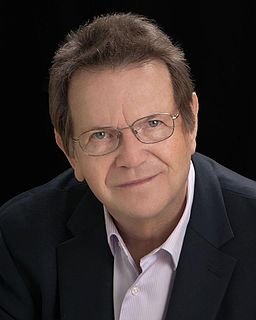 Reinhard Bonnke was a German-American Pentecostal evangelist, principally known for his gospel missions throughout Africa. Bonnke had been an evangelist and missionary in Africa since 1967. 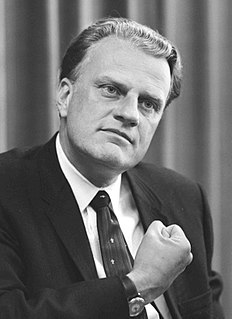 William Franklin Graham Jr. was an American evangelist, a prominent evangelical Christian figure, and an ordained Southern Baptist minister who became well known internationally in the late 1940s. One of his biographers has placed him "among the most influential Christian leaders" of the 20th century.

George Beverly Shea was a Canadian-born American gospel singer and hymn composer. Shea was often described as "America's beloved gospel singer" and was considered "the first international singing 'star' of the gospel world," as a consequence of his solos at Billy Graham Crusades and his exposure on radio, records and television. Because of the large attendance at Graham's Crusades, it is estimated that Shea sang live before more people than anyone else in history.

Reuben Archer Torrey was an American evangelist, pastor, educator, and writer. He aligned with Keswickian theology.

Word of Life Fellowship, Inc. is an international evangelistic Christian ministry headquartered in Schroon Lake, in the Adirondack Mountains region of New York in the United States. It was founded on Long Island in the 1930s by John Von Casper "Jack" Wyrtzen and Harry Bollback. By 1940, Word of Life owned a camp and a conference center in Schroon Lake, and the first Bible Institute was founded in 1970. Today, Word of Life has active ministry operations in over 70 countries and is involved in a wide variety of activities such as youth camps, Bible clubs, evangelistic campaigns, and radio ministry. It also operates several Bible institutes, including two located in Schroon Lake, New York, and Hudson, Florida, in the United States. The current executive director of Word of Life Fellowship is Don Lough, Jr.

Billy Kim is a prominent Christian evangelist and humanitarian. He was the president of the Baptist World Alliance from 2000 until 2005 when he was succeeded by David Coffey. 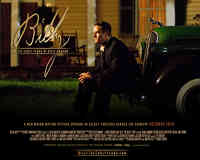 Billy: The Early Years is a 2008 American biographical film directed by Robby Benson. The film tells the story of the early life of evangelist Billy Graham, played by Armie Hammer. After almost a year and a half of delays, the film was released on DVD on March 16, 2010.

Torrey Maynard Johnson was a Chicago Baptist who is best remembered as the founder of Youth for Christ in 1944. For a time Johnson had his own local radio program called "Songs in the Night" which he later turned over to Billy Graham who was also hired as the first full time evangelist employed by Youth for Christ International. At one time he was pastor of Messiah Baptist Church, 2930 W.Flournoy Street, Chicago,IL.

John Von Casper "Jack" Wyrtzen was an American youth evangelist and founder of Word of Life ministries, which operates Christian camps, conference centers, and Bible institutes. He began holding youth rallies in 1940 in New York City, the beginning of the "Youth for Christ" movement.

Percy Bartimus Crawford was an evangelist and fundamentalist leader who especially emphasized youth ministry. During the late 1950s, he saw the potential of FM radio and UHF television and built the first successful Christian broadcasting network. He also founded The King's College and Pinebrook, a Bible conference in the Pocono Mountains.