An abortion clinic is a medical facility that provides abortions. Such clinics may be public medical centers, private medical practices or nonprofit organizations such as Planned Parenthood.

Abortion was criminalised in the Netherlands in 1911; nonetheless, a demand for terminating pregnancies remained, and an illegal abortion market grew. In 1962, about 25,000 abortions were performed in the entire country, all of them illegal and unsafe. 70 amateur abortionists were sentenced that year. [12] (12:27) Illegal abortions were mostly performed with very risky and dangerous methods, which led to serious infections and internal bleeding. About 20 to 30 women died of complications each year, while many others were disabled for life and resigned to wheelchairs. [12] (10:28)

In the late 1960s, the taboo on abortion was gradually broken in public discourse. More and more experts came to the point of view that abortions would happen anyway, whether or not the act was criminalised, and it was to conduct them safely for those women determined to end their pregnancy. [12] (12:43) In the early 1970s, the first specialised abortion clinics emerged such as in Arnhem (Mildredhuis, 1971) and Heemstede (Bloemenhove Clinic, 1973). [12] (16:01) By 1975, abortion clinic network Stimezo (an abbreviation of Stichting Medisch Verantwoorde Zwangerschapsonderbreking, "Medically Responsible Pregnancy Termination Foundation", set up in 1969) ran nine clinics throughout the country. [13] The government tolerated these illegal clinics until 1976, when Minister of Justice Dries van Agt tried to close the Bloemenhove Clinic, which was promptly occupied by hundreds of pro-choice activists from numerous women's rights organisations. After a two-week standoff, a judge ruled in favour of the clinic, and Van Agt had to back down from taking the clinic by force. It would take until 1984 when abortion was finally legalised after long-winded heated parliamentary debates, with high pressure from the pro-choice and pro-life camps. [13]

Between 2011 and 2016, 162 abortion clinics in the United States closed or stopped offering abortions due largely to legislative regulations enacted by Republican state lawmakers. [14] These bills, referred to as TRAP laws (Targeted Regulation of Abortion Provider) implement medically unnecessary restrictions for clinics that will be difficult or impossible for providers to meet, therefore forcing clinics to close under the guise of increasing the safety of the procedure. [15]

Access to abortions is extremely limited, particularly in rural and conservative areas. According to the Guttmacher Institute, 31% of women in rural areas traveled over 100 miles in order to receive an abortion while another 43% traveled between 50–100 miles. [16] These numbers are only increasing as more clinics are forced to close. Between 2011 and 2016 the number of abortion clinics in Texas dropped from 40 to 19 [17] as a result of the state's House Bill 2, which was struck down by the Supreme Court in June, 2016. [18]

Abortion clinics have frequently been the site of protests by anti-abortion activists. Protesters often engage in what is known as "sidewalk counseling", in which they warn people entering the clinic about risks of abortion, attempt to offer alternatives to abortion or show pictures of fetuses. [19] In 1985, 85% of abortion providers were experiencing either picketing, clinic blockades or invasion of the facility, [20] with 19% of providers receiving bomb threats and 16% were picketed at their homes. [21] In 2000 82% of facilities received protests with 61% receiving 20 or more pickets. [22]

The 2007 film Juno contains an example of such protest. The protagonist enters a clinic with the purpose of procuring an abortion, but sees a fellow student protesting outside the clinic who tells her that the fetus "has fingernails". [23] This causes Juno to change her mind about having an abortion, and she leaves the clinic, with her friend calling out to her, "God appreciates your miracle." [24]

Another tactic in which protestors film or photograph patients entering the clinic utilizes the societal stigma surrounding abortion and attempts to expose or shame women who are seeking the procedure. [25] Anti-abortion activists have also attempted to access abortion clinic medical records by breaking into dumpsters, proposing state legislation that would require clinics to provide information regarding their patients to the government and hacking online databases containing confidential patient information. [26]

In some countries, a buffer zone is enforced to prevent protesters from standing within a certain distance of the clinic entrance. [27] In the United States these buffer zones have been the subject of many lawsuits and legislative actions on both statewide and national levels. In 2014 the Supreme Court unanimously struck down a Massachusetts bill that had legalized a 35-foot buffer zone around abortion clinics in the state in 2007. [28]

Abortion clinics have frequently been subject to anti-abortion violence. The New York Times cites over 100 clinic bombings and incidents of arson, over 300 invasions, and over 400 incidents of vandalism between 1978 and 1993, [29] and the National Abortion Federation, an organization of abortion providers, cites over 300 attempted or completed instances of bombing or arson, thousands of invasions and vandalism incidents, as well as other attacks, between 1977 and 2009. [30] According to the NAF, the first instance of arson at an abortion clinic took place in March 1976 in Oregon, and the first bombing was in Ohio in February 1978. [31]

In the United States, the Freedom of Access to Clinic Entrances Act was passed in 1994 in response to acts of violence at clinics, which prohibits the use of force or obstruction to interfere with a person's attempt to obtain or provide reproductive health services, and the intentional damage of a reproductive health care facility such as an abortion clinic.

Abortion is the termination of a pregnancy by removal or expulsion of an embryo or fetus. An abortion that occurs without intervention is known as a miscarriage or "spontaneous abortion" and occurs in approximately 30% to 40% of pregnancies. When deliberate steps are taken to end a pregnancy, it is called an induced abortion, or less frequently "induced miscarriage". The unmodified word abortion generally refers to an induced abortion. 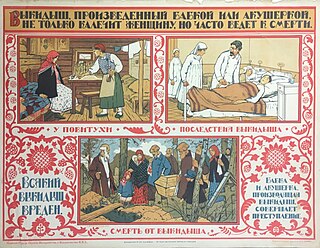 An unsafe abortion is the termination of a pregnancy by people lacking the necessary skills, or in an environment lacking minimal medical standards, or both. An unsafe abortion is a life-threatening procedure. It includes self-induced abortions, abortions in unhygienic conditions, and abortions performed by a medical practitioner who does not provide appropriate post-abortion attention. About 25 million unsafe abortions occur a year, of which most occur in the developing world. 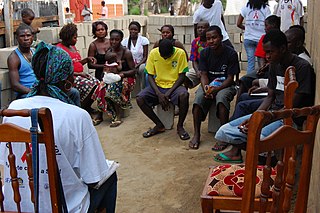 Within the framework of the World Health Organization's (WHO) definition of health as "a state of complete physical, mental and social well-being, and not merely the absence of disease or infirmity," reproductive health, or sexual health/hygiene, addresses the reproductive processes, functions and system at all stages of life. UN agencies claim sexual and reproductive health includes physical, as well as psychological well-being vis-a-vis sexuality.

Women on Web (WoW) is a Canadian non-profit organization that advocates for and facilitates access to contraception and safe abortion services to protect women's health and lives. People who need access to safe abortion or contraception can have an online consultation at Women on Web website. Women on Web program is a website available in 16 languages, including Arabic, English, French, German, Japanese, Korean, Hungarian, Indonesian, Italian, Persian, Polish, Portuguese, Russian, Spanish, Thai, and Turkish. The organization was founded by Dr. Rebecca Gomperts, a Dutch physician, in 2005.

Unintended pregnancies are pregnancies that are mistimed, unplanned or unwanted at the time of conception.

Both the Centers for Disease Control and Prevention (CDC) and the Guttmacher Institute regularly report abortion statistics in the United States. They use different methodologies, so they report somewhat different abortion rates, but they show similar trends. The CDC relies on voluntary reporting of abortion data from the states and the District of Columbia. The Guttmacher Institute, on the other hand, attempts to contact every abortion provider.

Abortion in Uganda is illegal unless performed by a licensed medical doctor in a situation where the woman's life is deemed to be at risk. 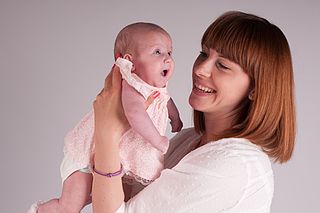 Nepal legalised abortion in March 2002, under the 11th Amendment to the Civil Code. The legal services were successfully implemented on December 25, 2003. The high maternal mortality rates in Nepal lead to the government legalising it. More than 5,00,000 women sought abortion between 2004–2014. In 2014, 323,100 women in Nepal had the abortion, among this, only 42% of abortions were legal and 19% were treated for abortion complications. Similar study had found the rate of unintended pregnancy as 50%.

Abortion in Kenya is prohibited with the exception of certain circumstances including danger to the life and health of the expectant mother, and rape. Unsafe abortions are a major cause of deaths and health complications for women in Kenya.

Abortion in Alabama is legal. Recent legislation, such as the "The Alabama Human Life Protection Act", has confused state constituents regarding the legality of abortion. Alabama's political and overarching religious beliefs has presented Alabama residents with limited access to abortion services. As of 2021, only three clinics remain in Alabama all of which are located in metropolitan areas of the state.

Abortion in New Jersey is legal. Abortion related laws were drafted by the legislature by the end of the 1900s. These laws would be addressed in court during the 1800s as they related to application in prosecutions of women for having abortions. During the 1940s, hospitals created committees to approve abortion requests with the goal of trying to reduce the number of abortions performed at them. Currently, there are no required waiting times and parental consent is not necessary.

Abortion, also known as pregnancy termination, up to the 24th week of pregnancy was legalized in New York (NY) in 1970, three years before it was decriminalized for the entire United States with the Supreme Court's passage of Roe v. Wade in 1973. The Reproductive Health Act, passed in 2019 in New York, further allows for abortions past the 24th week of pregnancy if a woman's life or health are at risk, or if the fetus is not viable.

Abortion in North Carolina is legal. Abortion related legislation existed in North Carolina by 1900, including a therapeutic exception. Research was being done about abortion nationally using North Carolina data to derive to estimates in 1967. State Targeted Regulation of Abortion Providers (TRAP) laws were in place by 2013. North Carolina abortion laws have been before the federal judiciary, including in March 2019 when U.S. District Judge William Osteen formally struck down North Carolina's life of the mother only 20-week abortion ban.

Abortion in Rhode Island is legal. On June 19, 2019, the legal right to abortion was codified into Rhode Island law by passage of the Reproductive Privacy Act. 71% of Rhode Islanders were found to support passing a law to protect safe, legal abortion in an October, 2018 poll.

Abortion in Utah is legal; However only 47% of Utah adults said in a Pew Research Center poll that abortion should be legal in all or most cases.

Abortion in Wisconsin is legal. 53% of adults said in a poll by the Pew Research Center that abortion should be legal in all or most cases.

Abortion in New Hampshire is legal. Abortion was criminalized in the state by 1900. In June 2003, the state passed a parental notification law, repealing it four years later before passing a new one in 2011. New Hampshire's abortion laws have been heard before the US Supreme Court, including the case Ayotte v. Planned Parenthood of Northern New England in 2006. The number of abortion clinics in New Hampshire has declined over the years, with eighteen in 1982, sixteen in 1992 and four in 2014. In 2010, there were three publicly funded abortions in the state, of which three were federally funded and zero were state funded. There are active abortion rights and anti-abortion rights activists in the state.