Airlines Tonga was an airline based in Nukuʻalofa, Tonga. It operated services within Tonga and flights are operated on its behalf by Air Fiji. [1] 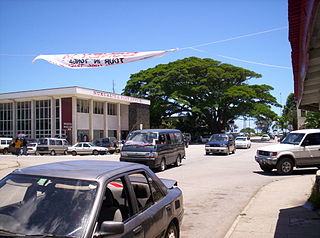 Nukuʻalofa is the capital of Tonga. It is located on the north coast of the island of Tongatapu, in the southernmost island group of Tonga.

On August 23, 2008, Airlines Tonga ceased all activity indefinitely, citing its inability to meet rising fuel costs. It does not intend, however to remain out of business permanently. [2] 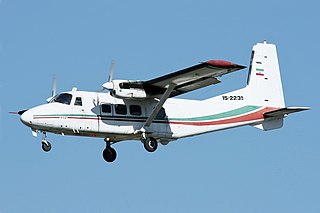 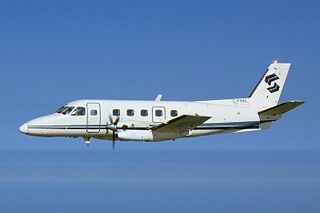 The Embraer EMB 110 Bandeirante is a Brazilian general purpose 15–21 passenger twin-turboprop light transport aircraft designed by Embraer for military and civil use.

Key West International Airport is an international airport located in the City of Key West in Monroe County, Florida and two miles east of the main commercial center of Key West.

Fiji Airways, is the flag carrier airline of Fiji. and operates international services to 13 countries and 23 cities including Fiji, Australia, New Zealand, Samoa, Tonga, Tuvalu, Kiribati, Vanuatu and Solomon Islands (Oceania), the United States, Hong Kong and Singapore. It has an extended network of 108 international destinations through its codeshare partners. The airline resumed direct flights to Narita, Tokyo on 3 July 2018. The Fiji Airways Group brings in 64 percent of all visitors who fly to Fiji, employs over 1000 employees, and earns revenues of over FJD$815 million.

Scenic Airlines is an American regional airline based in Paradise, Nevada, United States. It operates sightseeing flights from Boulder City Airport in Boulder City, Nevada. Scenic has been owned by Grand Canyon Airlines since 2008. 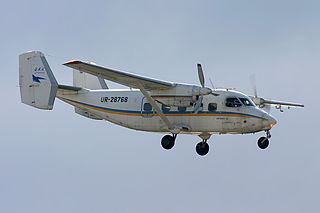 The Antonov An-28 is a twin-engined light turboprop transport aircraft, developed from the Antonov An-14M. It was the winner of a competition against the Beriev Be-30, for use by Aeroflot as a short-range airliner. It first flew in 1969. A total of 191 were built and 16 remain in airline service as at August 2015. After a short pre-production series built by Antonov, it was licence-built in Poland by PZL-Mielec. In 1993, PZL-Mielec developed its own improved variant, the PZL M28 Skytruck.

Air Jamaica Express was an airline based in Kingston, Jamaica, which, before folding, operated as a subsidiary of Air Jamaica. It operated domestic and inter-island scheduled flights and charter services. The airline was established in 1973 as Jamaica Air Taxi, and later operated as Trans-Jamaican Airlines until it was taken over by business man Gordon "Butch" Stewart, who also controlled Air Jamaica in 1994.

Lethbridge Airport, previously Lethbridge County Airport, is located 4 nautical miles south southeast of Lethbridge, Alberta, Canada. It is 10–15 driving minutes from downtown and has scheduled service to the Albertan city of Calgary. The airport is classified as an airport of entry by Nav Canada and is staffed by the Canada Border Services Agency (CBSA) on a call-out basis from the Sweetgrass-Coutts Border Crossing. CBSA officers at this airport can handle general aviation aircraft only, with no more than 15 passengers. The airport hosts the biennial Lethbridge International Airshow.

Corporate Air is an airline based in Billings, Montana, United States. It was established in 1981 and operates primarily domestic scheduled cargo services, Feeder service on behalf of FedEx Express, as well as the United States Postal Service. Its main base is Billings Logan International Airport.

The Grumman Gulfstream I is a twin-turboprop business aircraft. It first flew on August 14, 1958. 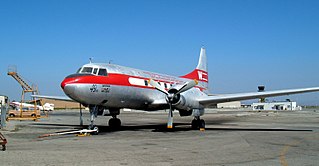 The Convair CV-240 is an American airliner that Convair manufactured from 1947 to 1954, initially as a possible replacement for the ubiquitous Douglas DC-3. Featuring a more modern design with cabin pressurization, the 240 series made some inroads as a commercial airliner, and had a long development cycle that produced various civil and military variants. Though reduced in numbers by attrition, various forms of the "Convairliners" continue to fly in the 21st century.

Rocky Mountain Airways was an American commuter airline headquartered in Hangar No. 6 of Stapleton International Airport in Denver, Colorado. It was sold to Texas Air Corporation/Continental Airlines in 1986 and was operated as a Continental Express subsidiary until its operations were merged with Britt Airways in 1991.

Eagle Air is an Icelandic airline. It is based at Reykjavík Airport and offers domestic flights, charter services, and adventure tours in Iceland.

Grand Canyon Scenic Airlines is an American regional airline based in Paradise, Nevada, United States. It operates sightseeing flights from Boulder City Airport in Boulder City, Nevada. Scenic has been owned by Grand Canyon Airlines since 2008.