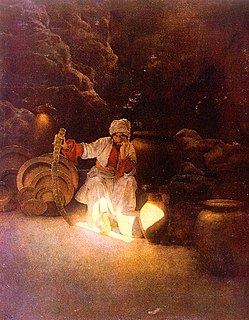 "Ali Baba and the Forty Thieves" is a folk tale added to the One Thousand and One Nights in the 18th century by its French translator Antoine Galland. As one of the most familiar of the "Arabian Nights" tales, it has been widely retold and performed in many media, especially for children, for whom the more violent aspects of the story are often suppressed.

Popeye the Sailor Meets Ali Baba's Forty Thieves is a two-reel animated cartoon short subject in the Popeye Color Feature series, produced in Technicolor and released to theatres on November 26, 1937 by Paramount Pictures. It was produced by Max Fleischer for Fleischer Studios, Inc. and directed by Dave Fleischer. Willard Bowsky was head animator, with musical supervision by Sammy Timberg. The voice of Popeye is performed by Jack Mercer, with additional voices by Mae Questel as Olive Oyl, Lou Fleischer as J. Wellington Wimpy and Gus Wickie as Abu Hassan. 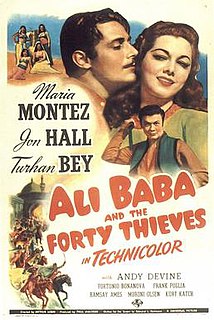 Ali Baba and the Forty Thieves is a 1944 adventure film from Universal Pictures, directed by Arthur Lubin, and starring Maria Montez and Jon Hall. The film is derived from The Book of One Thousand and One Nights, but its storyline departs greatly from the tale of the same name and includes an actual historic event. The film is one of series of "exotic" tales released by Universal during the Second World War; others include Cobra Woman, Arabian Nights and White Savage.

Ali Baba is a character from the folk tale Ali Baba and the Forty Thieves.

Alibabavum 40 Thirudargalum is a 1941 Indian Tamil-language comedy film directed by K. S. Mani. The first Tamil film adaptation of the story Ali Baba and the Forty Thieves, it stars N. S. Krishnan and T. A. Mathuram. The film was released on 15 March 1941, and was commercially unsuccessful. No print is known to survive, making it a lost film.

Ali Baba and the Forty Thieves is a folk tale about Ali Baba, a character from Arabian literature.

Penrod and Sam is a 1923 American silent comedy drama film directed by William Beaudine and starring Ben Alexander, Joe Butterworth, and Buddy Messinger. Wendy L. Marshall stated that "Beaudine had the Midas touch when it came to directing children" in films like this and Boy of Mine. In 1931, Beaudine directed a sound adaptation of the novel.

Ali Baba 40 Dongalu is a 1970 Telugu-language fantasy swashbuckler film, produced by N. Ramabrahmam under the Sri Gowtham Pictures banner and directed by B. Vittalacharya. It stars N. T. Rama Rao and Jayalalithaa. and music composed by Ghantasala. The film is based on a story from Arabian Nights called Ali Baba and the Forty Thieves.

Ali Baba is a 1973 Bengali short animated film directed by Rohit Mohra. It is a musical drama about the character Ali Baba from the folk tale Ali Baba and the Forty Thieves who discovers the secret of a thieves' den, to the ire of the thieves. Ali Baba is a poor woodcutter who discovers the secret of a thieves' den, entered with the phrase "Open Sesame". The thieves learn of Ali Baba's discovery and try to kill Ali Baba, but Ali Baba's faithful slave-girl foils their plots. Ali Baba gives his son to her in marriage and keeps the secret of the treasure. 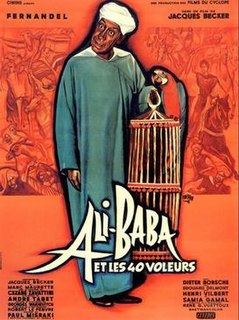 Ali Baba and the Forty Thieves is a 1954 French comedy film directed by Jacques Becker and starring Fernandel, Samia Gamal and Dieter Borsche. 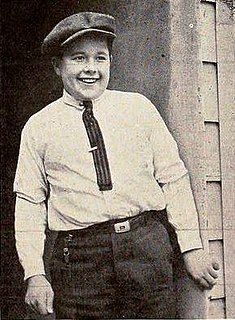 Buddy Messinger was an American actor who was cast in substantial roles in dozens of films during the silent film era. He began his career as a jovial chubby child actor. With the advent of sound films he was relegated mostly to bit parts. 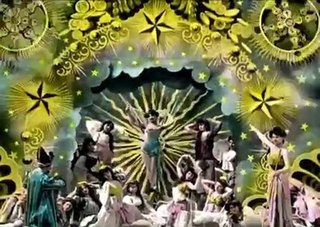 Ali Baba et les quarante voleurs(English: Ali Baba and the Forty Thieves) is a 1902 French short silent film directed by Ferdinand Zecca, inspired by the eponymous folk tale added to the One Thousand and One Nights in the 18th century by its French translator Antoine Galland, who heard it from the Maronite storyteller Hanna Diyab. It is the first cinematographic adaptation of this tale.