To aid the Nationalist government of China and to put pressure on Japan, President Franklin Roosevelt in April 1941 authorized the creation of a clandestine "Special Air Unit" consisting of three combat groups equipped with American aircraft and staffed by aviators and technicians to be recruited from the U.S. Army, Navy and Marine Corps for service in China. The program was fleshed out in the winter of 1940–1941 by Claire Lee Chennault, then an air advisor to the Chinese Nationalist leader Chiang Kai-shek, and Lauchlin Currie, a young economist in the Roosevelt White House. They envisioned a small air corps of 500 combat aircraft, although in the end, the number was reduced to 200 fighters and 66 light bombers. [1]

The 1st American Volunteer Group were recruited starting on 15 April 1941, when an unpublished executive order was signed by President Roosevelt. [2] A total of 100 P-40Bs were obtained from Curtiss-Wright, by convincing the British Government to take a later batch of more advanced P-40s in exchange. [2] The group assembled at RAF Mingaladon in Burma by November 1941 for training, where it was organized into three squadrons and established a headquarters. [3] The Flying Tigers did not go into combat until after the Japanese attack on Pearl Harbor on 7 December 1941. [2] Under Chennault's command, the Flying Tigers became famous in the defense of Burma and China. [2] It was disbanded and replaced by the United States Army Air Forces' 23rd Fighter Group in July 1942, with only five of its pilots choosing to continue with the AAF. [4]

In the fall of 1941, the 2nd American Volunteer Group was equipped with 33 Lockheed Hudson (A-28) and 33 Douglas DB-7 (A-20) bombers originally built for Britain but acquired by the U.S. Army as part of the Lend-Lease program passed earlier in the year. The Central Aircraft Manufacturing Company, fronting for the Chinese and American governments, recruited 82 pilots and 359 ground crew from the U.S. Army in the fall of 1941 and an undetermined number, including one pilot, sailed for Asia aboard Noordam and Bloemfontein of the Java-Pacific line. Other pilots reported to San Francisco and were scheduled to depart aboard the Lockheed Hudsons on 10 December. The Douglas DB-7s were to have gone by freighter to Africa, to be assembled and ferried to China but the December 7, 1941, attack on Pearl Harbor caused the program to be aborted. The vessels at sea were diverted to Australia, the aircraft were taken back into American service and most of the personnel rejoined the military, either in Australia or in the U.S.

The 3rd AVG was to have been a fighter group like the 1st. Because the 2nd AVG had been recruited from the U.S. Army, recruiting for the 3rd was to have been limited to the U.S. Navy and Marine Corps, starting in the early months of 1942. These plans too were abandoned as a result of the U.S. entry into World War II. 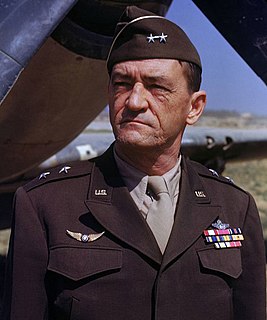 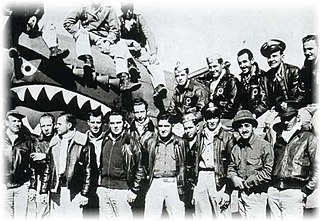 The First American Volunteer Group (AVG) of the Chinese Air Force in 1941–1942, nicknamed the Flying Tigers, was composed of pilots from the United States Army Air Corps (USAAC), Navy (USN), and Marine Corps (USMC), recruited under President Franklin Roosevelt's authority before Pearl Harbor and commanded by Claire Lee Chennault. Their P-40B aircraft, marked with Chinese colors, flew under American control. Their mission was to bomb Japan and defend China but many delays meant the AVG flew in combat after the US and Japan declared war. 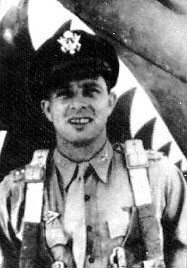 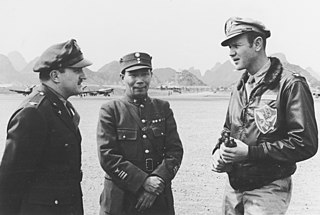 David Lee "Tex" Hill was an American fighter pilot and triple flying ace. He is credited with ​12 1⁄4 victories as a squadron leader with the Flying Tigers and another six as an officer in the United States Army Air Corps in World War II. He retired as a brigadier general. 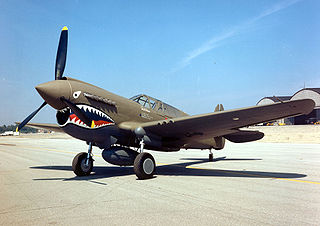 The Republic of China Air Force (ROCAF) was formed by the Kuomintang after the establishment of the Aviation Ministry in 1920. As tensions mounted between China and Imperial Japan in the 1930s, a number of smaller Chinese warlord airforce men and equipment became integrated into the ROCAF in a centralized effort to counter Imperial Japanese military ambitions. 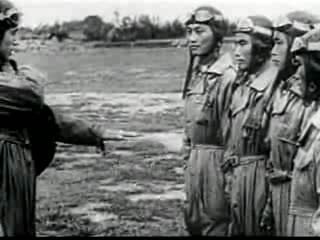 The Second Sino-Japanese War began on 7 July 1937 with the Marco Polo Bridge Incident in the Republic of China. The war, by some seen as the start of World War II, ended when the Empire of Japan surrendered to the Allies in August 1945. By the end of July 1937, fighting had escalated into a full-scale war and both countries deployed their air forces, ground troops, and warships into combat. Japanese heavy bombers also extensively bombed Chinese factories, airfields and conducted the first major air-raids against civilian targets in the war.

Edward Franklin Rector was a colonel in the United States Air Force, a fighter ace of World War II, and a member of the Flying Tigers.

Gerhard Neumann was a German-American aviation engineer and executive for General Electric's aircraft engine division. Born and raised in Germany, he went to China shortly before World War II and ended up being an aircraft mechanic for the United States Army Air Forces there. He became an American citizen by an Act of Congress and went on to a career in the aerospace manufacturing industry.

The 74th Fighter Squadron is a United States Air Force unit. It is assigned to the 23d Fighter Group and stationed at Moody Air Force Base, Georgia. 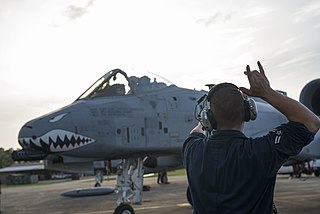 The 75th Fighter Squadron(75 FS) is a United States Air Force unit. It is assigned to the 23d Fighter Group and stationed at Moody Air Force Base, Georgia. 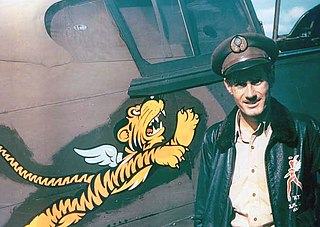 Robert Tharp (R.T.) Smith was a World War II fighter pilot and ace, credited with 8.7, 8.9 or 9 Japanese aircraft while fighting with the American Volunteer Group.

The China Air Task Force (CATF) was a combat organization of the United States Army Air Forces created in July 1942 under the command of Brig. Gen. Claire Chennault, after the Flying Tigers of the 1st American Volunteer Group of the Chinese Air Force were disbanded on 4 July of that month. It consisted of the 23rd Fighter Group with four squadrons, the assigned 74th, 75th, 76th, and attached 16th Fighter Squadrons, plus the 11th Bombardment Squadron. It was a subordinate unit of the Tenth Air Force in India, commanded by Brig. Gen. Earl Naiden and by Maj. Gen. Clayton Bissell. "Chennault had no respect for Bissell as a combat airman," wrote his biographer Martha Byrd, and "Bissell had no respect for Chennault as an administrator." Their relationship, she wrote, was ugly.

Charles Rankin Bond, Jr. was an American pilot and United States Air Force officer. He served with the Flying Tigers in Burma and China during World War II. He was shot down twice and was credited with shooting down 9.5 Japanese airplanes. He later served in the Soviet Union as an aide and personal pilot to W. Averell Harriman. He rose to the rank of brigadier general and, during the Vietnam War, he was the deputy commanding officer of the 2d Air Division in Vietnam and the 13th Air Force in the Philippines. He retired from the United States Air Force in 1968 as commander of the Twelfth Air Force. In 1984, Bond's diary of his service with the Flying Tigers was published and became a bestseller.

John Van Kuren "Scarsdale Jack" Newkirk was a United States naval aviator and squadron leader with the 1st American Volunteer Group (AVG), also known as the Flying Tigers, who may have led the first American offensive mission of World War II. Most of his combat experience was during the defense of Rangoon, Burma, from Japanese air attacks. After the fall of Rangoon, his unit was operating from within China when he set off on his final mission, as part of an attack on Japanese airfields in Thailand.