The label, which takes its name from the Greek word analekta ("a collection of the finest works"), was founded in 1988 by the Canadian music industry manager and entrepreneur François Mario Labbé, who is its owner and president. It is based in Montreal, Quebec, and has released more than 500 classical albums in the past 26 years.

Its first three CDs were an album by the Canadian violinist Angèle Dubeau, the first digital recording of the Red Army Choir, and a recording of the soundtrack of The Music Teacher starring José van Dam.

In 1988, while François Mario Labbé was producing shows around the world, he had in mind three recording projects, including one from violinist Angèle Dubeau. The multinationals at the time rarely agreed to produce music from Canadian artists, hence Labbé's motivation to create a recording company that would be focused on them. [2]

The label's initial CD was by Angèle Dubeau, [3] followed by the world's first digital recording of the Red Army Choir, and the soundtrack to The Music Teacher starring José van Dam.

The success of these three recordings, both nationally and internationally, led to more signings, and in 1995 the company released 40 albums. [2]

Labbé is the founder and CEO of the Canadian classical recording label Analekta. He was honored in 2010 with the title of Knight of National Order of Quebec for his contribution to the cultural development of Quebec. [5]

Angèle Dubeau, is a Canadian classical violinist. She has devoted a large part of her career to making classical music accessible to a wide audience, but also frequently plays works by contemporary composers. 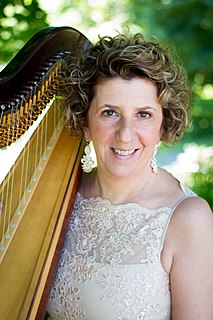 Caroline Léonardelli is a French-Canadian concert harpist. Born in France, she graduated from the Conservatoire de Paris at age of 18 and came to Canada to study at McGill University where she completed an Artist Diploma. Based in Canada's National Capital Region, she performs for CBC national broadcasts and for Radio Canada. Her recordings are featured by Apple Music in the top ten playlist of master harp recordings and her recording label is distributed worldwide by NAXOS. She is the Principal Harpist with the Ottawa Symphony and Orchestre symphonique de Gatineau.

Lorraine Desmarais C.M. is a French-Canadian jazz pianist and composer. Born in Montreal, she earned a B.Mus. (1977) and M.Mus. (1979) in classical piano at Université de Sherbrooke. She studied with Armas Maiste at McGill University in 1978-79, and later took lessons from Kenny Barron in New York. She has also been influenced by Chick Corea and Oscar Peterson.

Alain Lefèvre, is a French Canadian pianist and composer. He is one of the Québécois pianists who have sold the greatest number of musical recordings.

Marie-Nicole Lemieux, C.M., C.Q. is a Canadian coloratura contralto. She first came to the world's attention in 2000 when she became the first Canadian to win first prize at the Queen Elisabeth International Music Competition in Belgium. Since then Lemieux has established herself as one of the finest contraltos currently singing on the classical music stage, appearing with some of the world's best orchestras and singing with many great opera companies. Lemieux is admired for possessing an unusually flexible and beautiful contralto voice that does not have the heaviness that is often associated with her particular voice type. For this reason, Lemieux has become a favourite among lovers of Baroque opera and she is noted for her portrayal of characters in the operas of Handel and Vivaldi in particular. Her voice is admired for its richness, warmth and resonance and for its expressiveness and use of many different tone colours. Lemieux is also praised by critics for her stage presence and communicative power.

ATMA Classique is a Canadian record label based in Montreal, Quebec. Founded in 1994 by Johanne Goyette, the company has close to 600 titles in its catalogue and distributes in over 25 countries and on the internet. Several recordings released by the company have won Juno and Felix Awards.

Françoys Joseph Arthur Maurice Bernier was a Canadian pianist, conductor, radio producer, arts administrator, and music educator. He served as the music director of the Montreal Festivals from 1956 to 1960 and was an active conductor and a producer for CBC Radio during the 1950s and early 1960s. He was the General Director of the Orchestre Symphonique de Québec from 1960 to 1966 and then the orchestra's Music Director from 1966 to 1968. He was also active as a teacher of conducting at a number of universities, notably serving as the first director of the Music Department at the University of Ottawa.

The Orchestre Métropolitain (OM) is a Canadian orchestra based in Montreal, Quebec. The OM primarily gives its concerts in the Montreal Symphony House at Place des Arts, and also performs at Salle Wilfrid-Pelletier and Théâtre Maisonneuve. Outside of the Montreal city centre, the OM also gives concerts in Saint-Laurent, Outremont, Hochelaga-Maisonneuve, Rivière-des-Prairies–Pointe-aux-Trembles, Saint-Léonard, Verdun, Ahuntsic, Pierrefonds-Roxboro, and Pointe-Claire.

Fabien Gabel is a French conductor. He is currently the Music Director of the Quebec Symphony Orchestra and of the Orchestre Français des Jeunes.

Maxime Goulet is a Montreal-based Canadian composer who writes concert music as well as video game soundtracks. He currently teaches composition at the University of Sherbrooke. in Quebec, Canada.