A court of appeals, also called a court of appeal, [1] appellate court, appeal court, court of second instance or second instance court, is any court of law that is empowered to hear an appeal of a trial court or other lower tribunal. In much of the world, court systems are divided into at least three levels: the trial court, which initially hears cases and reviews evidence and testimony to determine the facts of the case; at least one intermediate appellate court; and a supreme court (or court of last resort) which primarily reviews the decisions of the intermediate courts, often on a discretionary basis. A particular court system's supreme court is its highest appellate court. [2] Appellate courts nationwide can operate under varying rules. [3]

Before hearing any case, the court must have jurisdiction to consider the appeal. The authority of appellate courts to review the decisions of lower courts varies widely from one jurisdiction to another. In some areas, the appellate court has limited powers of review. Generally, an appellate court's judgment provides the final directive of the appeals courts as to the matter appealed, setting out with specificity the court's determination that the action appealed from should be affirmed, reversed, remanded or modified. [4] Depending on the type of case and the decision below, appellate review primarily consists of: an entirely new hearing (a non trial de novo); a hearing where the appellate court gives deference to factual findings of the lower court; or review of particular legal rulings made by the lower court (an appeal on the record).

Bifurcation of civil and criminal appeals

The High Court has appellate jurisdiction over all other courts. Leave must be granted by the court, before the appeal matter is heard. The High Court is paramount to all federal courts. Further, it has an constitutionally entrenched general power of appeal from the Supreme Courts of the States and Territories. [8] [9] Appeals to the High Court are by special leave only, which is generally only granted in cases of public importance, matters involving the interpretation of the Commonwealth Constitution, or where the law has been inconsistently applied across the States and Territories.[19] Therefore, in the vast majority of cases, the appellate divisions of the Supreme Courts of each State and Territory and the Federal Court are the final courts of appeal. [10]

Main article: Court of Appeals of the Philippines

The Court of Appeal of Sri Lanka, located in Colombo, is the second senior court in the Sri Lankan legal system.

In the United States, both state and federal appellate courts are usually restricted to examining whether the lower court made the correct legal determinations, rather than hearing direct evidence and determining what the facts of the case were. [13] Furthermore, U.S. appellate courts are usually restricted to hearing appeals based on matters that were originally brought up before the trial court. Hence, such an appellate court will not consider an appellant's argument if it is based on a theory that is raised for the first time in the appeal. [14]

In most U.S. states, and in U.S. federal courts, parties before the court are allowed one appeal as of right. This means that a party who is unsatisfied with the outcome of a trial may bring an appeal to contest that outcome. However, appeals may be costly, and the appellate court must find an error on the part of the court below that justifies upsetting the verdict. Therefore, only a small proportion of trial court decisions result in appeals. Some appellate courts, particularly supreme courts, have the power of discretionary review, meaning that they can decide whether they will hear an appeal brought in a particular case.

A trial court or court of first instance is a court having original jurisdiction, in which trials take place. Appeals from the decisions of trial courts are usually made by higher courts with the power of appellate review. Most appellate courts do not have the authority to hear testimony or take evidence, but instead rule solely on matters of law.

A writ of coram nobis is a legal order allowing a court to correct its original judgment upon discovery of a fundamental error that did not appear in the records of the original judgment's proceedings and that would have prevented the judgment from being pronounced. The term coram nobis is Latin for "before us" and the meaning of its full form, quae coram nobis resident, is "which [things] remain in our presence". The writ of coram nobis originated in the courts of common law in the English legal system during the sixteenth century.

Discretionary review is the authority appellate courts have to decide which appeals they will consider from among the cases submitted to them. This offers the judiciary a filter on what types of cases are appealed, because judges have to consider in advance which cases will be accepted. The appeals court will then be able to decide substantive cases with the lowest opportunity cost. The opposite of discretionary review is any review mandated by statute, which guides appellate courts about what they can and cannot do during the review process. 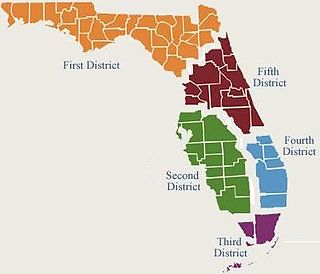 The district courts of appeal (DCAs) are the intermediate appellate courts of the Florida state court system. There are currently five DCAs:

A supreme court is the highest court within the hierarchy of courts in most legal jurisdictions. Other descriptions for such courts include court of last resort, apex court, and highcourt of appeal. Broadly speaking, the decisions of a supreme court are not subject to further review by any other court. Supreme courts typically function primarily as appellate courts, hearing appeals from decisions of lower trial courts, or from intermediate-level appellate courts.

Uniformity and jurisdiction in the tax decisions of the United States federal courts. is the ongoing debate spanning many decades about achievement of uniformity and decisionmaking by federal courts when addressing tax controversies against the backdrop of multiple, regionally diverse courts with federal tax jurisdiction.