An approved school was a type of residential institution in the United Kingdom to which young people could be sent by a court, usually for committing offences but sometimes because they were deemed to be beyond parental control. They were modelled on ordinary boarding schools, from which it was relatively easy to leave without permission. This set approved schools apart from borstals, a tougher and more enclosed kind of youth prison.

The term came into general use in 1933 [1] when approved schools were created out of the earlier "industrial" and earlier "reformatory" schools. [2] Following the Children and Young Persons Act 1969, they were replaced by Community Homes, with responsibility devolved to local councils; in Singapore, which by then was no longer under British rule, the term approved schools continued to exist.[ citation needed ]

Approved schools were mostly run by voluntary bodies, under the overall supervision of the Home Office or the Scottish Education Department, [3] and subject to the Approved School Rules 1933. [4] The Home Office maintained a team of inspectors who visited each institution from time to time. In Scotland the Education Department made the appropriate arrangements for inspection and administration.

Offenders sent to approved schools, as well as receiving academic tuition, were assigned to work groups for such activities as building and bricklaying, metalwork, carpentry and gardening. [5] Many approved schools were known for strict discipline, with corporal punishment used where deemed necessary, generally a rather more severe version of the caning or strapping that was common in ordinary secondary schools. [6] In particular, boys and girls [7] who absconded were given a maximum caning of 8 strokes (sometimes 6) on the clothed bottom immediately on return to the school, and a 1971 statistical study found that this could be an effective deterrent. [8]

In Scotland, after 1961, only Heads of Schools were allowed to apply corporal punishment, using a strap. Each incident had to be recorded in the School's Punishment Book designating the offence and the part of the child's body. This would then be counter-signed by school medical officers during their weekly visit. Increases in the frequency of Home Leave and the introduction of a wider range of privileges offered scope for regimes without corporal punishment.[ citation needed ]

Approved schools were split into three age groups: Junior, Intermediate and Senior. Most were for boys; there was a small number of separate approved schools for girls.

The term "approved school" officially ceased to exist in the UK in the early 1970s. In England and Wales, as a result of the Children and Young Persons Act 1969, responsibility for these institutions was devolved from central government to local councils and they were renamed "Community Homes". [9]

In Scotland, after the Kilbrandon Report was published, its recommendations were incorporated in the Social Work (Scotland) Act 1968, and with the introduction of Children's Hearings, the administration for offending children continued to differ from that in England.

Spanking is a common form of corporal punishment, involving the act of striking the buttocks of another person to cause physical pain, generally with an open hand. More severe forms of spanking, such as switching, paddling, belting, caning, whipping, and birching, involve the use of an object instead of a hand.

Caning is a form of corporal punishment consisting of a number of hits with a single cane usually made of rattan, generally applied to the offender's bare or clothed buttocks or hand(s). Caning on the knuckles or shoulders is much less common. Caning can also be applied to the soles of the feet. The size and flexibility of the cane and the mode of application, as well as the number of the strokes, vary greatly — from a couple of light strokes with a small cane across the seat of a junior schoolboy's trousers, to a maximum of 24, very hard, wounding cuts on the bare buttocks with a large, heavy, soaked rattan as a judicial punishment in some Southeast Asian countries.

Birching is a form of corporal punishment with a birch rod, typically applied to the recipient's bare buttocks, although occasionally to the back and/or shoulders. 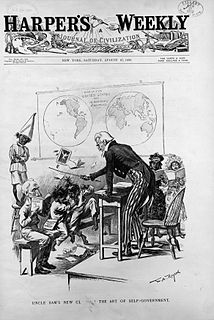 School discipline relates to the actions taken by a teacher or the school organization towards a student when the student's behavior disrupts the ongoing educational activity or breaks a rule created by the school. Discipline can guide the children's behaviour or set limits to help them learn to take better care of themselves, other people and the world around them. 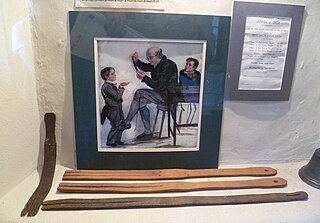 The tawse, sometimes formerly spelled taws is an implement used for corporal punishment. It was used for educational discipline, primarily in Scotland, but also in schools in the English cities of Newcastle upon Tyne, Gateshead, Manchester and Walsall. 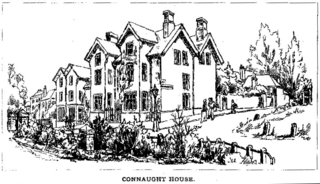 The Industrial Schools Act was intended in 1857 to solve problems of juvenile vagrancy in England by removing poor and neglected children from their home environment to a boarding school. The Act allowed magistrates to send disorderly children to a residential industrial school. An 1876 Act led to nonresidential day schools of a similar kind.

A reformatory or reformatory school is a youth detention center or an adult correctional facility popular during the late 19th and early 20th centuries in Western countries. In the United Kingdom and United States, they came out of social concerns about cities, poverty, immigration, and gender following industrialization, as well as from a shift in penology to reforming instead of punishing the criminal. They were traditionally single-sex institutions that relied on education, vocational training, and removal from the city. Although their use declined throughout the 20th century, their impact can be seen in practices like the United States' continued implementation of parole and the indeterminate sentence.

Caning is a widely used form of corporal punishment in Singapore. It can be divided into several contexts: judicial, prison, reformatory, military, school, and domestic. These practices of caning are largely a legacy of, and are influenced by, British colonial rule in Singapore. Similar forms of corporal punishment are also used in some other former British colonies, including two of Singapore's neighbouring countries, Malaysia and Brunei.

A slippering is a term for the act of smacking the buttocks, or the hands, with a slipper as a form of corporal punishment. A slippering on the buttocks is a form of spanking; it is a much more common method than slippering on the hands. The verb "to slipper" means "to give a slippering". Until at least the 1970s, slippering was widely used by British parents as a means of punishing children and adolescents. The routine nature of such punishment is demonstrated by the frequency with which comics of the day showed scenes in which characters such as Dennis the Menace, Roger the Dodger, Minnie the Minx and Beryl the Peril were slippered by an irate parent. There has been very little data, research or evidence compiled about the use of slippering. Information is mainly based on anecdotal reports from individuals who have given, received, or observed slipperings, or who have been in households or schools where slipperings were used. Slipperings are particularly associated with Britain and Commonwealth countries, although not exclusively so.

The Commission to Inquire into Child Abuse (CICA) was one of a range of measures introduced by the Irish Government to investigate the extent and effects of abuse on children from 1936 onwards. It was commonly known in Ireland as the Ryan Commission, after its chair, Mr Justice Seán Ryan. Judge Laffoy resigned on 2 September 2003, following a departmental review on costs and resources. She felt that: "...the cumulative effect of those factors effectively negated the guarantee of independence conferred on the Commission and militated against it being able to perform its statutory functions." The Commission's work started in 1999 and it published its public report, commonly referred to as the Ryan report, on 20 May 2009.

In the United Kingdom, prisoners are divided into four categories of security. Every adult in prison is assigned a different category, all depending on the crime they committed, the sentence, the risk of escape, and violent tendencies. The higher the category, the worse the convictions are. 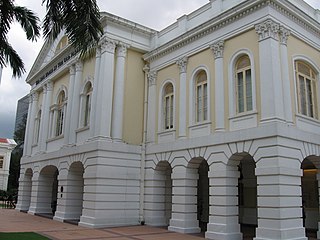 The Vandalism Act is a statute of the Parliament of Singapore that criminalizes a number of different acts done in relation to public and private property, namely, stealing, destroying or damaging public property; and, without the property owner's written consent, writing, drawing, painting, marking or inscribing on property; affixing posters, placards, etc., to the property; and suspending or displaying on or from the property any flag, banner, etc.

Caning is used as a form of corporal punishment in Malaysia. It can be divided into at least four contexts: judicial/prison, school, domestic, and sharia/syariah. Of these, the first is largely a legacy of, and are influenced by, British colonial rule in the territories that are now part of Malaysia, particularly Malaya. Similar forms of corporal punishment are also used in some other former British colonies, including two of Malaysia's neighbouring countries, Singapore and Brunei.

School corporal punishment is inflicting deliberate physical pain/discomfort as a response to undesired behavior by a student or group of students. It often involves striking the student across the buttocks or palms of their hands with a tool such as a rattan cane, wooden paddle, slipper, leather strap or wooden yardstick. Less commonly, it could also include spanking or smacking the student with the open hand, especially at the kindergarten, primary school, or other more junior levels. 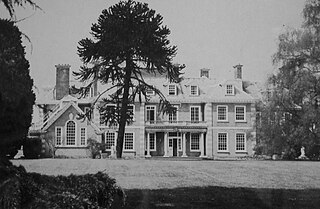 Michaelstowe Hall is a manor house in the village of Ramsey near Harwich, Essex, England.