Arlington Heights is a neighborhood in Fort Worth, Texas.

A Denver, Colorado-originating promoter named H. B. Chamberlain bought 2,000 acres (810 ha) of land from a Chicago financier named Tom Hurley and Robert McCart. He attempted to develop Arlington Heights, but a hotel he built, Ye Arlington Inn, burned in 1894 and he died in a bicycle accident in London. Arlington Heights was developed after the United States moved military personnel in the surrounding area in World War I. [1]

Joyce E. Williams, a sociologist who wrote Black Community Control: A Study of Transition in a Texas Ghetto, wrote that almost all of the Lake Como women worked in Arlington Heights. Those women referred to it as "Little California", a reference to a fantasy idea of the state of California. [2]

Tarrant County is located in the U.S. state of Texas. As of 2020, it had a population of 2,110,640. It is Texas' third-most populous county and the 15th-most populous in the United States. Its county seat is Fort Worth. 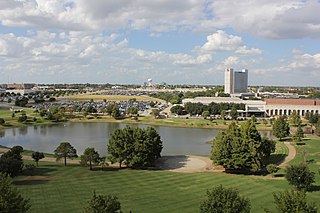 Arlington is a city in the U.S. state of Texas, located in Tarrant County. It forms part of the Mid-Cities region of the Dallas–Fort Worth–Arlington metropolitan statistical area, and is a principal city of the metropolis and region. According to the U.S. Census Bureau's 2019 population estimates, the city had a population of 398,854, making it the second-largest city in the county after Fort Worth. Arlington is the 49th-most populous city in the United States, the seventh-most populous city in the state of Texas, and the largest city in the state that is not a county seat.

Dalworthington Gardens is a city in Tarrant County, Texas, United States and a suburb of Arlington. The population was 2,259 at the 2010 census. 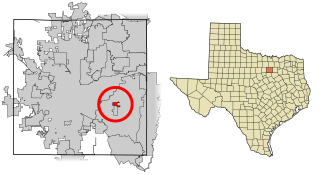 Pantego is a town in Tarrant County, Texas, United States. The population was 2,394 at the 2010 census. It is entirely surrounded by the cities of Arlington and Dalworthington Gardens. It is in the middle of the Dallas–Fort Worth metroplex, a metropolitan area spanning several counties.

Westworth Village is a city in Tarrant County, Texas, United States. The population was 2,472 at the 2010 census.

Texas Wesleyan University is a private Methodist university in Fort Worth, Texas. It was founded in 1890 by the Methodist Episcopal Church, South. The main campus is located in the Polytechnic Heights neighborhood of Fort Worth. Its mascot is the ram.

The Como neighborhood is a historically African-American neighborhood located on the west side of Fort Worth, Texas. Como was named after Como, Italy. One of its most valuable residents was neighborhood activist Viola Pitts. The Como Lake was built in 1889. Originally the neighborhood was conceived as a resort. In the early 1900s Lillian Russell visited the resort and was impressed by it. The neighborhood newspaper, the Lake Como Weekly, was published under several titles between 1940 and 1986. 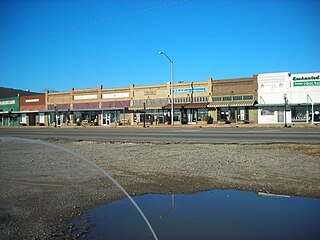 Handley was a town in Tarrant County, Texas United States. It is located between downtown Fort Worth and Arlington along State Highway 180, and includes the Central Handley Historic District. It is now a part of Fort Worth.

The Catholic Diocese of Fort Worth in the United States was established on August 9, 1969, after being part of the Diocese of Dallas for 79 years. At present, the diocese has more than 1 million Catholics in 90 parishes and missions, served by 123 priests, 110 deacons, 24 sisters, and 5 brothers. It is made up of 28 counties of North Central Texas: Archer, Baylor, Bosque, Clay, Comanche, Cooke, Denton, Eastland, Erath, Foard, Hardeman, Hill, Hood, Jack, Johnson, Knox, Montague, Palo Pinto, Parker, Shackelford, Somervell, Stephens, Tarrant, Throckmorton, Wichita, Wilbarger, Wise, and Young with a total of 23,950 mi2.

The Birdville Independent School District is a K-12 public school district based in Haltom City, Texas (USA). The name derives from a former community in the area, which later became part of Haltom City.

Arlington Baptist University is a private Baptist Bible college in Arlington, Texas. It is the official education institution of the World Baptist Fellowship and it offers both undergraduate and graduate degree programs.

Arlington Heights High School is a secondary school located in Fort Worth, Texas, United States. The school, which serves grades 9 through 12, is a part of the Fort Worth independent school District. Its mascot is the Yellow Jacket and its colors are blue and gold.

The Treaty of Bird's Fort, or Bird's Fort Treaty was a peace treaty between the Republic of Texas and some of the Indian tribes of Texas and Oklahoma, signed on September 29, 1843. The treaty was intended to end years of hostilities and warfare between the Native Americans and the white settlers in Texas. The full title of the treaty was "Republic of Texas Treaty with the Indigenous Nations of the Delaware, Chickasaw, Waco, Tawakani, Keechi, Caddo, Anadahkah, Ionie, Biloxi, and Cherokee." The principal negotiators for the Republic of Texas were Edward H. Tarrant and George W. Terrell.

Woodhaven is a neighborhood at the corner of Interstate 30 and the Loop 820 East interchange in Fort Worth, Texas, United States. The neighborhood is bounded by the Trinity River to the north and the former CBS Channel 11 KTVT studios to the south. The Woodhaven Country Club, which has a clubhouse, a 6,543-yard, par 71, 18-hole golf course, a swimming pool, and tennis courts, is the center of the community.

Village Creek is a tributary creek of the West Fork of the Trinity river in Tarrant and Johnson county, Texas, USA. It is the main inflow of Lake Arlington. It is approximately 23 miles (37 km) long. Its watershed is approximately 143 square miles (370 km2).

Staley Thomas McBrayer was a newspaper publisher and inventor best known for inventing the Vanguard web offset press for newspaper printing. A native of Saltillo, Texas, he earned degrees from East Texas State Teachers College and the University of Texas at Austin. He owned numerous newspapers in Fort Worth, other cities in the Dallas–Fort Worth metroplex, and Greater Houston. After five years of effort and experimentation, he ultimately succeeded in modifying an offset printing press designed for book printing and adapting it for printing newspapers: the resulting Vanguard web offset press, which he unveiled in 1954, reduced the cost, time, and manual labor required to print newspapers, which was especially beneficial to small newspapers. Due to his invention, he is sometimes referred to as the "Orville Wright" or "Wilbur Wright" of offset newspaper publishing.