In 1940, during the Second World War, the Council for the Encouragement of Music and the Arts (CEMA), was appointed to help promote and maintain British culture. Chaired by Lord De La Warr, President of the Board of Education, the Council was government-funded and after the war was renamed the Arts Council of Great Britain.

A Royal Charter was granted on 9 August 1946, [1] followed by another in 1967. The latter provided for functions in Scotland and Wales to be conducted by two almost[ citation needed ] autonomous committees known as the Scottish and Welsh Arts Councils – the basis for today’s Scottish Arts Council and Arts Council of Wales.

The Council's first Chairman was John Maynard Keynes who used his influence in Government to secure a high level of funding despite Britain's poor finances following the war. The majority of this funding was directed to organisations with which Keynes had close ties such as the Royal Opera House and was restricted to Central London. Keynes used his political influence to ensure that the Arts Council reported directly to the Treasury rather than an Arts Minister or the Education Department as had been the case with CEMA, establishing the principle of an 'arms length' relationship between UK Arts policy and the government of the day.

After Keynes' death in April 1946, Government funding was reduced but the Arts Council received wide recognition for its contribution to the Festival of Britain thanks to the new Chairman Kenneth Clark. Artworks commissioned by the Council for the Festival were retained to form the basis of the Arts Council Collection.[ citation needed ] The Arts Council commissioned 12 sculptors and 60 painters, who made large paintings, 114 by 152 centimetres (45 by 60 in) or more, to be displayed at the festival. Ultimately the works were to be given to new hospitals, libraries, schools, and health centres that emerged after the war. There were five cash prizes awarded: Robert Adams's Apocalyptic Figure, Elinor Bellingham-Smith's The Island, Lucian Freud's Interior near Paddington, William Gear's Autumn Landscape, and Robert MacBryde's Figure and Still Life. [2]

Under the Harold Wilson Government of 1964–70 the Arts Council enjoyed a Golden Age thanks to the close relationship between Chairman Arnold Goodman and the Arts Minister Jennie Lee. This period saw the Council establish a network of arts organisations across the country as regular client organisations and a programme of touring exhibitions and performances. To support the Council’s responsibilities in relation to the visual arts, it opened the Hayward Gallery on London's South Bank in 1968 as a home for its major exhibitions and the base for the Arts Council Collection. Since 1987, the gallery has been independently managed by the South Bank Centre. In 2003 sculpture in the Collection was moved to a base in Yorkshire.

During the 1970s and 1980s the Arts Council came under attack for being elitist and politically biased, in particular from the prominent Conservative Party minister Norman Tebbit.[ citation needed ] The Government grant to the Council was capped effecting a real terms reduction in funding though it was argued that any shortfall would be made up by increased sponsorship from the private sector. The Secretary-General from 1975 to 1983, Roy Shaw, the last secretary-General to be knighted, faced the difficult task of reconciling the needs of arts organisations with the restricted funding. William Rees-Mogg was a political appointment as Chairman and proposed slimming down the Council's responsibilities. This led to a series of clashes with prominent figures from the Arts such as Peter Hall, who resigned from the Council in protest. In 1987 the restructure inspired by Rees-Mogg cut by half the number of organisations receiving Arts Council funding. During the same period the Arts Council began encouraging a greater level of corporate sponsorship for the arts.

Chairmen of the Arts Council

The Department for Digital, Culture, Media and Sport (DCMS) is a department of the United Kingdom government, with responsibility for culture and sport in England, the building of a Digital Economy, and some aspects of the media throughout the whole UK, such as broadcasting and internet.

William Rees-Mogg, Baron Rees-Mogg Kt was a British newspaper journalist who was Editor of The Times from 1967 to 1981. In the late 1970s he served as High Sheriff of Somerset, and in the 1980s was Chairman of the Arts Council of Great Britain and Vice-Chairman of the BBC's Board of Governors. He was the father of the politicians Jacob and Annunziata Rees-Mogg. 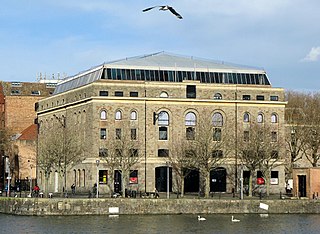 Arnolfini is an international arts centre and gallery in Bristol, England. It has a programme of contemporary art exhibitions, artist's performance, music and dance events, poetry and book readings, talks, lectures and cinema. There is also a specialist art bookshop and a café bar. Educational activities are undertaken and experimental digital media work supported by online resources. A number of festivals are regularly hosted by the gallery.

The National Lottery Community Fund, legally named the Big Lottery Fund, is a non-departmental public body responsible for distributing funds raised by the National Lottery for "good causes". Since 2004 it has awarded over £6 billion to more than 130,000 projects in the UK.

The UK Film Council (UKFC) was a non-departmental public body set up in 2000 to develop and promote the film industry in the UK. It was constituted as a private company limited by guarantee, owned by the Secretary of State for Culture, Media and Sport, and governed by a board of 15 directors. It was funded from various sources including the National Lottery. John Woodward was the Chief Executive Officer of the UKFC. As at 30 June 2008, the company had 90 full-time members of staff. It distributed more than £160m of lottery money to over 900 films. Lord Puttnam described the Council as "a layer of strategic glue that's helped bind the many parts of our disparate industry together."

The Scottish Arts Council was a Scottish public body responsible for the funding, development and promotion of the arts in Scotland. The Council primarily distributed funding from the Scottish Government as well as National Lottery funds received via the Department for Culture, Media and Sport.

The Arts Council of Northern Ireland is the lead development agency for the arts in Northern Ireland. It was founded in 1964, as a successor to the Committee for the Encouragement of Music and the Arts (CEMA).

Jacob William Rees-Mogg is a British politician serving as Leader of the House of Commons and Lord President of the Council since 2019, and who has served as Member of Parliament (MP) for North East Somerset since 2010. A member of the Conservative Party, Rees-Mogg is a social conservative. 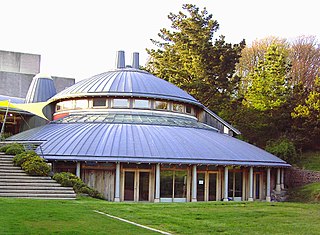 Sir William Emrys "Bill" Williams, CBE was Editor-in-Chief of Penguin Books from 1936 to 1965 and an educationalist and powerhouse of popular education in the 20th century. A close collaborator with Allen Lane, Penguin's founder, for over thirty years, Williams was the cultural force behind Penguin Books' success and was the creator of the Pelican imprint.

Clore Leadership is a dynamic and inclusive resource for leaders and aspiring leaders in the arts, culture and creative sectors. Clore Leadership was initiated in 2003 by the Clore Duffield Foundation and is sustained by a partnership between private philanthropy and public funding. It has succeeded in creating a sought-after cadre of creative and cultural leaders and inspired investment in leadership on the part of governments, agencies, foundations and charities both nationally and internationally. Programmes range from a tailored Fellowship, through intensive leadership courses, leadership development days, seminars, webinars, conferences and events.

The Edinburgh Art Festival is an annual visual arts festival, held in Edinburgh, Scotland, during August and coincides with the Edinburgh International and Fringe festivals. The Art Festival was established in 2004, and receives public funding from Creative Scotland. The current Festival Director is Sorcha Carey.

The British Triathlon Federation is the national governing body for triathlon, duathlon and associated multisport in Great Britain. It administers triathlon in England, Scotland, Wales, the Channel Islands and the Isle of Man. It represents Britain at the world body, the International Triathlon Union (ITU) and the regional body the European Triathlon Union (ETU). The BTF also selects athletes to represent the national team, at races such as the world triathlon series and the Olympic games.

Making Music is a UK organisation for voluntary music, with around 3,500 member groups. Its members include choirs, orchestras, music promoters, jazz and wind bands, community festivals, and samba groups, among others. 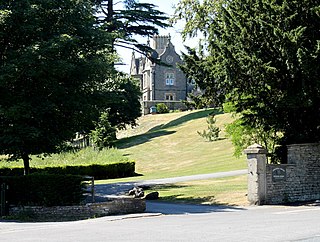 Cholwell is a historic manor in the parish of Cameley, North Somerset, England. The manor house, Cholwell House, was rebuilt in 1855 by William Rees-Mogg (1815-1909). It is a Grade II listed building.