Athlone Pursuivant of Arms (or Athlone Pursuivant) was a junior officer of arms in Ireland, founded 1552 during the reign of Edward VI, King of England and King of Ireland, and was named for the town of Athlone, which is partly in Co. Roscommon (in the province of Connacht). The other heraldic offices of Ireland being Ireland King of Arms, 1392-1485, the Ulster King of Arms (Ulster) from 1552, the Dublin Herald (Leinster) and the Cork Herald (Munster). Accordingly, an officer was named for each of the four traditional provinces of Ireland. From 1943 the Ulster King of Arms was merged with the Norroy King of Arms as the Norroy and Ulster King of Arms with jurisdiction for Northern Ireland. Heraldic matters in the Republic of Ireland are now handled by the office of the Chief Herald of Ireland (a part of the Genealogical Office in the National Library).

The Order of St. Patrick was instituted by George III 5 Feb 1783 and the Athlone Persuivant became one of its officers thereafter, being 12th in order of precedence. There are no living members of the Order.

James Joyce mentioned the office in 'Ulysses' and again in 'Finnegans Wake' as the "Athlone Poursuivant".

On the death of Burtchaell, Nevile Wilkinson suggested Thomas Sadleir to succeed the deceased. However, Sadleir declined to accept the offer. He operated the Office of Arms in the capacity of Deputy Ulster King of Arms. The post of Athlone Pursuivant had never been filled since then. [34] 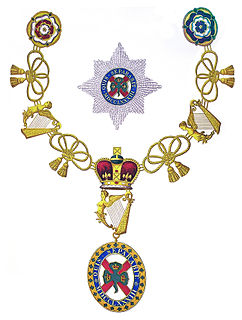 The Most Illustrious Order of Saint Patrick is a dormant British order of chivalry associated with Ireland. The Order was created in 1783 by George III at the request of the then Lord Lieutenant of Ireland, the 3rd Earl Temple. The regular creation of knights of the Order lasted until 1922, when most of Ireland gained independence as the Irish Free State, a dominion within what was then known as the British Commonwealth of Nations. While the Order technically still exists, no knight of St Patrick has been created since 1936, and the last surviving knight, Prince Henry, Duke of Gloucester, died in 1974. Elizabeth II, however, remains the Sovereign of the Order, and one officer, the Ulster King of Arms, also survives. St Patrick is patron of the order; its motto is Quis separabit?, Latin for "Who will separate [us]?": an allusion to the Vulgate translation of Romans 8:35, "Who shall separate us from the love of Christ?" 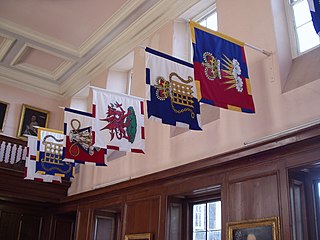 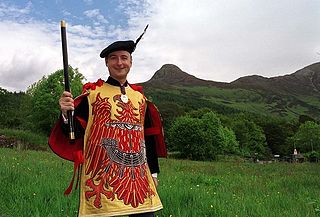 A pursuivant or, more correctly, pursuivant of arms, is a junior officer of arms. Most pursuivants are attached to official heraldic authorities, such as the College of Arms in London or the Court of the Lord Lyon in Edinburgh. In the mediaeval era, many great nobles employed their own officers of arms. Today, there still exist some private pursuivants that are not employed by a government authority. In Scotland, for example, several pursuivants of arms have been appointed by Clan Chiefs. These pursuivants of arms look after matters of heraldic and genealogical importance for clan members. 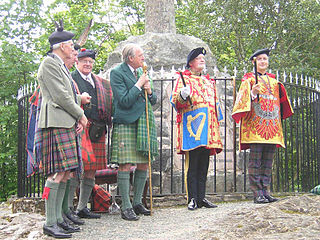 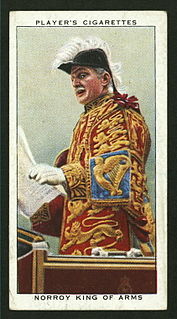 Aubrey John Toppin was a long-serving English officer of arms at the College of Arms in London. 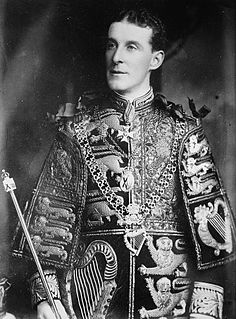 Sir Arthur Edward Vicars, KCVO, was a genealogist and heraldic expert. He was appointed Ulster King of Arms in 1893, but was removed from the post in 1908 following the theft of the Irish Crown Jewels in the previous year. He was killed by the IRA in 1921 during the Irish War of Independence.

James Terry was an Irish officer of arms who remained faithful to the Jacobite kings of Britain after their escape to the European continent. 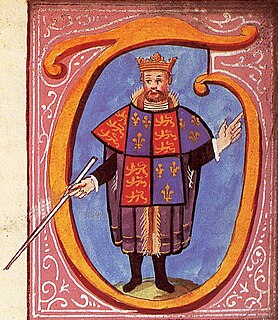 Thomas Hawley was a long-serving officer of arms at the College of Arms in London. He began his career of royal service as a groom porter to Queen Margaret of Scotland from her marriage in 1503 until 1508. Although he may have been made Rose Blanche Pursuivant in the reign of King Henry VII, his first permanent heraldic appointment came in 1509.

Sir Gerald Aylmer was an Irish judge in the time of Henry VIII and played a key part in enforcing the Dissolution of the Monasteries. His numerous descendants included the Barons Aylmer. 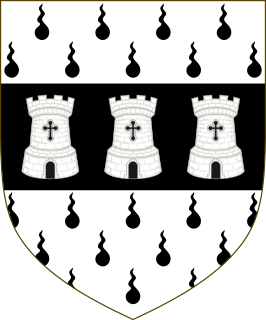 O'Higgins is an Irish noble family. Its Ballynary line is descended from Shean Duff O'Higgins, Gaelic Baron of Ballynary, who was married to a daughter of the royal family of O'Conor at Ballintuber Castle in Connacht. Shean Duff O'Higgins himself claimed descent from King Niall of Tara. Historically, many of their ancestors were poets and scholars who enjoyed the patronage of several chiefly families including O'Conor Don, MacDermott, O'Doherty, O'Gara, and MacDonagh.

Events from the year 1552 in Ireland.