The Atlas of Living Australia (ALA) is an online repository of information about Australian plants, animals, [1] and fungi. [2] [3] Development started in 2006. [4] The Commonwealth Scientific and Industrial Research Organisation (CSIRO) is an organisation significantly involved in the development of the ALA. [5] The Atlas of Living Australia is the Australian node of the Global Biodiversity Information Facility. [5] The ALA is being used to help assess suitability of revegetation projects by determining species vulnerability to climatic and atmospheric change. [6]

The Atlas of Living Australia is hosted by CSIRO and supported by the National Collaborative Research Infrastructure Strategy. [7] 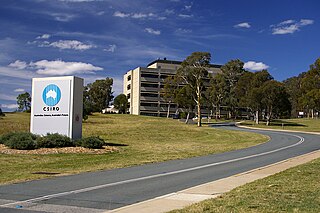 Ebbe Schmidt Nielsen was a Danish entomologist. Nielsen was influential in systematics and Lepidoptera research, and was an early proponent of biodiversity informatics. The journal Invertebrate Systematics was established with significant contributions from Nielsen and he assisted in the founding of the Global Biodiversity Information Facility (GBIF). Nielsen authored several books, published over eighty scientific papers, and was highly regarded within the scientific community. Following his death, the GBIF organised the Ebbe Nielsen Prize in his memory, awarded annually to promising researchers in the field of biodiversity informatics. The moth Pollanisus nielseni is dedicated to Nielsen.

Austromuellera is a genus of only two known species of medium-sized trees, constituting part of the plant family Proteaceae. They are both endemic to three restricted areas of the wet tropics rainforests of north-eastern Queensland, Australia. The genus was named in 1930 in honour of Ferdinand von Mueller by Cyril T. White. They lie within the tribe Banksieae within the family Proteaceae, their closest relatives the genera Musgravea and Banksia.

CSIRO Publishing is an Australian-based science and technology publisher. It publishes books, journals and magazines across a range of scientific disciplines, including agriculture, chemistry, plant and animal sciences, natural history and environmental management. It also produces interactive learning modules for primary school students and provides writing workshops for researchers.

Beilschmiedia bancroftii is a tree species in the family Lauraceae. It is native to Queensland in Australia. Common names include yellow walnut, yellow nut and canary ash.

William Thomas (Bill) Williams FAA OBE was an English and Australian botanist and plant taxonomist, known for his work on algorithms for numerical taxonomy.

Nothorites is a genus of a sole described species of trees, constituting part of the plant family Proteaceae. The species Nothorites megacarpus grows naturally only in restricted mountain regions (endemic) of the wet tropics rain forests of north-eastern Queensland, Australia. 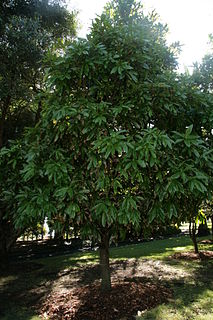 Lasjia is a genus of five species of trees of the family Proteaceae. Three species grow naturally in northeastern Queensland, Australia and two species in Sulawesi, Indonesia. Descriptively they are the tropical or northern macadamia trees group. Lasjia species characteristically branched compound inflorescences differentiate them from the Macadamia species, of Australia, which have characteristically unbranched compound inflorescences and only grow naturally about 1,000 km (620 mi) further to the south, in southern and central eastern Queensland and in northeastern New South Wales.

Helicia lewisensis is a species of rainforest trees, of northeastern Queensland, Australia, from the flowering plant family Proteaceae. It is endemic to the northern upland rainforests of the Wet Tropics region, from about 900 to 1,330 m altitude.

The Interim Register of Marine and Nonmarine Genera (IRMNG) is a taxonomic database which attempts to cover published genus names for all domains of life from 1758 in zoology up to the present, arranged in a single, internally consistent taxonomic hierarchy, for the benefit of Biodiversity Informatics initiatives plus general users of biodiversity (taxonomic) information. In addition to containing over 490,000 published genus name instances as at March 2020, the database holds over 1.7 million species names, although this component of the data is not maintained in as current or complete state as the genus-level holdings. IRMNG can be queried online for access to the latest version of the dataset and is also made available as periodic snapshots or data dumps for import/upload into other systems as desired.