The mission of the GBIF is to facilitate free and open access to biodiversity data worldwide to underpin sustainable development. Priorities, with an emphasis on promoting participation and working through partners, include mobilising biodiversity data, developing protocols and standards to ensure scientific integrity and interoperability, building an informatics architecture to allow the interlinking of diverse data types from disparate sources, promoting capacity building and catalysing development of analytical tools for improved decision-making.

GBIF strives to form informatics linkages among digital data resources from across the spectrum of biological organisation, from genes to ecosystems, and to connect these to issues important to science, society and sustainability by using georeferencing and GIS tools. It works in partnership with other international organisations such as the Catalogue of Life partnership, Biodiversity Information Standards, the Consortium for the Barcode of Life (CBOL), the Encyclopedia of Life (EOL), and GEOSS.

From 2002 to 2014, GBIF awarded a prestigious annual global award in the area of biodiversity informatics, the Ebbe Nielsen Prize, valued at €30,000. As of 2018, the GBIF Secretariat presents two annual prizes: the GBIF Ebbe Nielsen Challenge and the Young Researchers Award. [1]

The Intergovernmental Oceanographic Commission of UNESCO (IOC/UNESCO) was established by resolution 2.31 adopted by the General Conference of UNESCO. It first met in Paris at Unesco Headquarters from 19 to 27 October 1961. Initially, 40 States became members of the Commission. The IOC assists governments to address their individual and collective ocean and coastal management needs, through the sharing of knowledge, information and technology as well as through the co-ordination of programs and building capacity in ocean and coastal research, observations and services.

Ebbe Schmidt Nielsen was a Danish entomologist. Nielsen was influential in systematics and Lepidoptera research, and was an early proponent of biodiversity informatics. The journal Invertebrate Systematics was established with significant contributions from Nielsen and he assisted in the founding of the Global Biodiversity Information Facility (GBIF). Nielsen authored several books, published over eighty scientific papers, and was highly regarded within the scientific community. Following his death, the GBIF organised the Ebbe Nielsen Prize in his memory, awarded annually to promising researchers in the field of biodiversity informatics. The moth Pollanisus nielseni is dedicated to Nielsen.

The Inter-American Biodiversity Information Network (IABIN) is a network dedicated to the adoption and promotion of ecoinformatics standards and protocols in all the countries of the Americas, thus facilitating the sound use of biological information for conservation and sustainable use of biodiversity. It is primarily an inter-governmental initiative but has a strong participation of a wide range of non-governmental partners.

The National Biodiversity Network (UK) (NBN) is a collaborative venture set up in 2000 in the United Kingdom committed to making biodiversity information available through various media, including on the internet via the NBN Atlas—the data search website of the NBN.

The National Biological Information Infrastructure (NBII) was a program coordinated by the United States Geological Survey's Biological Informatics Office within the USGS Biological Resources Discipline. Its purpose was to facilitate access to data and information on the biological resources of the United States, utilizing government agencies, academic institutions, non-government organizations, and private industry. It was terminated 15 January 2012.

Plazi is a Swiss-based international non-profit association supporting and promoting the development of persistent and openly accessible digital bio-taxonomic literature. Plazi is maintaining a digital taxonomic literature repository to enable archiving of taxonomic treatments, enhances submitted taxonomic treatments by creating version in the XML formats TaxonX and Taxpub, and educates about the importance of maintaining open access to scientific discourse and data. It is a contributor to the evolving e-taxonomy in the field of Biodiversity Informatics.

The World Database on Protected Areas (WDPA) is the largest assembly of data on the world's terrestrial and marine protected areas, containing more than 200,000 protected areas as of October 2017, with records covering 245 countries and territories throughout the world. The WDPA is a joint venture between the United Nations Environment Programme World Conservation Monitoring Centre and the International Union for Conservation of Nature World Commission on Protected Areas.

Forest informatics is the combined science of Forestry and informatics, with a special emphasis on collection, management, and processing of data, information and knowledge, and the incorporation of informatic concepts and theories specific to enrich forest management and forest science; it has a similar relationship to library science and information science.

The “Biovision Foundation for Ecological Development” is a not-for-profit organisation involved in ecological and sustainable development projects for people living in Africa. With its basic principle of “help for self-help”, it promotes the preservation of natural resources. Biovision is also a global advocate for ecological thinking and action. Biovision projects are helping, therefore to achieve UN Millennium Development Goals. In 2012 Biovision was the first Swiss foundation to be granted General Consultative Status by the United Nations.

The Ebbe Nielsen Prize was an international science award made annually between 2002 and 2014 by the Global Biodiversity Information Facility (GBIF), to recognize a researcher who had made substantial contributions to the field of biodiversity informatics. The prize was established in memory of prominent entomologist and biodiversity informatics proponent Ebbe Nielsen, who died of a heart attack in the U.S.A. en route to the 2001 GBIF Governing Board meeting. 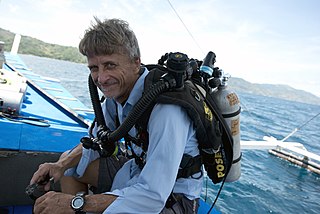 Richard Lawrence Pyle, Ph.D. is a scuba diver and ichthyologist working on Hawaii.

The Interim Register of Marine and Nonmarine Genera (IRMNG) is a taxonomic database which attempts to cover published genus names for all domains of life from 1753 in zoology up to approximately 2014, arranged in a single, internally consistent taxonomic hierarchy, for the benefit of Biodiversity Informatics initiatives plus general users of biodiversity (taxonomic) information. In addition to containing over 490,000 published genus name instances as at March 2020, the database holds over 1.7 million species names, although this component of the data is not maintained in as current or complete state as the genus-level holdings. IRMNG can be queried online for access to the latest version of the dataset and is also made available as periodic snapshots or data dumps for import/upload into other systems as desired.

The Ebbe Nielsen Challenge is an international science competition conducted annually from 2015 onwards by the Global Biodiversity Information Facility (GBIF), with a set of cash prizes that recognize researcher(s)' submissions in creating software or approaches that successfully address a GBIF-issued challenge in the field of biodiversity informatics. It succeeds the Ebbe Nielsen Prize, which was awarded annually by GBIF between 2002 and 2014. The name of the challenge honours the memory of prominent entomologist and biodiversity informatics proponent Ebbe Nielsen, who died of a heart attack in the U.S.A. en route to the 2001 GBIF Governing Board meeting.