Auckland Theatre Company (ATC) is Auckland's premier professional theatre company, it was founded in 1992 and since 2016 has been based in ASB Waterfront Theatre in the Wynyard Quarter in central Auckland.

Auckland Theatre Company (ATC) was established following the bankruptcy of Mercury Theatre Company, Auckland's original professional theatre company which had been the largest subsidised company in the country. [1] Founding Artistic Director was Simon Prast who was there from March 1992 until February 2003. In his time he directed and produced over 60 plays. [2]

Before the opening the ASB Waterfront Theatre, ATC presented their shows in many venues around Auckland. The most-used venues were the Kenneth Maidment Theatre (commonly known as The Maidment) in the Auckland University campus and the Sky City Theatre. Other theatres ATC performed in were Q Theatre, Civic Theatre, Herald Theatre and the Basement Theatre.

The role of Artistic Director is currently held by Colin McColl, who took up the position in 2003. [3] Since November 2008, Philippa Campbell has been the ATC's Literary Manager.

ATC presents a mainbill season of six to eight plays to people from throughout Auckland and the Upper North Island each year.

Auckland Theatre Company offices are located in the lower ground floor of the Mt Eden War Memorial Hall in Balmoral, New Zealand. ATC refit the space to include their administration offices, box office and two rehearsal spaces and moved to this Dominion Road space from Quay Street in December 2010.

In 2009, the company's productions included the classic Bruce Mason play The Pohutukawa Tree, directed by McColl with lead actress Rena Owen. The cast included Stuart Devenie who has also worked as a director for the company. [4]

In 2020 the Auckland Theatre Company presented an on-line production during the COVID-19 lock down, using the device of a Zoom meeting for the stage. It was adapted by Eli Kent and Eleanor Bishop, who also directed it, with rehearsals and performances carried out online. [5]

The premier show presented in the ASB Waterfront Theatre was the Auckland Theatre Company production of Billy Elliot the Musical , presented by ASB. The first preview was on October 7, 2016, and the official opening was on October 13, 2016.

ASB Bank, commonly stylised as ASB, is a bank owned by Commonwealth Bank of Australia, operating in New Zealand. It provides a range of financial services including retail, business and rural banking, funds management, as well as insurance through its Sovereign Limited subsidiary, and investment and securities services through its ASB Group Investments and ASB Securities divisions. ASB also operated BankDirect, a branchless banking service that provides service via phone, Internet, EFTPOS and ATMs only. 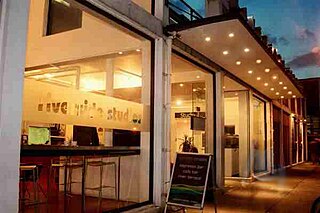 The Wynyard Quarter is a reclaimed piece of land on the Waitematā Harbour at the western edge of the Auckland waterfront, New Zealand.

The Court Jesters is a professional improv company founded in 1989 and based in Christchurch, New Zealand. It is a subsidiary of the Court Theatre professional theatre company, acting as a second company within the theatre.

Dean Leo Parker was a New Zealand screenwriter, playwright, journalist and political commentator based in Auckland. Known for the screenplay of iconic film Came a Hot Friday which he co-wrote with Ian Mune, the television film Old Scores and recent play Midnight in Moscow and was awarded Laureate of the New Zealand Arts Foundation in 2010.

Downstage Theatre was a professional theatre company in Wellington, New Zealand, that ran from 1964 to 2013. For many years it occupied the purpose-built Hannah Playhouse building. Former directors include Mervyn Thompson, and Colin McColl. 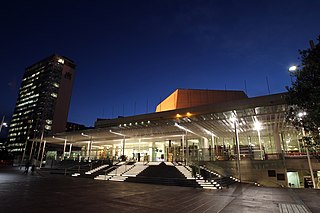 The Aotea Centre is a performing arts and events centre in Auckland, New Zealand. Located at the western edge of Aotea Square, off Queen Street, the centre provides a cultural, entertainment and conventions venue space in the heart of the city, and is managed by Auckland Unlimited. The origin of its name is Motu Aotea, the Māori name for Great Barrier Island, which is the largest offshore island of New Zealand and approximately 90 km from downtown Auckland.

New Zealand Opera is New Zealand's only full-time professional opera company, formed in 2000 from the merger of companies in Auckland and Wellington, and later Christchurch. The company is headquartered in Auckland.

Philippa Campbell is a New Zealand film and television producer and the Literary Manager at the Auckland Theatre Company.

Colin William McColl is a New Zealand director in theatre, opera and television. He is a leading figure in the world of professional theatre in the country, winning numerous awards as well as working internationally with major national companies. McColl's career spans more than 30 years in the performing arts where he has also been an actor and a producer. He has won Best Director at the Chapman Tripp Theatre Awards three times, received the prestigious Arts Laureate Award in 2007 and was made an Officer of the New Zealand Order of Merit in the 2010 Queen's Birthday Honours. McColl was born in Lower Hutt in Wellington, the country's capital.

Simon Prast is a director and actor from Auckland, New Zealand. Prast was the founder of the Auckland Theatre Company and director of the first Auckland Festival AK03.

Atamira Dance Company is a Māori contemporary dance company in Aotearoa based in Auckland.

Pop-up Globe was a New Zealand theatre production company, based in Auckland, New Zealand. It produced Jacobean theatre, particularly the works of Shakespeare, in specially-built temporary replicas of the second Globe, the theatre Shakespeare and his company built and used. The company’s theatre is the world's first full-scale reconstruction of the Second Globe Theatre (1614–44).

Megan Mary Wraight was a New Zealand landscape architect who had considerable influence on the design of public spaces. She was the founding principal of Wraight + Associates Limited, which has completed a wide variety of large-scale urban projects throughout New Zealand, including waterfront redevelopments, educational facilities, transport facilities and urban-renewal projects.